Just like this fine website and its parent company, high-end gaming PC company Alienware is based in Miami, Florida. We were surprised to hear that our neighbors would also be making the trip to Tokyo, Japan for the 2009 Tokyo Game Show, though. They made a big to-do about some “invasion,” so we made it over to their crash site today to check out what all the hubbub was about.

Scratch those daydreams of something like a new mobile product or gaming netbook from Alienware. The “invasion” was more literal; Alienware is now selling their products to Japanese gamers. This was more of an offering rollout than a new announcement.

Their black booth housed computers so big that I couldn’t even imagine one in a small Japanese apartment. Gaming monster Area-51 were shown on the floor, running games like Resident Evil 5 and Bionic Commando. These were decked out with Intel Core i7 processors and overclocked to the max.  Smaller and cooler-looking Aurora systems had similar specs, but in boxes that may make a bit more sense for the Japanese market. 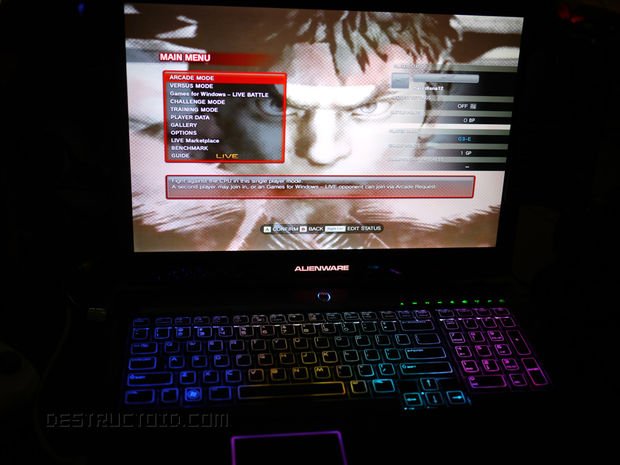 I think the notebook computers made a better showing. Maybe their size had something to do with that. Alienware’s monster laptop M15x got plenty of attention from Japanese press, though it may have had something to do with Street Fighter 4 running on each system, complete with Xbox 360 controllers to game on. All the keyboards were lit up and lovely, and representatives were showing off Alienware’s slick computer customization software, now freshly translated to Japanese.

Alienware is wasting no time. Literature citing system specs and build-to-order options were already available on the floor for the Japanese public. I believe they were even pushing a free headphone with computer purchase option. It remains to be seen if Japanese gamers will be responsive to this type of hardware, though. We wish our neighbors luck on their new ventures.