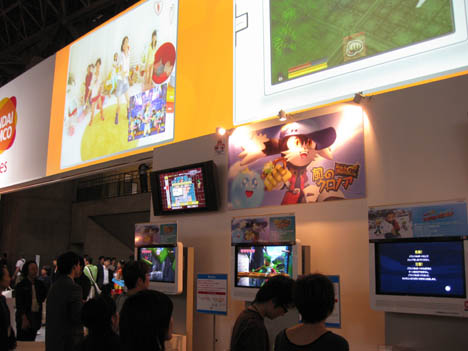 Just last week we recieved word at a Nintendo press event that the classic PlayStation platformer Klonoa: Door to Phantomile was coming to the Wii after a fresh makeover. Lucky for us, Namco Bandai brought a build of the remake to TGS 2008 for us to play.

Namco’s flying cat/rabbit…thing platformer has never looked better, and by looking at it today, you’d never know it was a game from 1997 on the PlayStation. I had a chance to play the game’s world 1-1 during my demo time. It’s the exact same stage layout as the game from 11 years ago, but now everything has a slick polish. Naturally, there are more polygons packed into this sidescroller, and the textures are better and colors brighter.

Those that have played the original will remember that the first stage moves from an outdoor area to a dimly lit underground mine. It was here that I was able to see examples of slick lighting and deep colors that I do not remember from the original. Also, Klonoa himself has moved into the 3rd dimension. In the original version, he was a 2D animation on a 3D background.  Although Klonoa‘s new look does nothing for the gameplay, it still looks fantastic, and that never hurts.

The gameplay has not changed one bit, except for the fact that you’re holding a Wii Remote instead of a PlayStation controller. The Wii Remote is held sideways, with the d-pad and 1 and 2 buttons being used for action. I forgot how fun the ear flapping and animal flinging were until now. Even though it’s been awhile, I was quickly brought back to the simple and inviting platforming I experienced a decade ago. Klonoa has definitely aged well. I didn’t want the demo to end after one stage.

We know that Klonoa: Door to Phantomile is coming to the Japanese Wii on December 4th for 4,800 yen. There’s no word on a US date, but I see no reason why this won’t come to the States.