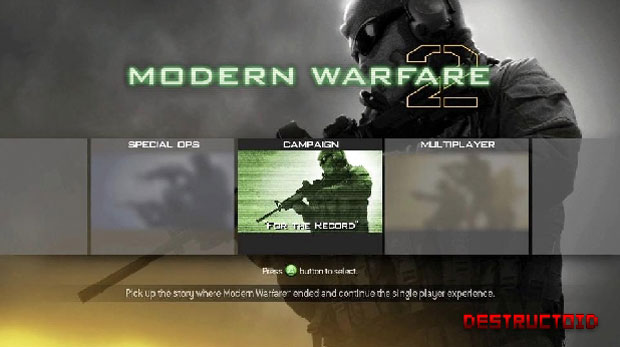 The console versions of Call of Duty: Modern Warfare 2 launched this morning. Hundreds, probably thousands of retailers did a special midnight release in celebration of the billions of sales sure to come in. If you care a lot about MW2 you probably stood in line at a said midnight release and rushed home to get to work on the anticipated follow-up. Unless you went straight to multiplayer, you’ve probably already seen the below ten minutes of footage from the game.

But if you haven’t, here you go: the first ten minutes from MW2. The game starts with a bit of a tutorial, illustrating the firing mechanics and typical tutorial stuff. There’s nothing spectacular here, but there are a few notable things that can be observed: the brilliant visuals, the fresh(er) quick-snap aiming, and me attempting to play basketball.

I’ve only put a few hours into the game thus far, so I don’t feel confident in lobbing any sort of criticism or praise. I can say, though, that this is definitely the sequel to Call of Duty 4: Modern Warfare in more than a few ways — the game feels familiar, but I’m also catching spots of innovation and refinement. You know, the kind of stuff you’d expect from the sequel of a popular game.

The video is after the jump. So, how are you guys digging MW2? What about the first ten minutes?

Filed under... #Call of Duty#Top Stories