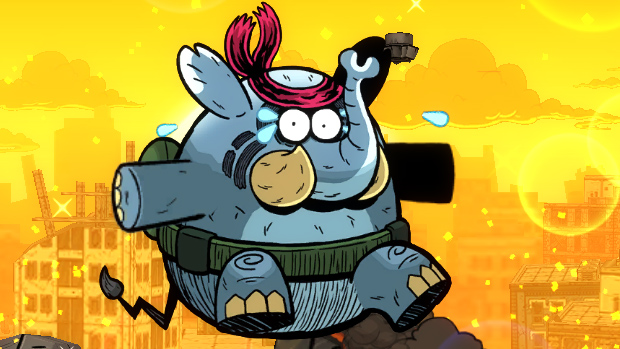 Tembo the Badass Elephant, the newest game from Pokemon developer Game Freak, is a bit of a departure from what you might expect of the studio. Centered around Tembo, an elephant who seems to have taken a lot of his fashion cues from Rambo, you are challenged to smash your way through environments killing super villain-esque soldiers, rescuing human hostages and stuffing your face with peanuts.

The first thing to note about Tembo the Badass Elephant is how instantly charming it’s presentation was. From the pleased smirk he gives when gobbling down a jar of peanut butter to the was his momentum skids to a halt after speeding across a level, the animation and design for Tembo and his world were both instantly endearing. Game Freak have created a character who right from the start I wanted to see more of. That’s no mean feat, so I will applaud Game Freak for that. Any character who does a Yoshi style kicking their legs slow fall animation is a hit with me.

In terms of the gameplay, Tembo is a mix of Sonic-esque speeding through levels, Mario Sunshine reminiscent platforming and Guacamelee! themed combat. Before you get your hopes up, it does not do any of these three aspects as well as the comparison points might suggest.

You have a charged run attack which will flatten anything directly in front of you and see you speed toward the end of the level which is where the game feels most polished and rewarding, but these runs smashing through environments are interspersed with platforming and combat.

The platforming sections require getting your lengthy and heavy character pointed toward fires or plants, spraying water on them and jumping between safe platforms. The issue currently is that due to Tembo’s length, he’s hard to move small distances and reposition without falling off platforms. Getting his trunk in the right spot mid platforming was at best a nuisance and at worst a frustrating barrier to progression.

The combat feels like it was aiming for a Guacamelee! style combo string system but fell short. You can charge your character forward, have them leap mid charge, ground pound, swing your hammer like trunk in four directions and in theory string these together to get through enemies. The problem is that Tembo is slow and sluggish, meaning that more often than not just charging head first into combat was more effective than trying to do any kind of intelligent combat maneuvers.

Also important to note is that the build at Rezzed was riddled with framerate dips and moments of notable input lag that soured my experience considerably. The person on hand at the booth insists these are due to the fact I played the game within 24 hours of it being announced and it was a very early build, but it’s certainly something to be aware of and keep an eye on.

Ultimately I like the character, presentation and design of Tembo the Badass Elephant in theory, but in practice it’s not yet selling me that it’s going to be able to pull off it’s aims. I’m certainly going to keep an eye on it going forward, but it’s a cautious eye.