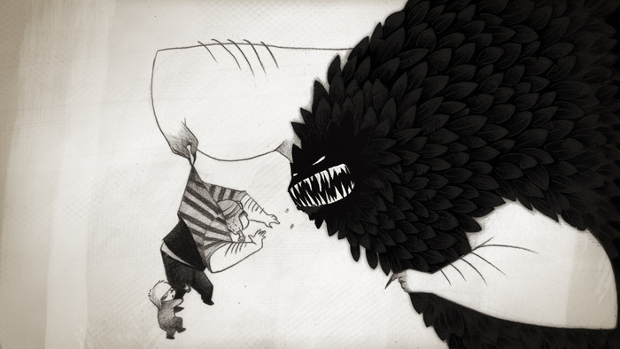 A lot of people were disappointed to hear that Mighty Number 9 is using the Unreal Engine to produce visuals that didn’t look too much like the 2D-style used in the game’s promotional art. I’d advise those folks (and all fans of hand drawn videogames) to get behind Tax Journey — a lush, sweetly stranger adventure game planned for Wii U and PC, with other consoles to follow if stretch goals are met.

It’s one of those games that I imagine would meet it’s funding easily, as it has charm and ingenuity to spare. The gameplay looks simple but thoughtful, requiring players to experiment with all objects on screen, traveling in and out of the background, putting things together in surprising ways. Sadly, it hasn’t caught on yet, though the developers are still hopeful and appreciative of the support they’ve seen so far. Even if they only hit $40K of their goal, they’re going to send every backer some original digital art with their name on it.

Neverending Nightmares was another inventive, hand drawn-looking game that was pretty far from meeting it’s goal a week out, and it managed to pull it together at the last minute. Lets hope that Taxi Journey does the same.