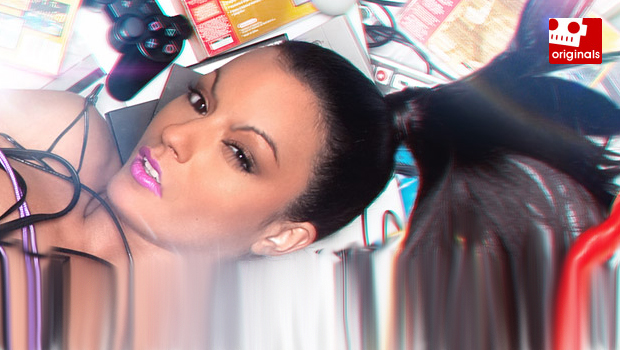 When Tara Long and I first started doing The Destructoid Show almost a year ago, we immediately starting sizing up the competition. During one of these late-night research sessions, I stumbled upon a show that featured oily women in bikinis holding fake guns, robotically and humorlessly reading the videogame news.

At the time, their show had about ten times as many views as ours, without any promotion from major outlets like Revision 3 or Destructoid. They also claimed to be “the progressive new voice of female gamers.” It was pretty intimidating.

Initially, I tried to brush the show off as just more proof that sex sells, and that people will say anything in the pursuit of self-promotion. Upon further examination, I’m not sure if it’s quite as simple as that. That’s part of why I hit the streets to ask Jane Q. Public about Playboy and Destructoid’s recent Nerdcore team-up. In case you couldn’t tell, I love Jane Q. Public! She is great.

Read on for more thoughts on the psychology of nerdcore, and the potential differences between a sex object and a sexy subject.

I think a big part is that, 20 years ago, we didn’t have legions of men who had grown up as gamers. Sure, there were men in the ’80s and ’90s who had a passion for Super Mario Bros. and Donkey Kong, but the “gamer” as a pseudo-social class didn’t really exist. Now that there is a culture and a stereotype to go along with the idea of “gamer,” we naturally have fetishes to go with them — nerdcore.

So why do gamers want to combine sex with gaming? Why is nerdcore a thing, while seeing women pose half-naked with baseballs and/or hubcaps over their private parts has yet to become a pornographic phenomenon? The answer is pretty simple — a lot of gamers are desperate for women to accept them and their love of gaming.

Gaming and other aspects of “nerd culture” are definitely in the process of becoming normalized and accepted by American culture at large, but they still has a long way to go. How recently did Kathie Lee Gifford say that if you’re an adult who plays videogames, you’re weird? How many weeks ago did “nerd culture” at large lose its shit when a Gawker Media writer made it clear that a man’s mastery of Magic: The Gathering was an immediate deal-breaker for her?

What I take from this is that gamers (both male and female) are still prone to assuming that they are less likable and less likely to find love because they are gamers. For that reason, the idea of an attractive potential mate who wants to rub videogame consoles and accessories all over her body — because she presumably loves gaming (and therefore gamers) that much — strikes a primal urge in some people. Like most pornography, nerdcore is just another primitive tactic to exploit the insecurities and reproductive urges of human beings. Not very honorable stuff. That said, nerdcore isn’t all bad, at least in theory.

The thing about nerdcore that has me ever so slightly encouraged is that, at its best, it at least tries to add some burlesque sensibilities to the often purely objectifying world of pornography. In burlesque, the performer is there to be related with, even looked up to. Burlesque performers express their sexuality for their own enjoyment, and not necessarily for the enjoyment of the viewer. To be clear, I didn’t get much of a burlesque vibe from the Jo Garcia video we posted last week. To me, it came off as shameless pandering, with a touch of self-parody. I expect most men will view her as a sex object to be lusted after in the moment, then forgotten as soon as their erection hits the road. She’ll be swept away to the furthest recesses of their brains, along with all the other non-essential information they’ve come across on the internet.

Compare that to a sexually charged but easy-to-identify-with subject like Jessica Chobot. Past the surface-level similarities, the differences as staggering. Ms. Chobot’s entire career was launched by that “licks a PSP” moment, proof that for whatever reasons, her take on nerdcore was anything but forgettable. My guess is that that picture resonated with so many gamers because Ms. Chobot really did love the PSP to the point of near-sexual passion. That’s something that many gamers related to. Millions of men and women have had true, affectionate, romantic crushes on Ms. Chobot due to that picture, crushes that came from a genuine sense of connection to her.

Sure, part of that is just a variation of the old “I want to love someone who is as much like me as possible” narcissism that has been screwing up romantic relationships since the dawn of man. Still, it’s better than the whole “women make the sex and babies, men make the money and punch the faces” routine that so often makes the romantic lives of men and women a living hell.

Before I forget, everything I’m saying here is applicable to female videogame characters as well. For me, Lollipop Chainsaw‘s Juliet Starling is like Jessica Chobot — an attractive woman whom I have absolutely no trouble relating with (as we both seem to love the idea of fending off lustful zombies with chainsaws). On the other hand, characters like Bayonetta (and to a lesser extent, Lara Croft) come off much more like gamer-girl-next-door Playboy Playmates to me — hilarious self-parodies at best, exhausting exercises in the art of pandering at worst. Of course, that’s just me. Everyone’s ratios between lust, admiration, and potential for objectification vs. relation are all bound to vary, especially when it comes to our gaze and exactly where it lands on other human beings (fictional or otherwise). I’d like to go on about that, but this sucker is already getting long. Maybe next time.

Back to the point, what I’m hoping for is that the gaming industry and gamers themselves come to recognize that all gamers want is to be accepted. You don’t need to show a woman in her underwear playing videogames to gain a heterosexual male gamer’s affection. Just having a woman who genuinely enjoys gaming will be enough (assuming she is also charming and admirable). Just look at the continued success of Ashly Burch of Hey Ash, Whatcha Playin’? fame. She didn’t need to take off her clothes or otherwise pander to the gaming community to gain success. All she needed to do was be a smart, funny, and genuine human being who loves videogames.

Sure, she may not have gotten by on those traits alone — luck, cuteness, and her chemistry with the other cast members of HAWP definitely had something to do with it. Still, I believe that it’s Ashly’s blatant love of gaming that makes her stand out. In a world filled with wannabe actresses and models who feign interest in gaming just to attract the attention and admiration of an alienated male audience, someone like Ashly (and Tara Long and Hollie Bennett and Pico Mause) is bound to stand out from the crowd.

Knowing that, it’s especially sad and ironic that I’ve met many attractive, good-natured women over the years who love videogames, but have made it clear to me that they’ve been repeatedly shunned by men for that fact. It could be because the men in question hate gaming, that they are threatened by the fact that a woman may be better at something they’ve defined their “gamer masculinity” around, or because they just can’t relate to other people very well. Either way, female gamers often feel feel unaccepted by the opposite sex too. I wouldn’t be surprised if we see a female-friendly version of nerdcore pop up sometime soon, though I’m not sure exactly what that would look like. Maybe some of you folks out there in the audience, the ones who find men sexually attractive, could entertain a few guesses for me.

Anyway, tl;dr time — a video about a person pretending to be both horny and a videogame fan at the same time is bound to work to make gamers of both genders feel insulted and exploited in the long run (and maybe aroused, though they may not want to admit it). Gamers don’t want to feel exploited; they just want to feel genuinely accepted (sexually and otherwise) by both gamers and non-gamers alike. I’m not so sure that bikini-clad women bouncing on beach balls while playing Dead Rising, a woman faking an orgasm while also faking a game of Pong, and “booth babe” culture in general are helping us to get closer to that feeling. I think we’d be better off focusing less on models trying to sell us on the idea that they’re gamers, and focusing more on relating to each other. That said, I don’t claim to have all the answers.

What do you guys think? Is this nerdcore stuff helpful, harmful, or too stupid to really matter to gaming culture?

Filed under... #Destructoid Originals#Talking to Women about Video Games#Top Stories