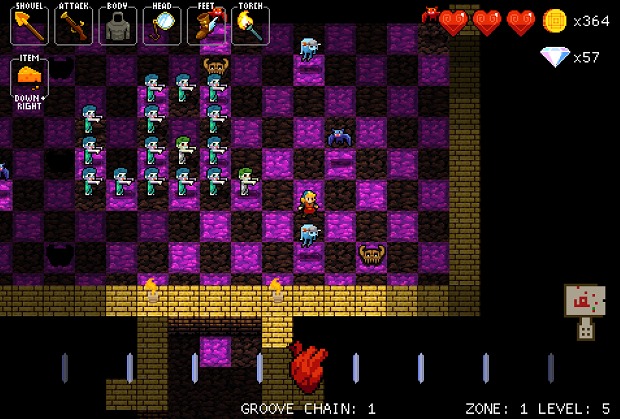 We named Crypt of the NecroDancer one of our PAX Prime 2013 games of the show, despite its location in the eternally cramped and sweaty Indie Megabooth, and for good reason. Roguelikes may be in vogue right now, but none until NecroDancer has had the idea to fold rhythm gameplay into the genre.

I spent a bit of time with the title at PAX, and after multiple plays, I’m sold on not only the idea, but also the execution. 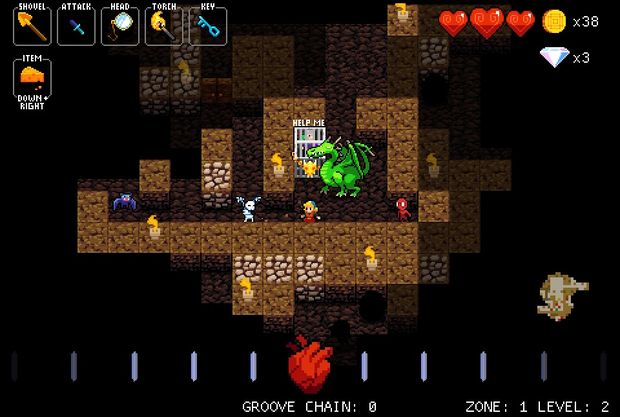 The basic premise of Crypt of the NecroDancer is a familiar one: players are dropped into procedurally generated dungeon, tasked with finding the exit to a floor and getting as far down as possible. Each run is unique and each death forces a restart, though in the PAX demo, players could choose in which area to restart. What sets it apart from a traditional roguelike are the rhythm elements that take the place of turn-based gameplay.

The game is controlled using only the four cardinal directions, with attacks occurring automatically upon moving toward a monster while adjacent to it. The key element is that while this is occurring, a song with a heavy beat is playing, and only moves that are executed on the beat are valid. Any panicked attempts to run off beat are penalized by essentially losing that move, opening the protagonist up to attack from nearby monsters.

What results is an almost real time roguelike more akin to Spelunky than to Rogue itself. With limited time to make decisions, even simple situations can go awry pretty easily. Even though monsters move on either a set path or with very simple AI instructions, puzzling out the most efficient way to handle a particular room is made very stressful by the beat matching mechanic. 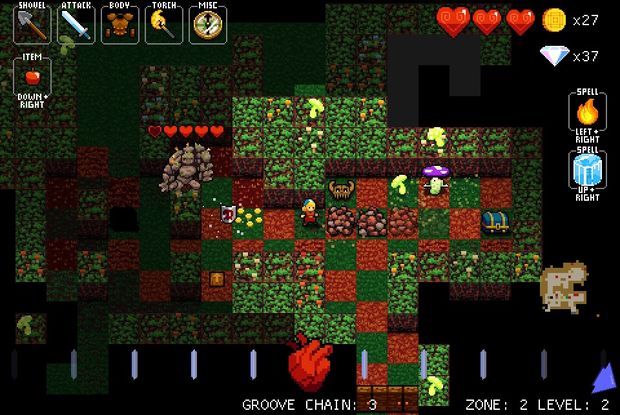 The soundtrack is composed in part by Danny Baranowsky, who famously provided the tunes for Super Meat Boy, and it certainly serves its purpose to keep the player moving to the music, both in game and out. For those wanting more variety, custom soundtracks can be imported.

Though the main conceit of dancing through a dungeon is easy to process and the controls are simple and easy to use, the game is properly difficult. On my first run, I made it to the second area where I was ambushed by a huge dragon and very quickly destroyed. Sneaking in a second run, I defeated the dragon, but didn’t make it far into the third level before biting it. As with most great roguelikes, the onus of improvement falls entirely on the player.

One really neat feature that stems from the simplified control scheme is that Crypt of the NecroDancer can be played with a variety of input systems, including Dance Dance Revolution dance pads. The booth at PAX had one set up, and it added a whole new layer of difficulty. While I won’t be utilizing one myself, I can imagine a community of freestyle dancers making NecroDancer a YouTube hit. It was already a huge hit at PAX, after all.