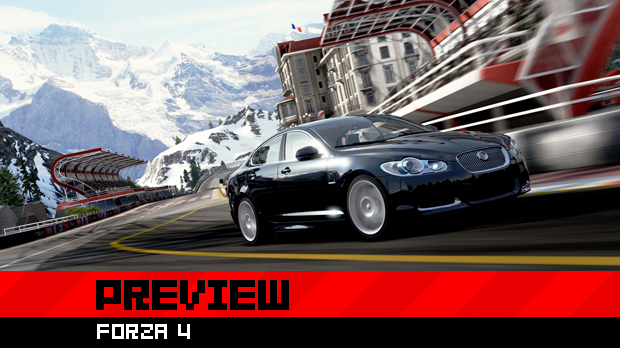 The Forza series has been a driving simulation staple on Microsoft consoles for years now, offering players an experience that has often rivaled Sony’s Gran Turismo series in terms of graphical finesse, car handling simulation, and an enormous selection of cars to race with.

Like other simulation racers, the Forza series offers many tuning options suited for gearheads and a progression system that awards vehicles and brand loyalty through winning several different cups and championships. One way that Forza has always excelled beyond other simulation racers, however, is its deep levels of customization — even the most casual player can get into creating a vehicle that matches their own style of racing. This was especially true in Forza 3, an excellent racer by any standards that brought together the best of the franchise while refining controls and polishing graphics.

Now that the dust has settled over the limelight of Forza 3 and the newest chapter of the Gran Turismo series has finally come and gone as a suitable enough contender, gamers have found a great gap in the availability of excellent new simulation driving games. While there have certainly been attempts made by other developers (as seen in EA’s Shift series), nothing has really come close to what either of these behemoth franchises in the driving simulation field have historically offered.

Does Forza 4 have the horsepower under its hood to change all of this? When I had the chance to get an in-depth preview of the newest iteration in the series, I set out to find out just that.

Turn 10 Studios’ Dan Greenawalt was on hand to give a quick 30-minute presentation in which he went over the design philosophy of the series (and of the latest game in particular). Greenawalt described Forza 4 as a way to bring everything together from earlier iterations of the series as well as to showcase the best of Xbox. Greenawalt made sure to mention both Xbox Live and Kinect functionality, two of the biggest focuses for Microsoft’s business plan going into the future.

Though we didn’t get an actual live demonstration of the new Kinect functionality for this speech due to the number of journalists (and possible sensor interruptions) in the room, Greenawalt used a 360 controller in tandem with descriptions of his actions to explain how Kinect works with Forza 4. While there is certainly all of the expected voice command and menu navigation functionality in place, the most innovate wrinkle comes with the new AutoVista mode, which gives a player the experience of getting up close and personal with flashy, exotic cars in a virtual showroom. These vehicles get unlocked through career progression, though they’re not necessarily the same cars you’re actually purchasing and racing with.

I can tell you that even without using Kinect and that added layer of virtual reality, the AutoVista mode is probably one of my favorite additions to the series. This is primarily because you’re able to actually open various compartments of your car to get a better look, all the while getting an informative and often humorous narration from Top Gear‘s own Jeremy Clarkson. Open the hood and get closer to the engine, and you’re inundated with facts about the horsepower of your given vehicle and the time it takes to get from 0 to 60 and beyond. Climb into the driver’s seat and get a look at the steering wheel, and you’ll be told various other details about the design of the car or famous races that the model has been in. This is pure and unbridled car porn, and for someone like me who usually has little interest in automotive design and is more focused on how fast a car will go and if it will win any given race, it is a wonderful introduction to the world of cars that can appeal to even the most casual of racing fans.

During my actual hands-on time with the game, I managed to unlock quite a few AutoVista vehicles, including a Ferrari 458 Italia, a 2005 Ford GT, a 2010 Lexus LF-A, and a 2011 Mercedes-Benz SLS AMG. Though I didn’t get a count of how many other unlockable cars existed in this mode, there was certainly a fair amount, and Turn 10 Studios promises many more cars for both this and the regular career modes in DLC form in the future as completely new actual car models are released to the public.

Once Greenawalt was finished with his presentation and I finally got a controller in my hand, I immediately launched into the career mode, aptly titled “World Tour Mode.”  The interface for this mode is incredibly slick, starting from a Google Earth view of different race locations and zooming down to a picture-perfect satellite shot of the specific racetrack (highlighted as a white line) that your next set of races will be taking place on. This is also narrated (sparsely) by Top Gear’s Clarkson, and it’s obvious that the show’s influence trickles down to every aspect of Forza 4, including competing in actual challenge events sponsored by the television series.

After winning three races, I was whisked off to England to compete in one such challenge, which involved speeding around a track and attempting to knock down as many bowling pins as possible, with gold pins counting as more points towards the ultimate goal. This challenge was both tough and a lot of fun, as I careened my Miata around corners to fishtail as many pins in a single fell swoop as I could. This was actually required to rack up the points, as the gold pins sat in more outlying areas of the track’s curves.

A lot of balancing has been done in Forza 4 to extend the gameplay to a more mainstream audience, especially in the earlier parts of the career mode. During the first few races in World Tour Mode, I could pick any one of three cars and be confident that it would be automatically tuned and balanced to match the capability of any of the other cars I had chosen. As you progress through the World Tour Mode, the options become more varied, with over 500 cars total to choose from (and an additional 10 cars promised every month as DLC).

Naturally, there is also a gradient of difficulty levels extending all the way up to Veteran mode, which includes tougher AI opponents, full damage modeling, manual shift only, and very realistic car physics that could easily send you into the dirt if you took a turn like an arcade racer. After gradually getting a handle on the controls and the different tracks, I actually decided to switch to Veteran Mode for a laugh on my last run. Even though I can’t say that I handled manual shifting all too well, I did still somehow manage to finish first and was ‘only’ penalized about one third of my winning credits for the amount of damage I took.

I spent a good chunk of my preview time simply racing in World Tour mode, gaining ‘Affinity Rewards’ from different automotive brands for successfully winning races. These rewards gave me discounts on my chosen brand, whether it was Toyota, Ford, or something a bit more exotic such as Alfa Romeo.

The race progression sees you flying all over the world, and I raced in places as typical as the St. Petersburg Sunset Peninsula Raceway in Florida and as exotic as the Bernese Alps in Switzerland. Much of the graphical sheen seen in Forza 3 extends to this latest iteration, with photorealistic modeling and polished detail on every racetrack. The game also seems like an instant draw for Achievement whores, as I found myself gaining several Achievements in the span of three or so hours from doing things as simple as getting a perfect turn on a track, painting my car, or gaining new levels of progression in the career mode.

The biggest takeaway I can offer from my time with Forza 4 was simply that I wanted to keep playing — so much so that I had to be told by one of the PR guys that my time was up and I had to go. From my time with the game, it became inherently obvious that Turn 10 Studios knows what they are doing to keep a dedicated fanbase in love with their series and to even bring in new fans through smart balancing and the appeal of a popular television series that can teach even the most clueless driver a few things about the beauty and grace that is the automobile.