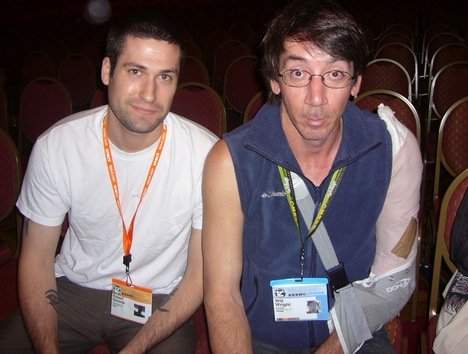 Will Wright is about to speak here at South by Southwest and I’m sitting right here ready to give you all the goods he’s about to drop. Hit the jump for the live blogging action … sexy.

Talking after: Confirmed for second half of 2007 and the reason things looked a bit early is because some features were turned off. 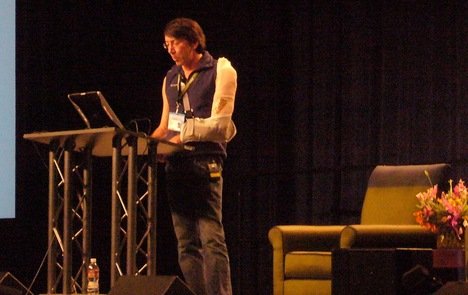 2:07: They are just now introducing Will. Talking about how cool he is. Some guy that looks like Tucker Carlson is doing it.

2:09: Will Wright comes to the stage. He broke his arm or something. It’s in a cast and he’s got a sleeveless T. Just said he broke it skiing.

2:10: Said he’s going to talk about storytelling and then about Spore.

2:11: Will said he hates stories that computers try to tell him. Will looks at the world as a simulation.

2:12: Story is all about causal change. Games primarily interactive. Once you take control away from gamer, then the video game loses its meaning. Games are inherently branching trees.

2:14: Empathy is most important to Will in a story. Game appeal to the reptilian brain, he says. Things he feels in games that he doesn’t feel in a movie, like pride, accomplishment, guilt and expression. The appeal is empathy, he says. Games is more agency, that he’s causing things happening.

2:16: Will is a hella fast talker. He wasn’t kidding when he said he had a lot of coffee.

2:18: Still going on about story. Relating things to movies like Star Wars and Indiana Jones. He showed this hilarious slide with Darth Vader and coming up with the Death Star. *note to self: must find this picture somewhere*

2:21: Talking about differences in movies like The Matrix and Fight Club and their ways of storytelling and the story chain. Brings up Memento and the causal chain.

2:22: Groundhog Day is one of his favorite movies. He says that movie is more like a video game. He said basically it was a game. Film maker was able to use your imagination and that’s something we should be doing in games, Will says. Why don’t we just let players skip a level?

2:24: Now talking about game and player stories. Bringing up adventure games and branching stories — choose your adventure, etc. Gated story is more common. Open-ended. It’s open ended, then you have to find something, then open ended again. Brings up Zelda and topology and different branches and gates. He says they are throwing data at the problem. Downfall of story approaches.

2:26: Stroy fragments have more potential. Moving and flowing options. Maneki Neko is one of Will’s most favorite stories, it’s by Bruce Sterling.

2:28: Talking about this generation of YouTube, MySpace and molding our media. Technology is player centered now. Masses are empowered to make own cool stuff and share it. More interesting for Will to watch people play games and make up stories about what they did in the game — basically something not scripted. He likes unintentional story — brings up the Sims and the bugs in it.

2:30: Will is more excited about what people do with a game, not what a game does to the person.

2:31: Talking about the Sims and how people shared their stories. The game became like a musical instrument and a story telling tool. People were writing stories about their experience in Sims and fictional stories within Sims.

2:32: More interesting to think about listening to a story instead of telling. It’d be better if the computer listened to our story and not vice versa. Want to look at story on different levels and have the computer understand where it is going. The computer figures out the epic struggle. If that happens, we can change the presentation of the story — lighting, even events. Rather than random events, the computer drives the story to bring clarity.

2:34: Says all that basically describes how The Truman Show was. He says Groundhog Day and Truman Show are the best examples of linear entertainment and relating to video games.

2:35: Talking about the video game rule, the “magic circle” and how there are boundaries that try not to get crossed. Will is spitting hot fire at such a rapid rate. I’m really trying to keep up. The guy is a genius.

2:36: Games are diversifying across time and space. Video games are in a cultural overtake process. Rather than games just be about story, they are evolving to hobby as well. Because of tools, we are fulfilling aspirations a lot easier.

2:38: We found that players love making content. There’s a quality vs. quantity issue here. Some good, a little is great, but with better and better tools then quality can increase. He just flashed a slide of Spore.

2:40: Showing various slides of social interaction figures. Now going to talk about Spore — collection of all these ideas he’s been talking about. Take assetts and collect them on a server. How do we close this loop and allow people to distribute them. Wants the player to be like George Lucas, the creator, not Luke Skywalker.

2:43: He’s starting up Spore. Opening screen is a galaxy. You can name your planet. Genesis of Life is first menu. Showing beginning creature. Going around eating food pellets. Creature growing as he eats. Looks like simple clear good stuff that he’s swimming in. Looks really cool actually. Never seen this before. There’s little enemy creatures he’s running from. There’s crystals and such in there. He just got eaten.

2:45: Moving on to Develop Intelligence. Skipping ahead. Now on land. Game looks very early, choppy. Plants are just popping up. Wow, this is how far along it is? 2008 anybody? I’m so disappointed right now, I thought the game would be further along. Maybe he’s holding out on us.

2:46: Will’s character just died again. In that level, textures just kept popping up randomly, like they were taking a long time to load. Showing character creation now. Same thing we basically saw at E3. Not a whole lot has changed, though the UI does look a tad more polished, of course.

2:47: He put mouths on his character’s arms and put an eye in place of the face. Parts have little morph handles. Each part represents hundreds of potential states. I’m not joking, this game looks far from complete. I’m thinking this is some sort of curveball or we’re not seeing this till next year.

2:48: Computer analyzes everything and every creature will move uniquely. You can test it all out before you go in the world. Your creature can dance and do a pose for snapshots. Can keep a photo album and email to a friend.

2:49: We are closing the loop. The player is creating their world. Game is still cute and I want this damn thing. I just hope it comes out this year. Textures are taking FOREVER to load. He’s basically now just showing off what he showed at E3 — it actually looked better at E3, graphics and performance wise.

2:50: Now moving on to Space Age. Wants to bring up issues with the world. Said he wants kids to build not be taught.

2:51: Now showing a more advanced planet. Kind of empty and very simple. Brings up UFO editor that has a Star Trek ship in it. Flying around with Star Trek ship. He wants interstellar wars between Care Bears and Klingons. Wants a toy planet people can mess around with — climate change, etc. Planet is a lump of clay. He is changing planet with his ship. Frame rate is kinda bad. But looks neat. He’s now putting in greenhouse gas and such. Very cool. People will get divorced because of this game.

2:53: He is melting the ocean and planet. Species are all about to die. He just melted the entire planet. Looks really really cool. Long term dynamics over the short term. He said humans have a hard time with long term thinking. Wants to use this as a tool to calibrate imagination and think long term. Pulls back to show solar system and flies to another planet. There is some primitive life on this planet. He wants game to be focused on landmarks. The UI menu system looks really complicated. He just dropped a monolith from 2001 onto the planet to get the creatures to gather around it. He says you come across a monolith much later in the game. He’s looking at favorite Sci Fi movies and the landmarks there are. Creatures worship around monolith and evolve faster. He can try to get creatures to worship him as a god as a result.

2:56: He can scan the creatures and enter it in encyclopedia — Sporepedia he calls it. Running database of every single thing you see and do in game. Wants trading card games as a result.

2:58: Now in interstellar space. Wow this game is huge. He’s moving from galaxy to galaxy. Simply incredible. Wants a simple environment where player can go around, kind of like a zoo and see things. Wants people to have context. Showing how some systems are still being born and such, incredible.

3:00: Basically, that is Spore. He is going to be wrapping up now. Back to the Power Point presentation.

3:02: Computers extend our imagination. Technology is leading to more paradigm shifts. We have more coming our way. Games have perception of being simple toys, but they can be more than that. They can have deep changes. They allow us to build more accurate models of the world around us.