Take it slow and steady

Superhot has been the talk of the town ever since it was first shown off to the world. A first person shooter where the action slows to a near stop unless you’re currently moving, the game’s visual style and odd momentum are nothing if not eye catching. As someone who has never been great at twitch based shooters, I’ve been waiting to get my hands on it for quite some time, and I finally got my chance this week.

Superhot is a game that, in order to play effectively, you need to play cautiously and methodically. Because the action only moves at any noticeable pace while you’re moving, the game is designed to be played in tiny increments. Assess the scene, move toward an empty spot, take another look for dangers, adjust accordingly. You have ample time to play this like a turn-based game, plotting your moves out with little risk to doing so. You then jump into action, moving at the same time as your enemies. It’s a careful dance where you and your enemies have more than enough time to plan every move cautiously, but get to move at the same time. 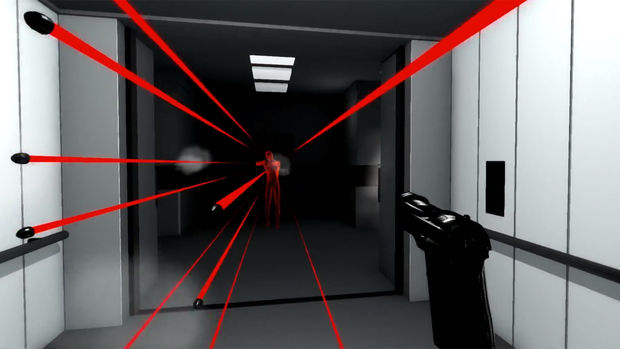 As someone who sucks at first-person shooters due to their twitch reaction nature, this focus on a slower, almost puzzle-based approach to combat really suited me. I got to feel like the potential to be a badass gun-wielding VR murderer was truly within me. One of the aspects of the game I had managed to stay completely oblivious to before playing Superhot was the narrative and plot presentation.

Everything is presented to you as being part of a hacked video game that seems to be taking over people’s minds and devouring some innate part of them. The creepy glitch aesthetic of the presentation, alongside the slow build of a maddening descent into complicity really gave a creepy weight to the gameplay systems at hand. I was in control of the gameplay, but I was certainly not in control of the plot. That juxtaposition was really interesting and something I had no idea Superhot was planning to throw at me.

My biggest take away from finally getting my hands on Superhot was simply that it seems to be living up to the potential that it’s early, eye-catching trailers promised. The gameplay system is polished, level design is tightly refined and the narrative presentation around that core is intriguing and uniquely presented. Superhot looked cool in trailers, and the chunk of time I’ve spent with it reassures me that this is going to be something special when it launches.