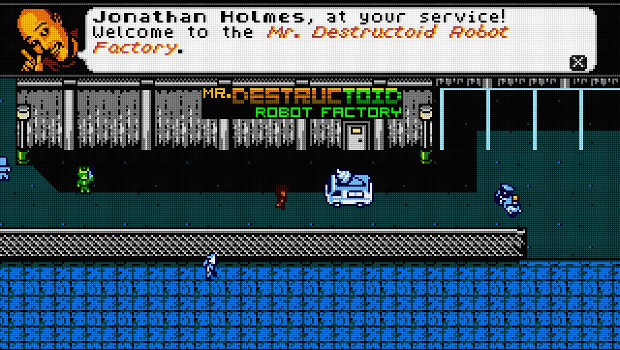 First, the sad news– Sunday’s episode with Chris Seavor was the final Sup, Holmes? on Dtoid’s Twitch/YouTube channel. The glad news? We launched a Kickstarter for the show yesterday, and due to overwhelming support, we were fully funded in less than 12 hours. Holy smokes.

We’ve still got to work out the details of the stretch goals, so chime in if you have ideas for things you’d like to see. A new animated intro, a Sup, Holmes? album featuring your favorite game music artists, a Sup, Holmes? Game Jam with your favorite developers, and a dedicated website (complete with an advice column) are just a few of the ideas we’re hoping to put together. If you’re a developer or musical artist and you’d like to get involved in any of that, let us know.

In the meantime, Brian Provinciano of VBlank Entertainment has offered to donate a Steam code for Retro City Rampage to everyone who backs at the $15 tier and higher. Brian was a part of the show from the very start, so it’s fitting to have him be an integral part of its reboot. You can bet your butts that we’ll have him on the show again as soon as he’s got a new game to talk about. Speaking of which, past and future reruns of the show will appear on this Youtube channel going forward, so re-calibrate your subscriptions accordingly.

Thanks again to Dtoid for helping to create the show, giving it a home for the past two years, and to all the people who’ve backed us so far. We’re going to do our best to give you your money’s worth.