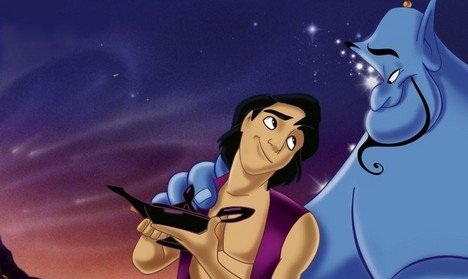 As most of you I’m sure know by now, last night’s Epileptic Gaming was pretty much off the hook. But besides our drunken tirades, one of the big things we talked about was our top 10 lists that we each created that harped on games/gaming franchises that should be brought back to next-gen consoles. I wanted to not only share with you my “script” for the show, but also wanted to hear what all my hardcore Dtoid faithful thought on the subject.

What games/gaming franchises would you like to see reborn?

In other Summa media news, check out my latest appearance on Podtacular. 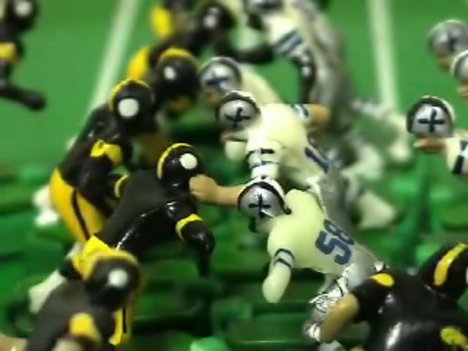 As a young VERY heterosexual child, I absolutely loved plugging in my electric football and trying to move that tiny foam ball down the field. I’d set up plays, scenarios, everything else a non-nerd in training would do. Hear that! I’m cooler than all of you…. EVER! Anyway, back on track. Electric football is f**king awesome. Why don’t they make it anymore? Or do they? Hell, I’d even bite on a video game version of electric football. Come on EA, I know you can do it!! 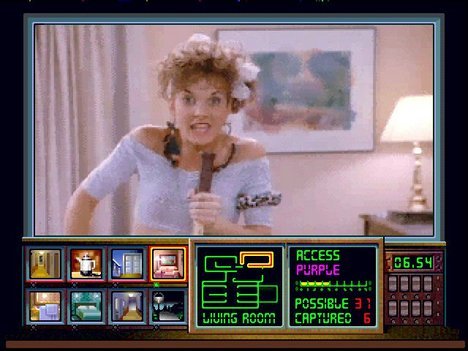 Again, as a young rapist in training, Night Trap was the perfect escape. I loved the idea of chasing after a buxom blonde while trying to do whatever is you had to do in that game. Come to think of it, what the hell were you trying to do in that game. All I remember is that parents hated and therefore I loved it. 2 Live Crew for the win, ya’ll. Anyway, MAKE MORE RAPE SIMULATORS!!! 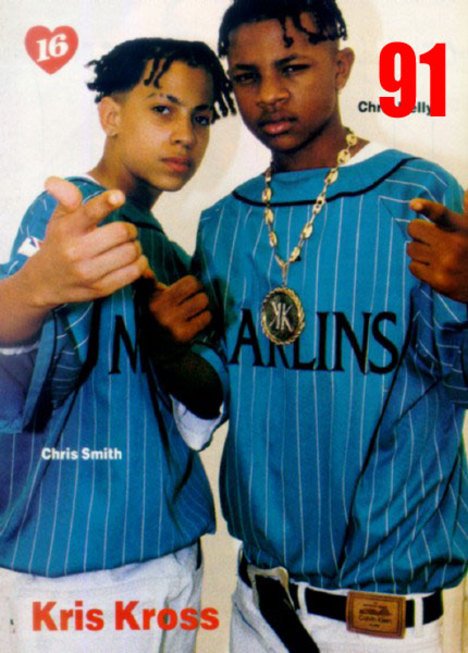 For whatever reason, as a snot nosed brat, I loved this concept and “game.” Maybe it was because I walked around trying to be like Kris Kross as a young wannabe wearing my clothes backwards like an a**hole, or maybe it was because I loved the idea of making my own music video with these songs. Who knows? What I do know is that they need to make more of this shit. Hell, who wouldn’t love to make their own Justin Timberlake “Sexyback” video. I know I would. Mmmmm, Timberlake.

Was I the only person that liked this game? Damn, it feels like it sometimes. Whenever people mention past games they really liked, noone ever mentions Bubble Bobble. Why? IT WAS AWESOME! And the co-op was AWESOME! Sure, they’ve made crappy versions since the original, but I want a new, spit-shined version that keeps the same, classic, basic principles. Make it work people. 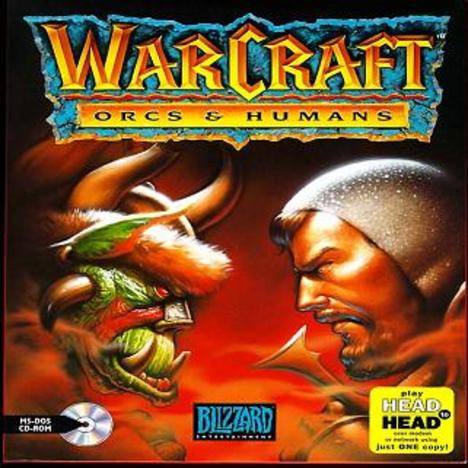 Stop making millions of dollars off of World of WarCraft Blizzard! I want my RTS series back! Sure, they may be working on it right now, but I WANT IT NOW!!! Like, yesterday. But no, Blizz had to go off and dominate the MMO market. F**K YOU BLIZZARD! Us RTS players want our beloved WarCraft back. Please? Pretty please?

As you can tell, I was a total SEGA whore once that Genesis hit. One of my ALL TIME favs was Aladdin. I remember my Mom got me the game after I had appendix surgery. It was my sort of a gift for almost dying. Lucky, for the world, I remained alive and lucky for me I got to play this great game. Thing is, the whole Aladdin genre kinda died since Disney didn’t really make any more feature films of the thing. Sure, they had straight-to-video junk, but nothing major. Anyway, whoever did that Aladdin game needs to get back up and make another. EVERYONE LOVED IT! 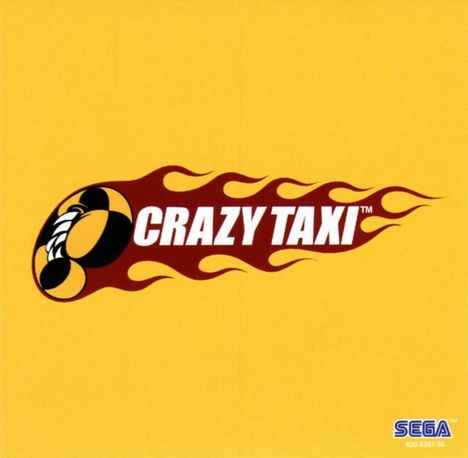 I love love loved the Dreamcast. Not only cause it was the new hotness at the time, but because my buddies and I could burn illegal copies of the games and play for FREE! Well, one of the games I abolutely cherished on that system was Crazy Taxi. Where the fuck are you Crazy Taxi? I know you flirted recently with arcades again, right? Flirted with Xbox? Come back to my next gen. You guys can keep your Full Auto or Burnout or whatever, I want CRAZY TAXI!! 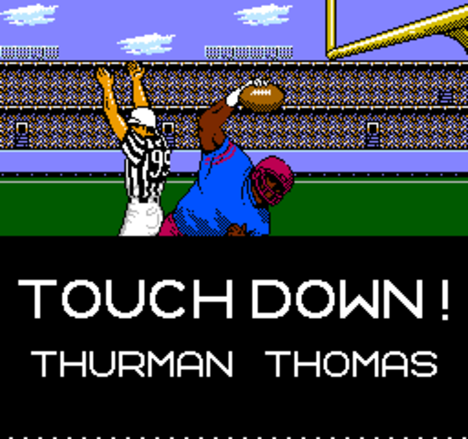 I was a Tecmo Super Bowl freak. My lone friend and I used to play the fuck out of this game. We’d keep our own stats, have our own league, everything. It was truly the golden age for us. Now, while there are plenty of football games out there, frankly, they’ve become too complicated. Why can’t we have a next-gen polished Tecmo Super Bowl with the option to just choose those few simple plays and even present it in the same, flat, sorta 2D style? Who’s with me? Huh, huh? 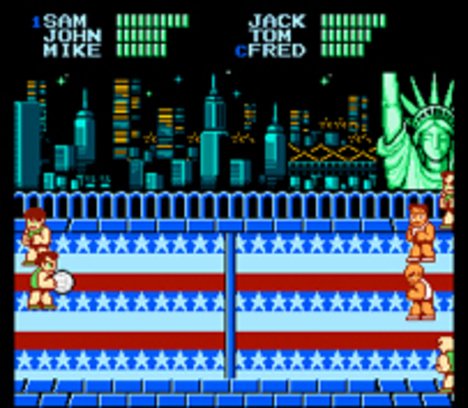 Again, as a totaly straight and vagina loving young boy, I was all about sports games or games that dealt with a ton of violence. Super Dodge Ball to me was a sort of best of both worlds. But why did it stop at the NES? Why can’t I have my mindless school yard brutality on the 360 or PS3. Or hell, how perfect would the game be on the Wii??? Jesus Christ Nintendo, I swear, if you guys make a dodge ball game for the Wii, I would praise you like the golden calf. 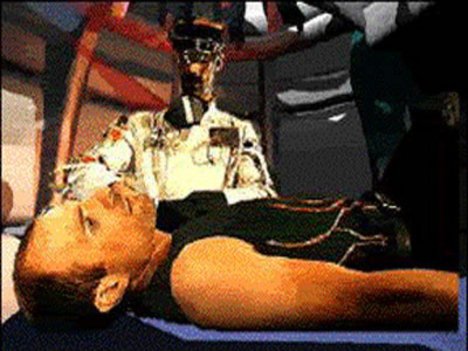 I would be willing to bet that NOBODY that is watching has ever heard of this game. But for me, at my tender age, I didn’t really bother so much with story-driven RPGs that dealt with elfs, orcs or fairies. No, I dealt with big boy issues cause I was a big boy. Burn: Cycle, in case you didn’t know, was THE SH*T! It was abstract, deep (well, deep for a kid), and f**king cool. I still have the damn game and I’m tempted to put it back in. I want a sequel. I don’t care if nobody bought the original. I want my cinematic surrealness again.

Here’s the description via Wikipedia:

The game’s star, Sol Cutter, is a small-time data thief whose latest steal at the beginning of the game comes with a nasty sting. The Burn: Cycle virus has been implanted in his head and has given him a two-hour realtime deadline to find a cure before his brain deteriorates completely. You, as the player, must guide Sol out of Softech and into the Televerse in order to find his cure. Various obstacles and games stand in his way, and there is the overarching realisation that Burn:Cycle has been planted by someone with malicious intent. Finding this within the time limit completes the game.