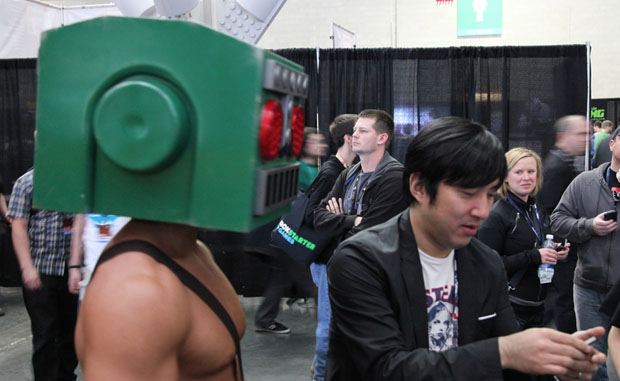 The weirdest thing happened yesterday. Suda 51, creator of No More Heroes, Lollipop Chainsaw, Killer 7, Shadows of the Damned, and many other strange and wonderful games called me up and said “Hey, let’s pretend we’re back at PAX East 2012 talking about how excited we are for the launch of Lollipop Chainsaw!”. I was like “Cool dawg, lets videotape it and ask Sir Tobbii to edit it for us!” He was over my house five minutes later, happier than a little girl (and it showed).

Every time I get to talk to Suda 51, I get angry at myself afterwards for not asking him more questions. I really wanted to know why he chose a cheerleader as the protagonist for Lollipop Chainsaw, why he made Nick just a decapitated head, and why he chose to set the game during a hilarious zombie apocalypse. Sadly, I bet he wouldn’t have told me much about any of that, as it wouldn’t have been too wise to give that much away pre-launch. Now that the game is out, maybe I’ll have better opportunity to pick his brain about the deeper meanings behind the game.

I did get to ask him about No More Heroes 3 though. “Not yet” he said. Understandable, as he still has Black Knight Sword and Killer is Dead to finish. After that though, you’d better whip out that beam katana, Suda. Your fans are waiting.