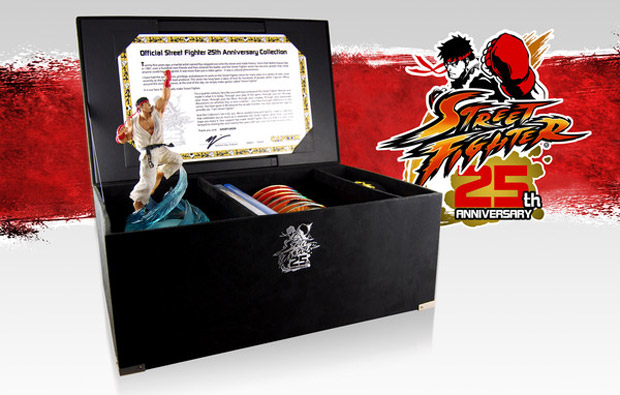 For Street Fighter‘s 25th anniversary, Capcom is going to put out a sizable collector’s set that includes multiple games, movies, music, and more. The package, which will be available for PlayStation 3 and Xbox 360 for $149.99, is due out on September 18, 2012.

The full list of goodies can be found below, but I feel compelled to point out that this comes with Ryu’s belt. I didn’t know I needed such a thing until now, but I really, really do.

Capcom has also revealed the tentative schedule for its 25th anniversary global tournament series that’s taking place throughout the rest of this year. $500,000 and plenty of other non-cash prizes are up for grabs, so you know they mean business.

Revealed today, the list below includes the most current dates and locations (subject to change) for the Street Fighter 25th Anniversary global tournament series:

Adding an extra level of white-knuckled excitement to the competition, the first-place Street Fighter X Tekken player will be crowned champion and be handed the keys to an all-new custom designed Scion FR-S Sports Coupe. Capcom has partnered with Scion, Five Axis and Sony Computer Entertainment America (SCEA), to create a one-of-a-kind Street Fighter-themed sports car, complete with video entertainment hardware from SCEA and a modified exterior from Five Axis including a custom FIVE:AD aero kit, spoiler, wheels, as well as many more premiere components from leading automotive aftermarket companies.