You are about to become what all men should fear

EVE Online is one of those games that people on gaming sites are always talking about, but comparatively few people play it.

This crazy sandbox is filled with tales of pirates, thieves, griefing, and war. It has an insanely steep learning curve and it can sometimes take years to get a character that can pilot the high-level ships. The tutorials are lacking a lot of detail, and the developer’s response is essentially “Here’s a Rubik’s Cube, now go f**k yourself.”

In the not-too-distant future

EVE Online is an open-ended massively-multiplayer online game. Players take on the role of capsuleers, pilots that control the fate of New Eden. You see, 5,000 years from now, the people of earth traveled through a wormhole in space and they founded a colony on the other side. This place was called New Eden, and the wormhole was called Eve. The mega-corporations of the future began to expand to harvest the vast resources of this celestial new frontier. Mankind had a new beginning, and things were looking up. Then the wormhole collapsed. All of these people in New Eden were on their own; there were no more ties to Earth, or the other colonized worlds on the other side. A dark age began that lasted for 8,000 years.

Out of this dark age, five empires emerged and began to rebuild civilization. Of course, they pretty much all fought each other and things were terrible for another 7,000 years. Then they got together to try to get things sorted, establishing how trade would be done across New Eden and setting the stage for EVE Online. There is a loose peace in place, but hostilities abound. 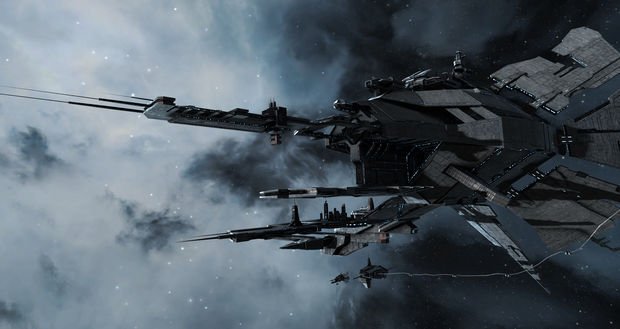 I really started playing EVE back in 2010. Before that, I had tried the free trial at least five times. It’s not an easy game to get into. While there is now a basic tutorial that can point you in the right direction, as of a few years ago, you had to essentially figure it all out on your own.

My first mistake was trying to play it like a regular MMO. It’s not. I looked for quests and I wanted to to level up my character. There are missions, which are quest-like, but there aren’t any levels or experience points to earn. I quickly grew more and more confused and I walked away. But something inside me made me want to come back. There is a freedom in EVE that other games simply don’t have. I wanted to just be a part of an online world — I didn’t want to merely level up and run raids for better loot. I wanted to control the economy and impact the game world. 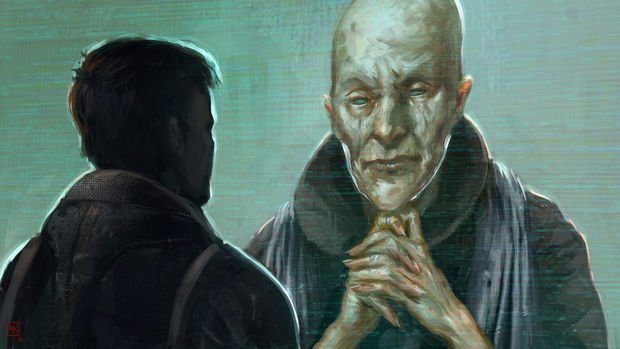 You are the game world

That’s what makes EVE awesome. You aren’t just a part of the game world. You are the game world. That ship you’re flying was more than likely made by another player. The bullets you fire were made by someone. The people around you are all real. The market is driven by people mining, manufacturing, hauling across space, salvaging wrecks, or stealing from other players. There aren’t NPCs handing out epic flying mounts to every person who puts in the time. You’ve got to earn everything in your possession.

Let me walk you through a day in the life of a miner, since that’s what I personally do. I head out to an asteroid field and scan it for ore around me. Then I lock on to the most valuable ores around to start mining. Once my ore hold starts to fill up, I jettison the ore out into space. This system of tossing ore out into space is known as “jet canning,” because the ore sits in a jettisoned container.

Of course, the downside to this is that anyone can walk up and steal your ore. Back when I first started doing this, I had a guy follow me around while I mined and he would just steal my ore. He had a frigate so he couldn’t take a lot, but he told me he did it just to annoy me. He had nothing better to do than annoy a lone miner. I wasn’t bothering him, I was just minding my own business, but he wanted to interrupt my day.

There are actually a lot of people who enjoy griefing in EVE. Sure, there are people like this in every game, but it’s a way of life in EVE. Entire corporations exist just to mess with the powerful and wealthy. You can prove this by heading to any ice field in the game. Players can mine these giant chunks of ice and make a decent profit. Not as much as if you were mining ore, but the upside is that you really don’t have to do anything to mine ice. You press a couple of buttons once an hour, which is great if you want to play and not be glued to the keyboard.

Some people don’t like that other people can make money while not actually playing, so they fly into these asteroid fields and “bump” ice miners away from the asteroids causing their mining operations to stop. Bumping a player is just as simple as flying your ship into theirs. There is no penalty for it, so you can’t do anything about it. They just feel it’s not fair for you to make money this easily, so they give you a challenge. 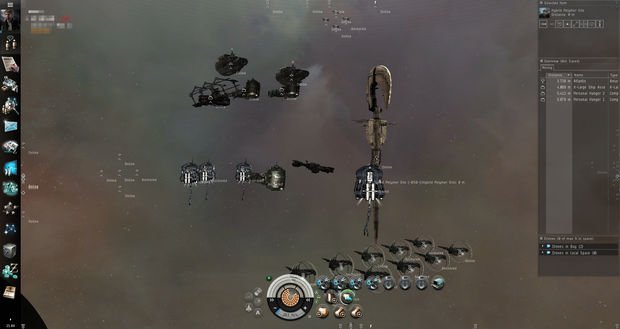 It takes all kinds

That’s just one example of how things can go in New Eden. Every play style can find something to do in EVE. If you love PvE, PvP, solo play, hanging out with friends, if you’re casual, or if you’re hardcore, you’ll find a home. Of course, the crazy PvP stories are the ones that people talk about the most, but there are tons of other things going in behind the scenes. Miners mine, people haul freight across space, and stations manufacture ships and weapons.

Space is a big place. It can take hours to fly from one system to another. There is no fast travel system, so if you want to go somewhere in the game, you have to fly there one jump at a time. If you buy something that’s 10 jumps away, you’ll have to go get it and bring it back. This makes for an amazing regional economy system. Something can be priced drastically different if you go to the other side of the map. To make it even better, some resources are only available in certain regions. People have to harvest the materials, manufacture the goods, and then figure out how to distribute the merchandise to the places where people are likely to buy it. It’s a real, working economy.

As you might have heard, EVE is a hardcore game for sure, and a lot of gamer’s don’t have the patience to spend years learning how to play something. The general theory of game making today caters around instant gratification. When you press a button, something awesome happens. If you play an MMO and you don’t level up in a session or get some awesome new loot, you feel like you didn’t accomplish anything.

While I don’t think that’s a bad thing for most games, EVE offers something different. EVE rewards the patient. Skills train up in real time. Early on, this means waiting 15 minutes to fly a better frigate, but as the game progresses it can take days or weeks to pilot a new ship. When I finished my 50 days of training to fly a Hulk (EVE’s largest mining barge) it was the most amazing feeling of accomplishment. 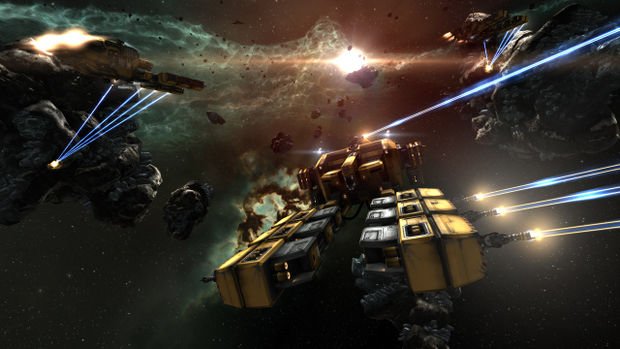 So why play EVE?

It’s definitely not an easy game to get into. I’ve been around for a while, and I am still learning new things constantly. There is a lot going on in EVE to the point where it’s virtually impossible to master everything. You have to pick a few things and try them out. Some people want to get a crap load of money and run a mega-corporation, while others want to have badass space ships that can blow up anything. You have freedom to choose what you want to do. There is no end-game, there is no winning, and there is no losing. It’s about accomplishing what you want to do. Nothing is more satisfying then achieving a goal you have been working towards for months, or maybe years.

I play EVE because it’s an engaging simulation of space that’s populated with real people. Artificial intelligence can only go so far in mimicking human responses. All the pilots, corporations, alliances, battles, wars, ganking, and pirating are controlled by real human beings. If there was a crazy dystopian future that was like the wild-west in space, it would probably look a lot like New Eden. No computer will ever declare war “for the lulz.” It’s the crazy people that make EVE fun. Sure, I don’t like it when someone ganks me, but it makes the game much more fun when there is always an impending sense of doom floating over your head. Anything can happen, no matter how safe you play.

EVE’s future is looking bright with constant updates, and the new addition of DUST 514 to the EVE universe will bring even more players into the fold. It has been around for a long time and doesn’t look like it’s going anywhere anytime soon. So long as its servers are up and running, there will be a dedicated group of pilots, myself included, that will keep flying.