Earlier this afternoon, Gwinett Technical College’s George Busbee International Center for Workforce Development was transformed. Perhaps if Busbee — a former Georgia senator — were alive today, he would beam with pride as eager wrestling filed into one of the building’s medium sized rooms, many of them carrying their own steel folding chairs.

The occasion was the “TNA Bound for Glory Fan Interaction” event, a chance to meet their favorite wrestling personalities (and get your steel chair autographed), chat with fellow fanatics, and purchase TNA merchandise. But more importantly, today was their chance to get the first glimpse at Midway’s upcoming wrestling title, TNA Impact!.

TNA president Dixie Carter took the stage, and at the mere mention of the game’s title, a fan hollered from the crowd: “Best wrestling game ever!”

And this was before we had even been shown a single second of footage. 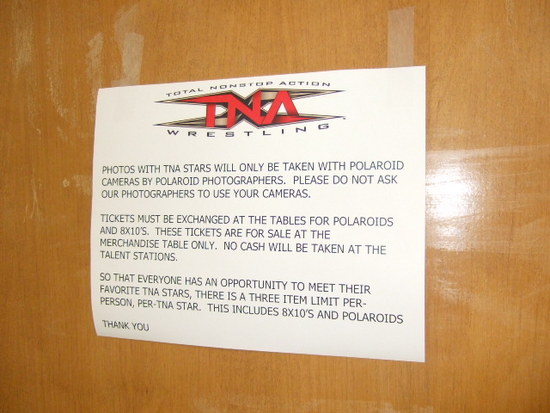 As if the steel chairs, duffel bags full of action figures, and homemade iron-on t-shirts weren’t enough to tip you off, it should be noted that TNA fans are a passionate bunch. While the crowd in attendance for the fan interaction event was small, the enthusiasm was frighteningly large. We’re talking about fans who will wait in line for an hour just to get a poloroid photo taken of them with a wrestler named Black Reign, and his pet rat, Misty.

The title was revealed in the form of a short trailer, which showed off the game’s impressive Unreal Engine 3-powered visuals. Par for the course, the trailer featured shirtless men pounding one another into the mat inside the ropes of the federations trademark six-sided ring. The crowd cheered as their favorite wrestlers’ entrances were displayed, with all of the flair and pomp of the show’s televised events. 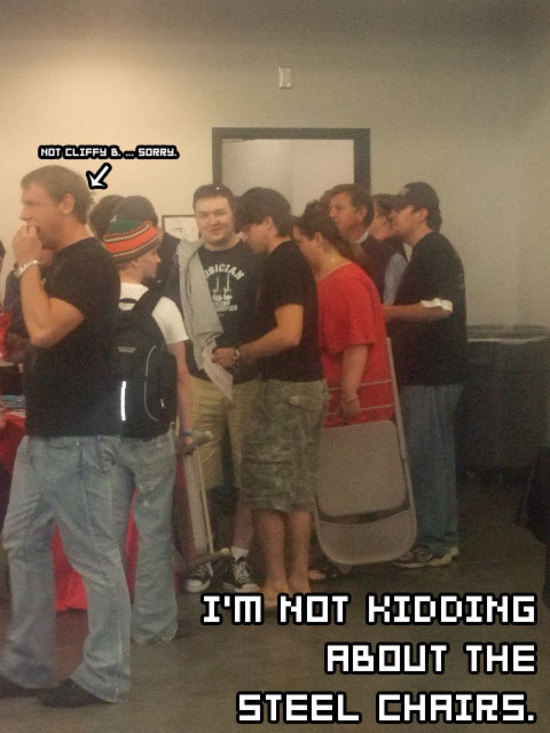 Fan favorites Samoa Joe and Christian Cage then hit the stage, standing face-to-face to engage in a little smack talk while monitors displayed a TNA Impact! simulated match-up. After an AI-controlled Christian put up little to no fight (“They only gave me one move in the game,” he complained. “I have at least four!”), the digital Samoa Joe emerged victorious. The crowd went wild, and while distracted, I attempted to snap pictures of unfortunate outfits and jaw lines. I’m slippery. 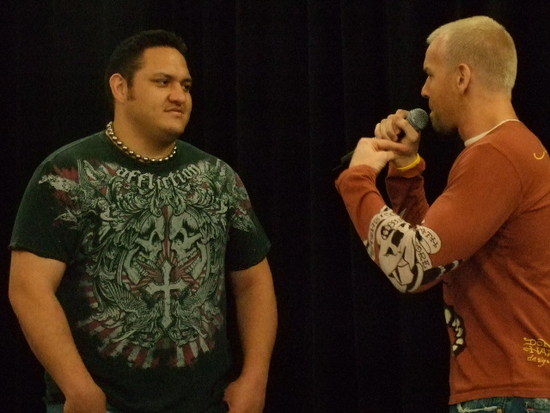 The in-game action looked to be fast-paced, arcade-style action, revealing a significant difference between it and titles like THQ’s WWE Smackdown vs. Raw. And that’s to be expected — the game’s lead producers, Sal DiVita and Mark Turmell, are Midway veterans, responsible for such over-the-top titles like NFL Blitz, NBA Jam, and WWF Wrestlemania: The Arcade Game.

Later this evening, I’ll have a chance to get some hands-on time with the next-gen version of TNA Impact!; the game will be coming to the PlayStation 3, Xbox 360, Wii, and PlayStation 2 in Spring 2008. Likely, this will be the only opportunity I’ll ever get to pin Samoa Joe for the three-count. After seeing Kevin Federline’s baby’s momma, Shar Jackson, in a restaurant today, that’ll make two dreams realized during the course of 24 hours. I love Atlanta.

Look out for a detailed Destructoid “Pew! Pew! Preview” and impressions soon.