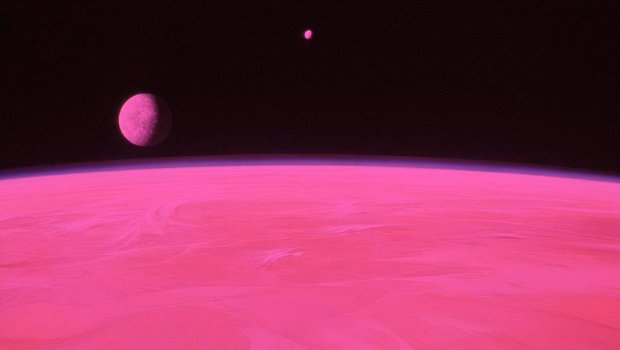 Peril of the Pink Planet

BioWare wants to take you to a gay bar. Or rather, a gay planet. Star Wars: The Old Republic is being updated to include a rather inelegant solution to its lack of gay characters — a planet called Makeb where all the homosexual elements of the galaxy can be found.

Makeb will appear in the Rise of the Hutt Cartel expansion pack, and will include characters with “flirtatious” dialog for same-sex players — a move that some feel amounts to digital segregation.

This attempt at compromise has had the unfortunate result of making everybody unhappy. Gay players now feel like a gated afterthought, while homophobes are spewing their pathetically predictable outrage at having to share the vastness of space with some gay people.

“It will ruin the game and make a lot of people leave it,” reads one such utterly selfish comment.

While BioWare’s catching a lot of heat from all corners, and the idea of a single planet housing all the gay elements of the universe comes across as alienating and just plain weird, I find it hard to be totally mad at the studio here.

It’s true that Makeb makes the idea of gay relationships look more of an afterthought than ever, but most other videogames still struggle with after-afterthoughts, and you’d be hard pressed to find many other mainstream studios with a more consistent track record of not being shit about acknowledging homosexuality. Not to mention, the source material wasn’t exactly a guiding light on the topic, so BioWare’s been bolder than most others have been.

Makeb itself is something of a stop-gap while BioWare works on companion characters with which to enjoy “same gender relationships,” something executive producer Jeff Hickman admitted would take more work than expected.

“I realize that we promised SGR to you guys and that many of you believed that this would be with a companion character,” he wrote. “Unfortunately, this will take a lot more work than we realized at the time and it (like some other pieces of content we talked about earlier in the year) has been delayed as we focused on the changes required to take the game Free-to-Play. As we have said in the past, allowing same gender romance is something we are very supportive of.”

Of course, there’s a fair argument to be had in saying it’s better to wait for a real effort than toss out what amounts to a virtual paddock area. The creation of Makeb, while likely infused with nothing but good intentions, has nonetheless come off as rather tasteless. I mean, if you imagined a planet that housed all the women, or all members of a certain nationality, even those with limited empathetic ability should be able to see the issue.

BioWare’s intentions and past record doesn’t make the situation cool in any way, but in a world of entertainment where “person is gay” is still considered both a joke and the punchline to the very same joke, it feels wrong to pour overwhelming scorn on a studio that’s at least trying, in its own awkward way. It shouldn’t be free from criticism, either, but I dare say the reaction could benefit from being a tad more tempered.

Quite a knotty issue indeed, and one of those instances where, while I can understand where BioWare’s coming from, I can’t help feeling this is a situation it could’ve afforded to wait on until it got it right.

Oh, and to the homophobes — I hope you find yourself one day sucking on the biggest penis ever, belonging to a guy dressed up like one of the Cantina band. And you love it. And you …