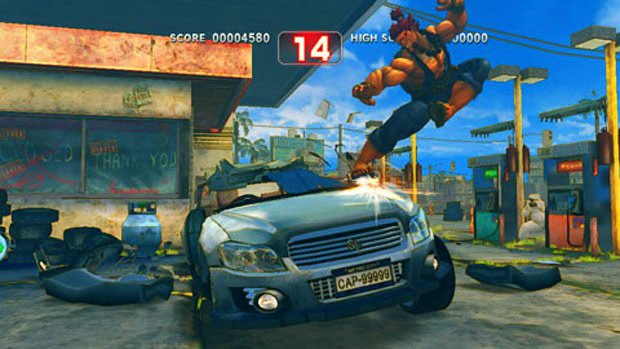 Capcom’s official Super Street Fighter IV website has just been updated today, and it was a relatively big one. First off, the character page now details Chun-Li, Crimson Viper and Cammy, with character profile pages and imagery in the new pencil art style.

But you’ve already seen these ladies before. You want to know about all the other updates, like bonus stages and the hot new multiplayer features, right? Hit the jump and we’ll get to it.

The first big update is the site’s official page featuring the return of bonus stages, with plenty of screenshots and info. The page details how the car destroying stage should be played, (start with the door, then go for the roof) and even features some tips on how to rack up more points. Destroying as much of the car as possible within the time limit is obviously the point, and finishing the job before the clock runs out rewards you with a “perfect” rating. However, the game lets you continue to improve even further by turning it into more of a time attack challenge once you’ve already figured out how to effectively pulverize the vehicle.

The other bonus stage is, of course, the barrel-breaking game. Unfortunately, my Japanese isn’t quite good enough to tell you as much about this one, but it does say that earning a perfect rating will be much more difficult in this stage due to the almost endless supply of stuff to beat up on. It also says you’ll be able to use your super combos here to do extra big damage. If you can moonspeak better than I can, feel free to help out in the comments.

Finally, an update on the new Network system. Spectator lobbies are confirmed, and the page says up to NINE people can share a room, with eight players fighting and one person to act as a tournament organizer. This should make for some truly epic home tournaments. All players involved can spectate, and can communicate with the entire party via voice chat, which should be great news for those of you playing the PS3 version.

Optional team matches are either 2-on-2, 3-on-3 4-on-4, with the next player in line taking on the winner of the previous bout, and will let you select your character before each match. The whole thing works in an endless tournament mode, allowing you to rack up wins and play for as long as you like.

There’s also a replay channel, which lets you study past matches. You can store the replays on your hard drive, add your own ratings to each one, and even view them with the other people in your player lobby to discuss techniques or rub your victory in each other’s faces.

I have to admit, I was initially pretty excited for the bonus stages, but if things shape up the way they’re looking so far, I think this new lobby system and the awesome tournament-friendly multiplayer system is going to be the big draw of SSFIV. That is, aside from the new characters and balancing tweaks.

On that note, Event Hubs has some info detailing a JeuxVideo.fr interview with Yoshinori Ono, in which he spills a few beans regarding the game’s development. From that post:

Lots of new info to take in, and some pretty exciting stuff for Street Fighter fans. We’ll keep you posted as more of this is made English-friendly and rolls in over the next few days. In the meantime, there’s also a new trailer on the official site that will apparently show off the new modes. It doesn’t seem to be working just yet, but might be something to keep an eye out for.

UPDATE: Trailer is working now. Take a look and notice the new round marker and KO screens, and listen for the new announcer relaying it all. [Thanks RAB]