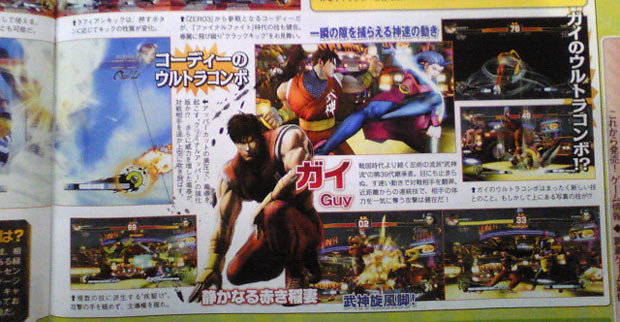 As Nakky promised over on the official Super Street Fighter IV dev blog last week, the new issue of Famitsu carries within it some hot new character reveals for SSFIV. Officially joining the roster this Spring will be Adon, Cody and Guy from the Street Fighter Alpha series.

Looks like Adon’s foot was probably the source of Chun-Li’s pain in that Focus Attack screenshot we saw last week, and the new stage was Cody’s. This being a leaked scan spotted over at Shoryuken, Capcom still has yet to release any official information on these characters. But a look at the scans gives us a taste of what kind of action they’ll be bringing back to the game.

Perhaps when they get to talking, they can tell us why Cody is still wearing his prison clothes and shackles after all this time.

And if our SFIII fans out there are feeling let down, don’t. Take a look at the gallery below and you’ll see that the cropped shot of Guy’s punch is blocking a kunai. Furthermore, the text above that image in the magazine pulls the Chun-Li teaser stunt from last week and asks whose it might be.

Hmm, kunai … I don’t want to speculate, but I’m going to guess her name definitely rhymes with Ibuki.