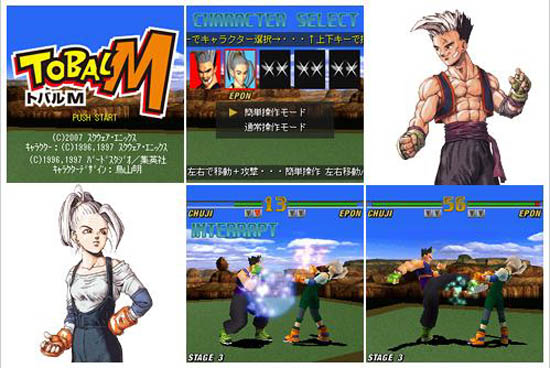 Even more TGS lineup listings are coming out of Japan as we’re now only 20 days away from the event. Japanese giant Square Enix now lays out the list of their wares, and it shows that some classic Square franchises are making a comeback.

The listing Tobal M (pictured above) is an eyebrow raiser… until you find out that it’s a mobile game. Actually, half of their listed playable titles are Mobile only. We can appreciate that the mobile gaming market is growing in Japan, but they have to understand that non-Japanese gamers are going to be a bit bummed.

While we’re still taking disappointments, we have to mention that mega-titles like Last Remnant, Dragon Quest IX, and Fabula Nova Crystallis Final Fantasy XIII will only be shown in video form. At least this is playable. Hell, if it wasn’t for the obligatory surprise announcements, Square Enix’s TGS booth might even be a “pass.”

Yeah, I don’t really mean that. In fact, while digging around in Square Enix’s TGS page (complete with annoying mock show floor noise), I found that line-waiting booth attendees should be able to nab the “Square Enix Music Sampler Vol. 2,” which is grade-A swag to a geek like myself. They will have Music CDs and DVDs on sale as well. How did you miss that, IGN?

Hit the jump for a list of titles from Square Enix.