[Every now and then, Dtoid shines its Spotlight on a games-related artist, event, or place we’d like to share with you guys. Basically, we think this is awesome. Do you think it’s awesome?]

A long time ago, I turned to TV for shows centered around games. They were awful. Somehow, they are even worse now. Thankfully, YouTube came about. Among all the crappy videos of kids recording themselves playing Halo with busted webcams and budget mics, a couple entertaining voices were born. Over the past year, none has shinned brighter than The Game Chasers.

The Game Chasers, Shady Jay and Billy Hudson, are upfront about what they do: They take the American Pickers format and apply it to videogame bargain hunting. While anyone can roll with this concept, it’s the slick production and lovable personalities on display that make this show a winner. It’s a show for old school gamers by old school gamers and it’s a mega-f*ckton better than anything G4 ever put out. Seriously.

The Game Chasers are 15 episodes deep now. While you can start from the beginning — and this series starts off very strong — If I have to pick an episode, the PAX 2011 episode would be my favorite. Jay and Billy are already two outrageous guys, but seeing them interact with fellow YouTube gaming personalities, including Pat the Punk, really sets this one over the edge. 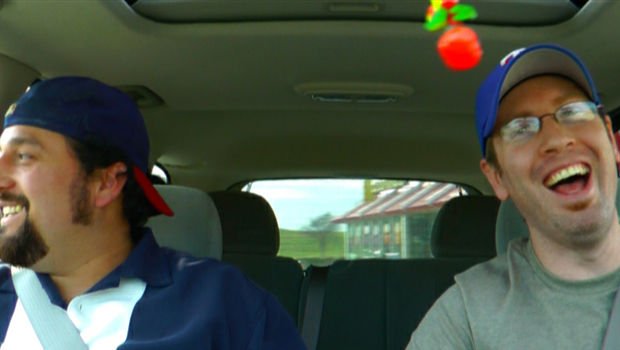 Over Skype, I got to sit down with Billy and Jay to talk about their life outside game chasing, how they got started, and why filthy flea markets are a necessary evil in the life of a game chaser.

Where are you guys based?

Shady Jay: Dallas/Fort Worth area. Billy lives in Fort Worth. I actually live in Arlington.

How long have you guys been game chasing?

B: Oh yeah, I got a video I’m working on right now.

Are you going to buy Jay a ring?

B: [laughs] Yeah, I got him a nice full bottle of jackshit!

What are your day jobs? Do your co-workers know about the show?

J: Yeah, and yes. I do. Not all of them know, just a handful. I work with mainly women so they probably wouldn’t care.

Jay, do you work at a strip club?

J: [laughs] Yeah, I work at Babydolls in Dallas. Ahh, no. I work for a non-profit organization.

B: I mainly do freelance stuff. I don’t have an actual quote-unquote job. What are these actual jobs you people are talking about? I do whatever brings in money: graphic art, video work, rap videos.

B: I’ve been doing this for about 12 years now. Been working at TV stations, Spanish television stations, even though I couldn’t speak Spanish. 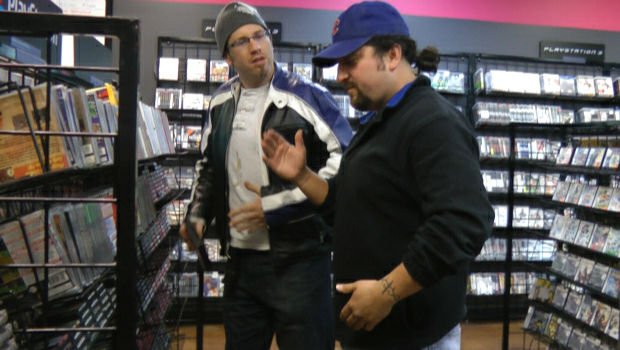 I can tell you’ve been doing this for a while because the quality of the videos are so good.

B: Yeah, well. It’s one of those things where I know a lot of tricks to make it look high budget when it’s really not.

J: Yeah, no doubt about that!

B: We don’t do anything fancy. These are just tricks that are sleight-of-hand.

J: Our budget is so big we can have a green screen at his apartment and at mine!

You ever have times when you find something good but don’t have the cameras rolling?

J: We went to a state sale last weekend; we had no cameraman, so I just busted out the iPhone and got a couple Odyssey games.

B: I went to a flea market about a month ago and found some really sought after games. I got Soul Blazer in the box and Lufia as well. The reason we didn’t have a camera man … wasn’t that the time he went to a museum? The Washington museum?

B: Some museum in Fort Worth to look at facts about George Washington. Even though we were just in Washington, D.C.! [for Magfest]

J: Like Billy said, this is something we’ve been doing together for six or seven years and then a year ago we just decided to record it. We’re always looking for games, whether we are together or apart. Whatever. 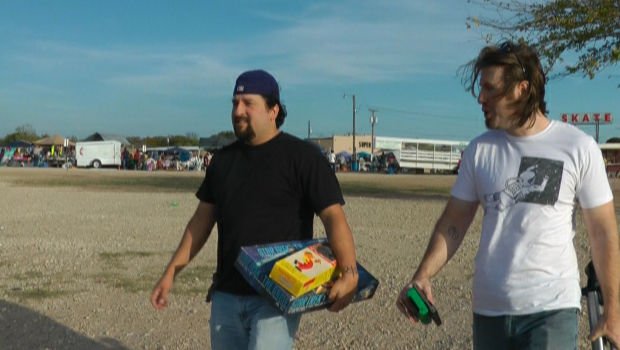 Does having a camera on you make haggling easier or harder?

B: Harder. Well it depends, especially if we go to a flea market where people don’t speak English. When somebody doesn’t speak English, it’s hard to convey what we are doing and why we have a camera in their face. A lot of them don’t want anything to do with us —

J: Some call security. [laughs] We think security was called but we burnt out before we knew for sure. Another time security came up to us and were like, “Hey! Stop filming! You’re on private property.”

B: Hey, if they don’t want free advertising …

What’s the furthest you’ve gone for a game. Whether it be distance, price, or personal humiliation?

B: It has to justify the gas, I’ll say that much. If you are spending more on gas then the game is worth, it kind of negates the deal. The furthest I’ve gone is maybe Denton, Texas. It’s not very far at all. I can’t think of any instances where I wanted a game so bad that I’d drive that far to get them.

J: I bought a lot off Craigslist. This was years before I started the show. It might have been 60 minutes away. I don’t remember the name of the town.

J: The funny thing about that is now that we’ve gone to further places in Texas, I want to go more. We can stay in a four hour radius from here, Houston, Oklahoma city, Austin, and get back home in a day if we wanted to. It wouldn’t be too bad on gas, but we want to go to as many places and as far out as possible.

In your recent MAGFest episode, you guys hit a dry spell when you went game chasing outside of Texas. Do you chalk it up to bad luck or is Texas just that much better for game collecting than everywhere else?

J: I heard from fans that their area just sucks. I hear the Philly area and San Diego area are good. A lot of people tell us, “I live in this place, that place, and there is nothing here.” I just think we are really lucky here in Texas.

B: I think that maybe if we went more off the beaten path on our way to MAGFest we may have had better luck, but since we were so close to the highway we weren’t getting the best stuff. You want to go to those small towns 45 minutes away. You need to go outside of civilization to find the good stuff.

J: You need to hit those dirty flea markets. The dirtier the better, in my opinion.