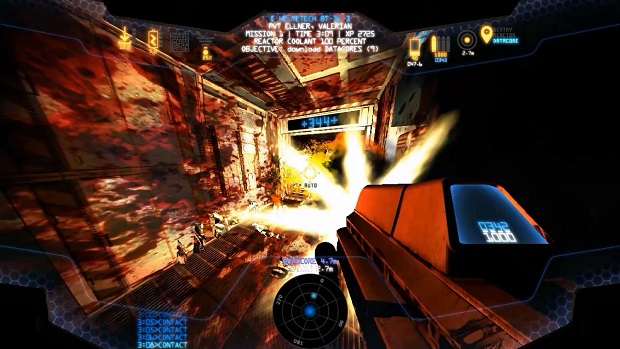 Nornware’s FPS manages to distill the intensity of Aliens

Space Beast Terror Fright is Johannes “johno” Norneby’s interpretation of the sci-fi first-person shooter: take the artful tension-building and high-octane muzzle flash from James Cameron’s Aliens, add in the corridor control and strategy from Games Workshop’s Space Hulk, give it the look and feel of classic FPS games from the ’90s, and then mix all that delicious stuff up with some roguelike randomness and permadeath and you’ll have a pretty good idea of what johno’s got in store for you.

One thing that you should know about Space Beast Terror Fright is that it’s a difficult game. Not smash-your-keyboard hard, but more than challenging enough to keep you on your toes and ensure that you never get too cocky. Norneby discusses the game’s difficulty on the title’s development blog:

“As it stands S.B.T.F. is probably a very, very hard game for most people. This is partly due to the fact that I have been playing it for way too long to be able to tell exactly how hard it is, but also very much because it is intended to be hard.”

The developer references Cameron’s Aliens specifically when he elaborates on S.B.T.F.’s intended difficulty: “I really wanted to try to capture the intensity of that movie and attempt to draw it out as much as possible,” he says, reminding us that “most [of the] characters died in that movie.”

Space Beast Terror Fright feels claustrophobic in all the right ways — intersections split off into passageways that are so similar in appearance that you’ll be relying on your positioning readings to find the next Data Core to download. The darkened hallways keep the mood appropriately tense as you push forward, adding to this effect, your helmet’s visor overlay slightly restricts your field of view (you can remove the helmet view in the settings if you prefer).

Norneby’s approach to the first-person shooter roguelike works incredibly well. The objectives of the game are simple and easy to understand, yet difficult to accomplish. Space Beast Terror Fright inspires that “one-more-run” mentality that I get when playing games like Spelunky or Vertical Drop Heroes HD, but does so in a way that appeals to the old-school FPS lover that I am at heart.

Space Beast Terror Fright is still in development and is currently in the process of seeking Greenlight approval on Steam. If you like what you’ve seen of it so far and would like to support the game, make sure to drop by the title’s Greenlight page and give it your vote.

Norneby has also a packaged a standalone demo for the game for you to try out if you’d like. If you want to keep up to date with the latest build, you’ll need to download the Nornware Launcher, a simple HTTP utility that keeps the different builds available up to date.