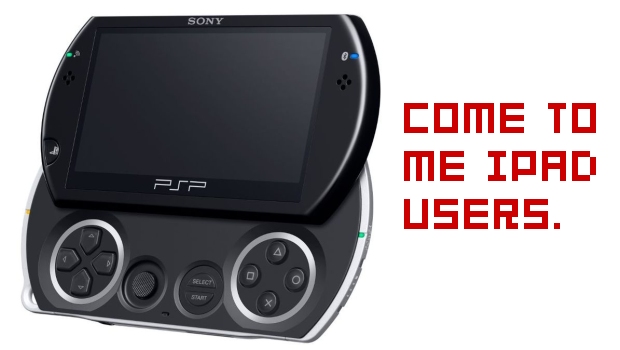 Woooo! I thought by this weekend all the iPad stories would have shriveled up and died in a pile of exhausted Apple fanboyism and Apple hatred. Leave it to Sony to make a lowly weekend editors dreams come true. The company has commented on the iPad’s gaming ability and what it means for Sony.

“Apple’s entrance into the portable gaming space has been a net positive for Sony,” Sony’s John Koller, Director Hardware Marketing, told the Wall Street Journal. “When people want a deeper, richer console, they start playing on a PSP.”

This is like the Wii argument they’ve been putting up for years. When people get bored of the Wii they’ll come to the PS3. Who knows if that is actually true at all, but you’ve gotta give it to Sony for putting a positive spin on almost anything. Not like those Nintendo jerks who have to rain on everyone’s parade.