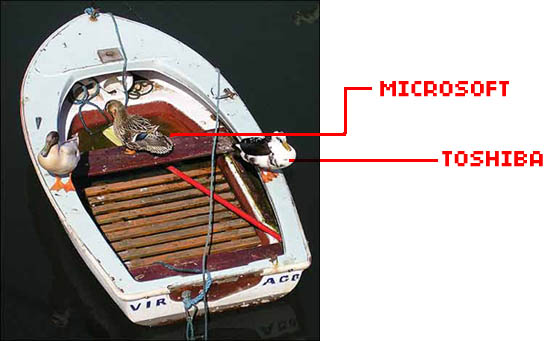 Okay, so there’s no Good Ship Blu-ray, but Sony would love for you to believe that Blu-ray is a massive battleship that dominates the waters, stopping to offer assistance to the little wooden raft called HD DVD. It’s not all that bad, but Sony Pictures VP Don Eklund couldn’t help but throw a little jab. He invited Microsoft and Toshiba to the Blu-ray party in a recent interview, says Next-Gen.

“We would love to have Toshiba and Microsoft on board,” said Eklund. “Toshiba can’t keep dropping prices much more. It may be a strategy for fighting a format war, but for us it has to be profitable.”

Eklund also throws up some defense for the “downloads are the future” attacks:

“People aren’t interested in downloading videos at the moment,” he said. “The internet is a good way of delivering music but not video. Blu-ray has a good 8 to 10 years before the internet catches up.”

Sony, what if HD DVD is more like a submarine, with its torpedoes aimed right at you?