Yep, there’s at least one unlockable

While Sonic Frontiers has a ton of busywork to sift through on each map, you really don’t need to do most of it to actually clear the game.

In fact, it should take most people 12-15 hours to finish Sonic Frontiers if you’re mostly doing critical path content, even with some light exploring. Getting to the end quicker will in turn unlock arcade mode faster. 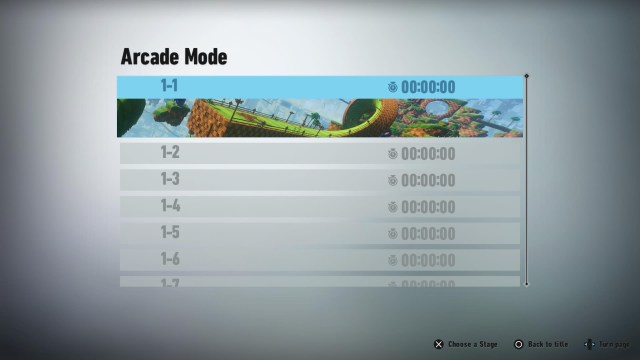 Once you beat the game, you’ll gain access to arcade mode

All you need to do is finish the game by any means (the end of the fifth island) and you’ll be good to go. Once the credits roll, you’ll see the option pop up on the main title screen.

You don’t need to get the true ending to unlock arcade mode: but if you do want to go for it, we have a comprehensive guide here.

So what is arcade mode in Sonic Frontiers?

Arcade mode lets you manually select stages from the core game (Cyber Space levels) from the main menu. You can instantly warp to them anytime you want, even if you haven’t discovered them on the various island maps yet.

As a reminder, these stages are like traditional bite-sized Sonic levels, and range anywhere from a minute to several minutes. If you’re the type of person who’s  keen on going for a time attack top score, or recording “no hit/perfect” runs for YouTube, this is the easiest way to do it.