A lot of it is scripted

Although Knight is technically the third major boss you’ll encounter in Sonic Frontiers, it’s actually one of the easiest to defeat. 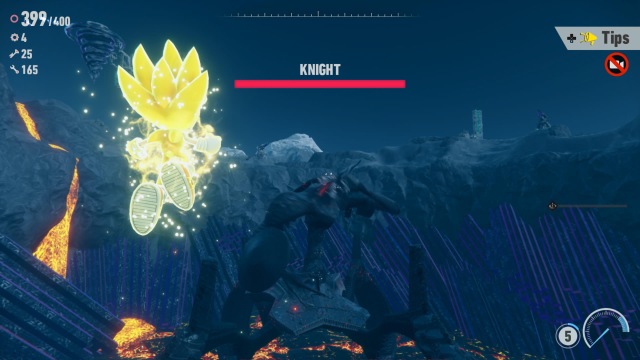 Getting the Chaos Emerald to turn into Super Sonic

Like the rest of the key gigantic bosses, you’ll need to make your way to the top of Knight to actually trigger the Super Sonic transformation and deal damage.

Knight will mostly throw out slow attacks, so have your finger on the R2/RT (dash) button and dodge them manually. After they raise their hand to slam the ground, that’s when your opportunity to strike is about to start.

Wait for them to hit the ground, then run up and slide on the rails. You’ll grind up to their head, and the game will prompt you to pick up the Chaos Emerald. Even without a lot of upgrades, Knight takes a ton of damage, so odds are you won’t be seeing much of this phase at all. Dash in close to Knight and unleash your combos until a cutscene plays.

As part of a scripted sequence, Knight’s chainsaw shield will ready, and a QTE will pop up on the screen. Hit the white circle while it’s inside of the red one, and a scripted scene will play, as Knight tosses missiles your way, attempting to prevent you riding said shield directly into the boss. Just keep a steady hand and move toward Knight: eventually you’ll connect and get through the barrage of missiles.

After connecting, unleash a combo and you may even push Knight to phase two immediately. 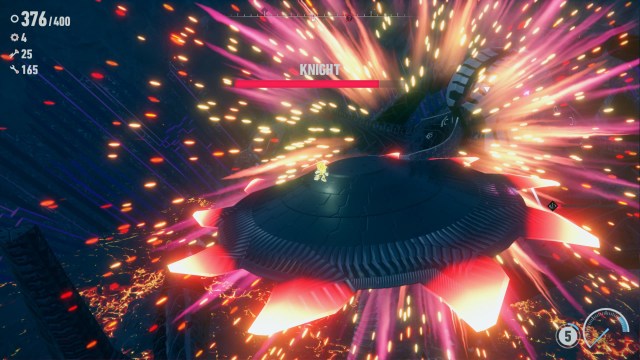 Phase two is really easy: once Knight’s shield starts flying around in the air, take note of the lines that dictate where it’ll be heading next. Cut off the shield and use the parry technique. You’ll take control of the shield once again: aim it, and smash it into Knight with the on-screen prompt (Square/X on Xbox). It’s ideal if you’re close to Knight when you actually parry and aim, so there’s less chance for the boss to dodge. After that, you just need to repeat the same process of smashing out combos in phase one.

Like Wyvern, the final portion of the boss is a QTE. Hit the red/white ring timing, and mash Square/X, and your job is done.