A little bit into Sonic Frontiers (read: around three to five hours, depending on your pacing), you’ll encounter the first big boss of the game: Giganto.

It’s actually right after this puzzle, so be on your guard: and save after that puzzle/before you go into the boss area!

Getting the Chaos Emerald to turn Super Sonic

When walking into the Giganto boss fight, you need to know one major thing right off the bat: you can’t hurt it unless you’re Super Sonic. Good thing the last Chaos Emerald you need for that is on his head!

To get up there, you’ll just sprint on either leg and use the blue rings to rocket up to his arm, then his head. You can do this freely without a timer: just be aware that his head/shoulders do have beams that can hurt you/knock your rings out of you.

You may want to gather some rings in the valley before going Super Sonic first: more on that in a second.

Once you turn into Super Sonic, you’ll kick off the boss fight proper, and Giganto’s health bar will appear.

The main thing you need to know is that Sonic’s life is now tethered to his ring count when you’re Super Sonic. You’ll want to have in the neighborhood of 150-200 rings to have a comfortable lead to take out Giganto, before you run out of health.

To kick things off, boost (R2/RT) into Giganto and start smashing its head with a basic mash attack (square/X on Xbox) combo. When the triangle/circle (Y/B) prompt appears, hit that. When Giganto raises his hands, press L1+R1 (LB+RB) to parry, and create another opening for your combo. That’s about it until you get it to roughly half health, kicking off phase two. 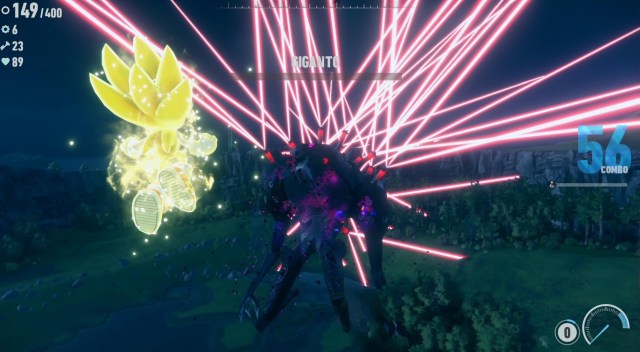 Although a bunch of lights appear around Giganto to make it look more scary, phase two is mostly the same deal. Get close to Giganto, mash your combo, and stay in front of him to avoid his back lasers.

This time though, it’ll shoot a Dragon Ball Z-esque beam at you, which you’ll need to deflect with an on-screen QTE. It’ll ask you to mash square (X), which is easy enough to do and has a very forgiving meter threshold. Rinse and repeat getting close to Giganto and launching off combos, and it’ll be dead in no time. If Giganto raises both his hands to clap down on you, parry that right as the hands are going up.

The main thing you really need to keep in mind is the ring count. With a perfect run, without getting hit and full combo damage, 100~ rings may not be enough to take it out. If you find yourself losing against it over and over with a low ring count, just load up your last save (or the checkpoint), gather at least 200 rings, and try again.