One of the best things about going to conventions like PAX, and covering competitions like Microsoft’s Dream.Build.Play, is that I get the opportunity to play games that I would’ve avoided like the plague otherwise. The occupational hazards of games writing are pretty mild — whereas some people are mangled by sharks or caught in textile mills over the course of their jobs, the worst thing I could say was “I had to play Cadenza Interactive’s Sol Survivor, and I don’t even like turret defense games!”

That doesn’t really cut it.

Thankfully, even if you’re not into turrets, defense, or turret defense, Sol Survivor provides enough of a spin on the genre to make it worth your while.

In Sol Survivor, you play as one of several Sol Paragon generals (each with different weapons and support configurations) trying to protect your colonies from the Ascendancy, evil space cockroaches who will rape your women and pillage your village. The story that Cadenza’s cooked up won’t win any awards for creativity, but it’s not like anybody plays turret defense mods for their gripping ludo-narratives, so there’s no use bitching.

The real reason to play Sol Survivor is because it’s a relatively accessible (more on that later), fast paced, and wholly fun game.

Here’s how it works: as usual, your job is to protect a base from a group of increasingly persistent enemies who, in a dismissal of every successful warfare tactic since 1865, all follow each other in single file along a defined route. The go-to defense for space cockroach invasions is to strategically deploy turrets along the road. The result is a lot of turret deployment, and a lot of waiting for the deadly automats to kill a lot of enemies. The most common criticism of the genre is that, while it encourages strategic thinking, it does so to the detriment of any excitement or reflex-based gameplay: the archetypal turret defense game is more like watching a Rube Goldberg Machine than it is playing a game. 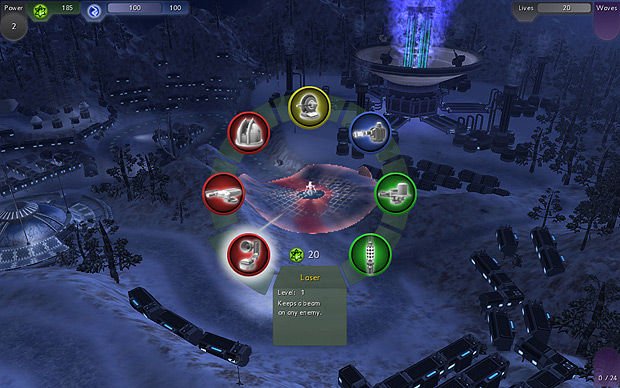 Thankfully, Sol Survivor‘s shtick is that it incorporates “support” functions as well as the more traditional turret deployment. The right trigger brings up a turret wheel and the left, a support wheel. Cadenza’s support mechanic is designed to give the genre a shot in the arm and to introduce a little more action for gamers (like me) who have neither the patience or the military insight to wage a successful turret defense campaign. While your turrets are busy dispatching enemies, you are free to use your support abilities anywhere on the map. Depending on your weapons load-out, these support abilities could include slowing the enemy down, destroying his shields, or making your already-deployed turrets more powerful. In short, using your support abilities closes some of the long waiting periods usually associated with turret defense while adding another layer of strategic thinking.

At PAX I spoke with Rex Hatch, the CEO of Cadenza Interactive, and he explained to me that Sol Survivor is an attempt to repudiate the stereotype that turret defense is slow, antiquated, nerdy, and only suited for PCs, and to “attract the casual gamer to a genre they wouldn’t normally be interested in.”

While we tend to think of casual games as simplistic, Sol Survivor‘s support mechanic makes the game more complicated but also more accessible. On the one hand, the support abilities shift the focus away from strategic turret placement in favor of strategic use of time and resources. In Sol Survivor, success isn’t defined by military precision and turret placement, rather by how well you adapt your support strategy to the current situations. If you put a turret in a stupid place, it’s ok — you can use your support abilites to mitigate.  On the other hand, the support mechanic also gives the game the constant engagement that gamers tend to enjoy. All of a sudden, Cadenza has found a way to make a strategic game appeal to the same emotions — excitement, player agency — that makes FPS and action games popular. 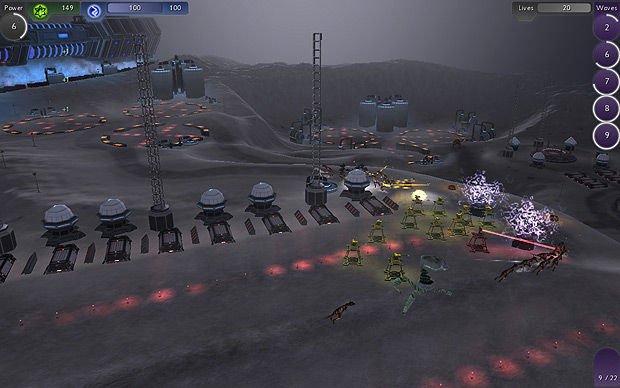 On a similar note, Cadenza has done a fantastic job tightening and balancing the game — I’m horrible at turret defense, but I finished the first level with a heart-stopping one life left. I think the people around me literally cheered when I survived. Hatch promises that the more advanced maps (and particularly the competitive multiplayer modes) look more like professional South Korean StarCraft matches than boring old turret defense.

Since I’m not very familiar with the turret defense genre (mostly because it has the precise stereotype that Cadenza is trying to dispel), I’m not really in a good position to speak about Sol Survivor‘s flaws. My experience with the game was positive, although I did have a hard time differentiating between the different types of turrets I had set up and which support skills I had already devoted to them. The aerial, 360-degree camera works well, but, even by the end of the level, I never made a connection between the turrets’ design and its function.