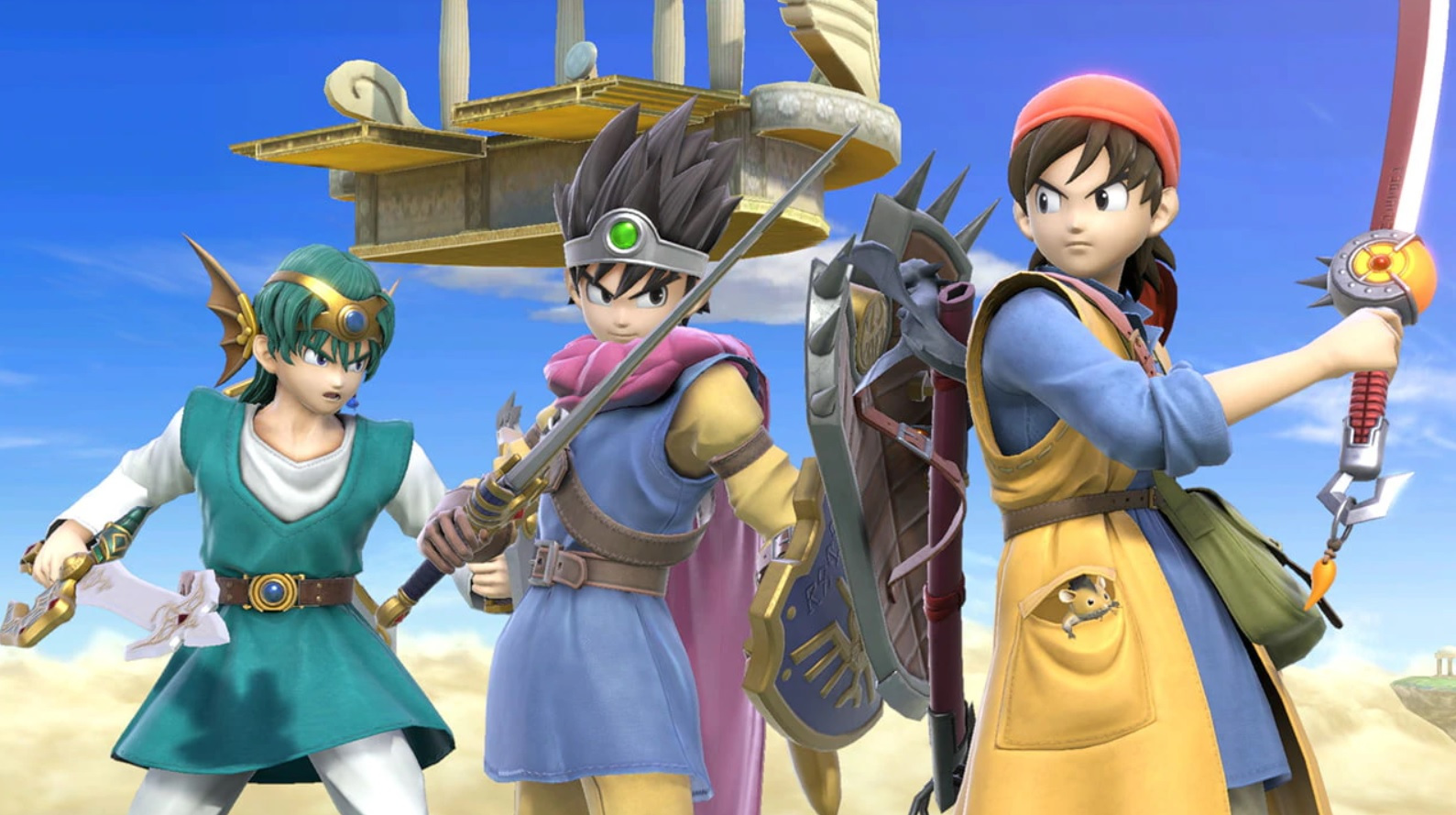 Super Smash Bros. never fails to keep us guessing. Nintendo has truly proven that just about anyone can join the fray, as nearly every publisher will welcome the publicity. We’ve seen all sorts of shocking additions over the years like Solid Snake, Cloud Strife, Bayonetta, and even Banjo & Kazooie.

The recent inclusion of Dragon Quest‘s Hero isn’t so shocking. Square Enix and Nintendo have had a working relationship for ages, and the very first Dragon Quest (Dragon Warrior in the west) was released on the NES. It was a natural pairing.

But man, as usual, did they ever follow through. 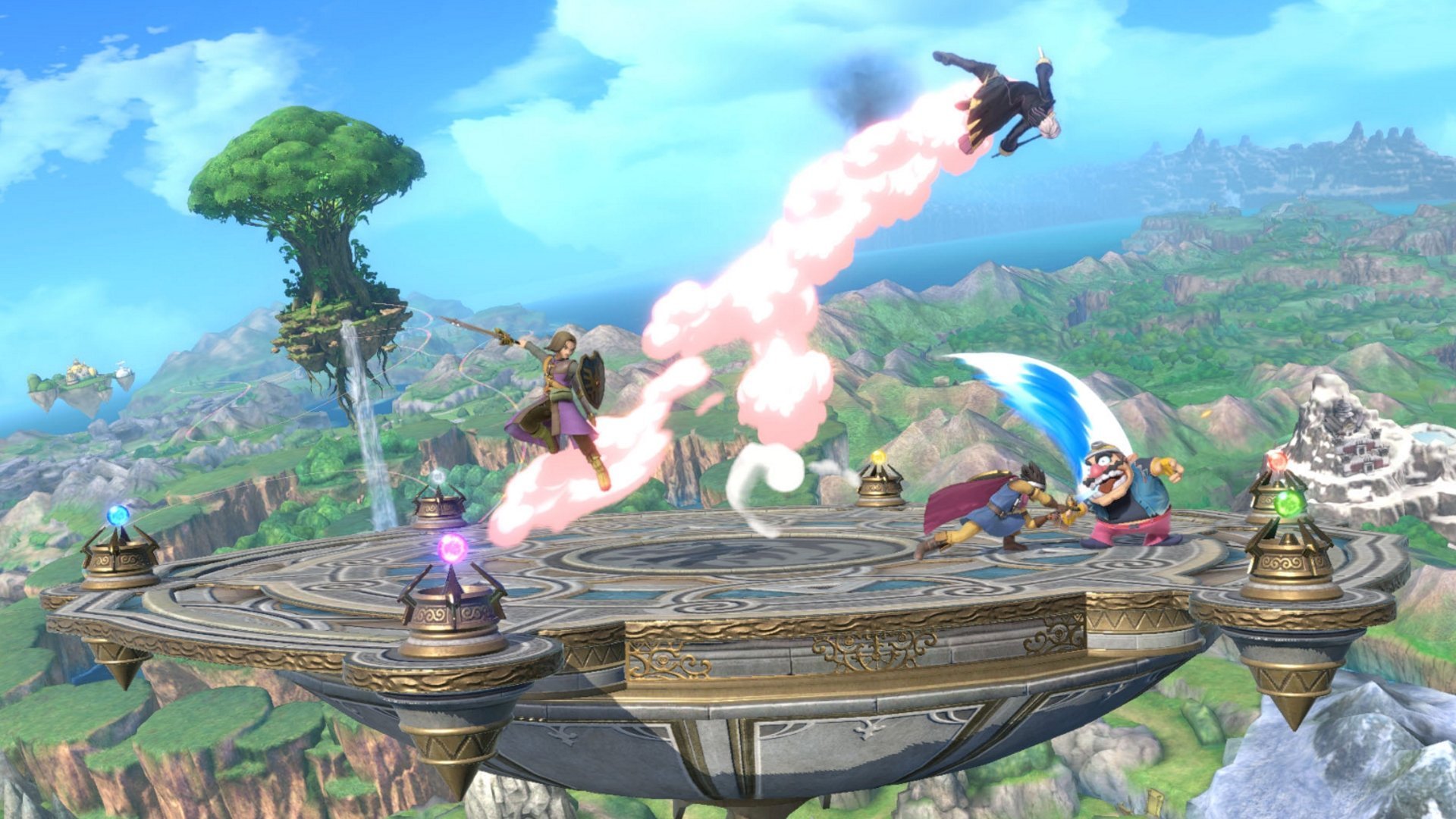 One of the first good signs that Hero was a good egg: his fantastic normals. His neutral combo hits both high and low, and he puts out great numbers with swift tilts and smash attacks. True to his source, Hero’s main gimmick is that most of his special actions are governed by an MP gauge, which regains over time naturally and by being aggressive. Oh and 1/8 if his smash attacks can crit.

His specials rock too. Hero’s neutral is an always-useful charged fireball projectile, but interestingly, due to the aforementioned MP motif, you won’t be able to fire it off if you don’t have the mana (even if you have it pre-charged). Similarly, if you have the MP his up+special throws out a mean set of tornados as you leap into the air: if you don’t, the jump is tiny. This sets up a little meta-puzzle game where you’re constantly figuring out if you have the mana for something: whiffs can be deadly.

Speaking of mana, his down+special is his bread and butter. In what might be the purest JRPG mechanic possible, it queues up a command list with text and random spells. Buffs! Heals! Huge jumps! Massive melee and ranged attacks! By default Hero has access to 17 more abilities because of this concession, with the option to cancel them with a jump or a shield. It requires quick reaction time in tandem with MP management.

There is one hangup, and this mostly comes at the expense of the competitive crowd. If you couldn’t tell (random crits, random command abilities, with randomness inside of all that), Hero is a character that can at times rely heavily on randomness, or as the competitive scene calls it: “RNG.” If this really bothers you, you may not like what Hero is selling. In any other game, I’d actually be a bit more wary. But given that this is Smash, and I spend half my time playing casual matches with casual fans with items, and half my time in semi-competitive Omega Stages with items off, I feel like I’m going to get my money’s worth with Hero, so to speak.

When it comes to Smash I’m all about the aesthetics, and Hero delivers. Like the lovely little Koopa Kid skins spawned from Bowser Jr., Hero’s costume can be toggled to look like heroes from other Dragon Quest games. Along with the whole random spell thing, it absolutely rules when it comes to introducing another bit of entropy into the mix. You could queue up four Heroes on one map and the match wouldn’t feel stale.

Yggdrasil’s Altar and eight new music tracks (Adventure, Fighting Spirits, Battle for the Glory, Wagon’s Wheel March, War Cry, Marching Through the Fields, The Hero Goes Forth with Determination, and Unflinchable Courage) are the other part of the equation: keeping in line with Joker’s release and Nintendo’s promise to do each DLC drop as a trifecta of sorts. I hope they never stop this trend and we eventually get a “Fighter’s Pass 2,” because this whole immersion concept where you basically get a mini franchise expansion each content drop is fantastic.

“Humble” is probably the best way to describe Yggdrasil’s Altar. This is a very commonly themed open air arena with a big spot to brawl in the middle, with smaller little floating islands off to the sides: a concept that’s been in Smash since the beginning, with 64’s Super Happy Tree. On paper it doesn’t look all that exciting. But in motion, with the glorious Dragon Quest soundtrack playing in the background while you’re slinging spells and fighting off Mimics, it’s a little more eventful. I’m happy every time it comes up in the random cycle.

Dragon Quest‘s Hero might not be a mind altering Smash DLC drop, but like his penchant for saving the day in any given universe, he’s up to the task. The game is better because Hero is in it.