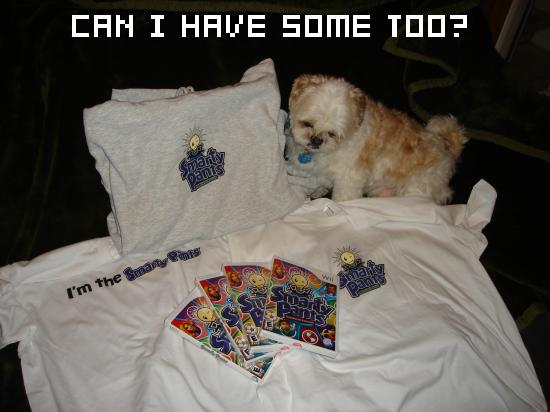 Destructoid has some cool swag to make you smarter and all you have to do is dress badly to get it.

EA’s newest family trivia game, Smarty Pants for the Nintendo Wii has just launched into stores and Destructoid wants to get a few copies into the hands of some lucky Dtoid readers, along with some extra swag. Just our way of bringing families closer together … with trivia games for your family to fight over this holiday season. Sweet, huh?

Smarty Pants has 20,000 questions under 8 different categories including games, which are tailored to fit each player’s age. You can play by yourself, play against other players or work together to answer the questions in record time.

So, how do you score one of these sweet prize packs? Well, we want you to snap a picture of yourselves in the weirdest or ugliest pants you can find. I’m talking the stuff only your half-blind grandfather would wear as extra pants when his depends fail.

Post the picture in the cblogs under the title, “Ugliest Smarty Pants Contest” and we’ll announce the winners on January 2nd, 2008. Entries can be posted up to January 1st at midnight EST.

[Writer’s note: My dog is in the picture, because he wouldn’t move. Little rug with eyes tries to steal all my gaming stuff.]