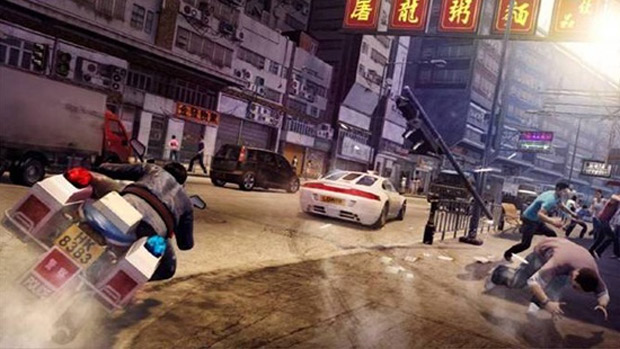 Last year, Activision killed United Front Games’ True Crime: Hong Kong and Square Enix subsequently picked it up, raising hopes for a better tomorrow. It has now been retitled Sleeping Dogs, with a tequila-infused live-action trailer to celebrate the announcement.

The trailer is intended as an homage to the Hong Kong brand of action movies John Woo pioneered in 1986, who singlehandedly revived the dwindling regional film industry at the time. It’s the kind of homage that Sleeping Dogs is also supposed to provide as a game, and according to the revived title’s official blog the hard boiled actions seen in the trailer reflect those you can perform in-game.

Further details on Sleeping Dogs are rather sparse at the moment, but it still sounds like a True Crime title. You’ll play the role of undercover cop Wei Shen, who is working on the inside of the Hong Kong Triads with the goal of rising up through the ranks and taking them down. Expect a mix of vehicular manslaughter in an open world, third-person gunplay, and melee combat with a Bourne-style “cinematic set of environmental takedowns using improvised weapons from circular saws to phone booths, incinerators to refrigerator doors.”