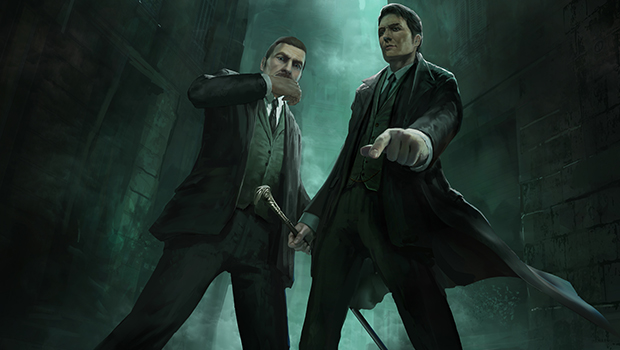 Crimes and Punishments consists of 8 cases to play taking place in 1887, which of course in true Sherlock Holmes style all tie in together somehow. The game reaches 20 different areas of London, both the richest and the poorest with lots of graphic details. Players can switch between the third- or first-person view, allowing them to choose which perspective is best suited for investigating.

There are a few really interesting features that sparked my interest – the first being “Sherlock Holmes Vision” which allows players to see a completely different layer of the crime scene. For example, if you notice something missing on a shelf you can pull up the vision to imagine what could have been in its place. During interrogations, players can also use Sherlock’s special abilities to ascertain certain details about the suspect. For example, Sherlock can analyze the type of fabric someone is wearing and relate it to their social status, or notice small scars and how fresh they are, etc. Sherlock can then use this information against suspects during the interrogation.

Players can also pull up Sherlock’s “deduction board” at any time to see detailed notes on collected evidence and interrogations. It’s a neat visual board that assists with piecing together various parts of the case. Players can choose what they want to do with the information, namely prosecuting or acquitting suspects. The best part about this game is that it doesn’t tell you if you’re right or wrong – you just continue through as the choices you’ve made affect your reputation and other unknown consequences. This is what LA Noire should have been – an immersive detective experience with actual weight and consequences.