Wang is back, baby

2013’s Shadow Warrior reboot from Devolver Digital made a name for itself when it was released on PC. As most reboots of classic titles tend to go for a more gritty and toned-down vibe, the developers at Flying Wild Hog went in the opposite direction and embraced the ridiculousness of a modern ninja warrior battling foes with a variety of classic and current weaponry. It was a game that shouldn’t have worked, especially with a main character named Lo Wang, but it did, and totally delivered on satisfying and over-the-top action.

Thankfully, the developers are back with another trip to the crazy world of ninjas and demons with Shadow Warrior 2. With a larger focus on co-op, along with expanded gunplay and swordplay, they aim to build a worthy sequel that makes its predecessor look like child’s play. During a meet-up with the creators, I got a good look at what this new foray into the Shadow Warrior universe has in store. 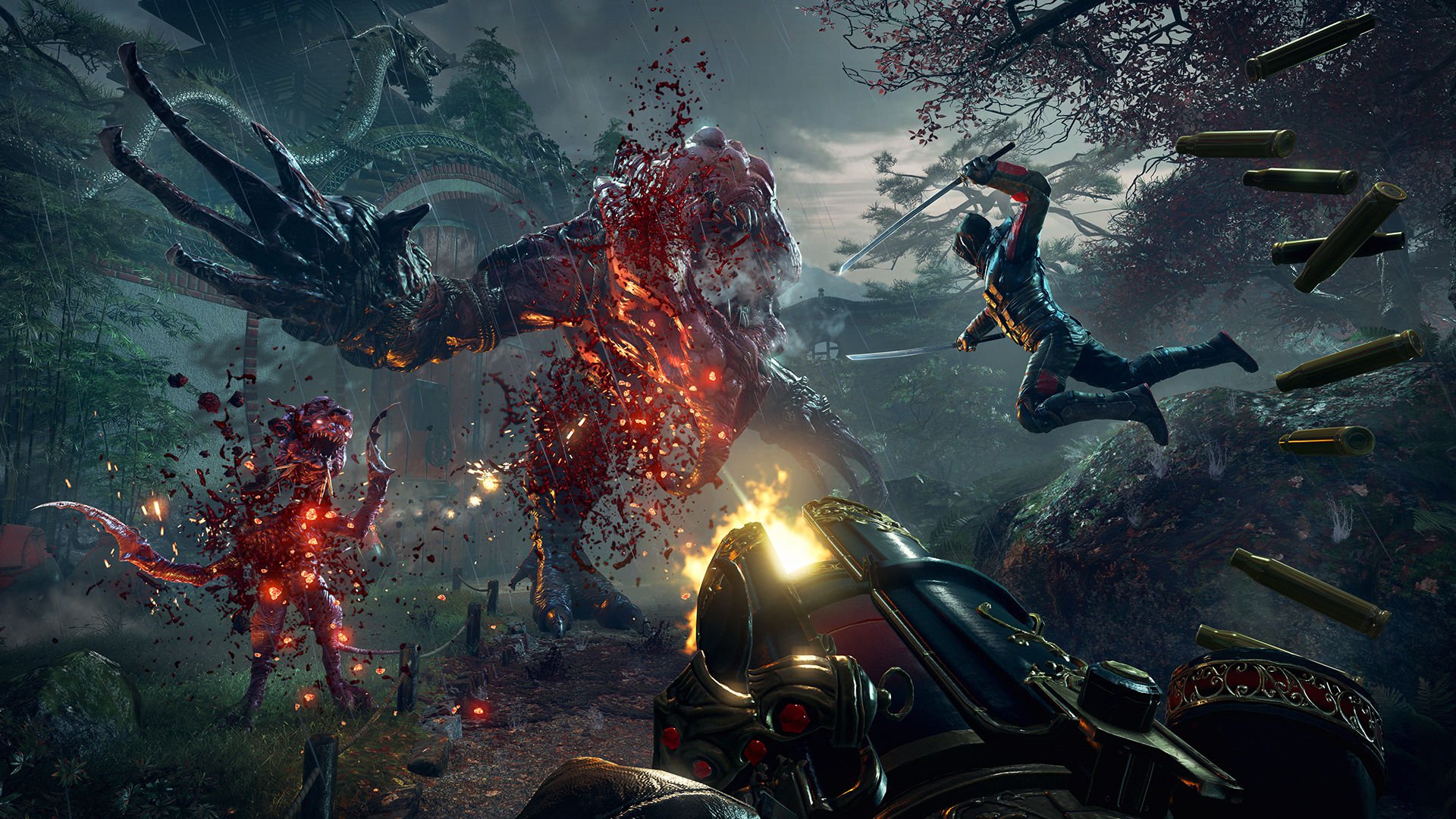 Set after the events of the previous game, Lo Wang returns to battle armies of demons that have invaded our realm, and it’s up to him and his new ninja warrior buddies to take them out. The plot is as ridiculous as the original, and probably more so with the addition of new characters and a much larger arsenal of weapons. The claws and throwing blades are extremely fast, and make quick work of the demons in incredibly gory fashion.

One thing that was immediately clear was that the gameplay of Shadow Warrior has been considerably expanded. The corridor-shooter aspect of the original game has been ditched in favor of more open levels to explore. While not open world, there is much more room for exploration and traversal throughout the environments. Platforming and general movement has been enhanced to take advantage of the new lateral movement gameplay. Wang will no longer have to worry about managing his stamina, as his ninja abilities have given him enhanced strength and dexterity, allowing him to climb walls and run across rooftops with ease.

Moreover, the general structure of the game has been changed as well. With a new hub area, Wang and his allies will be able to acquire quests and upgrade their characters before venturing out into the missions. As the last game was largely a straight shot through a series of chapters, SW2 gives players more freedom in how they tackle objectives. This also allows players to revisit earlier missions much easier to re-engage past foes in order to build up Wang’s strength. With the new character progression system, players will be flesh out the Shadow Warrior in very unique ways. 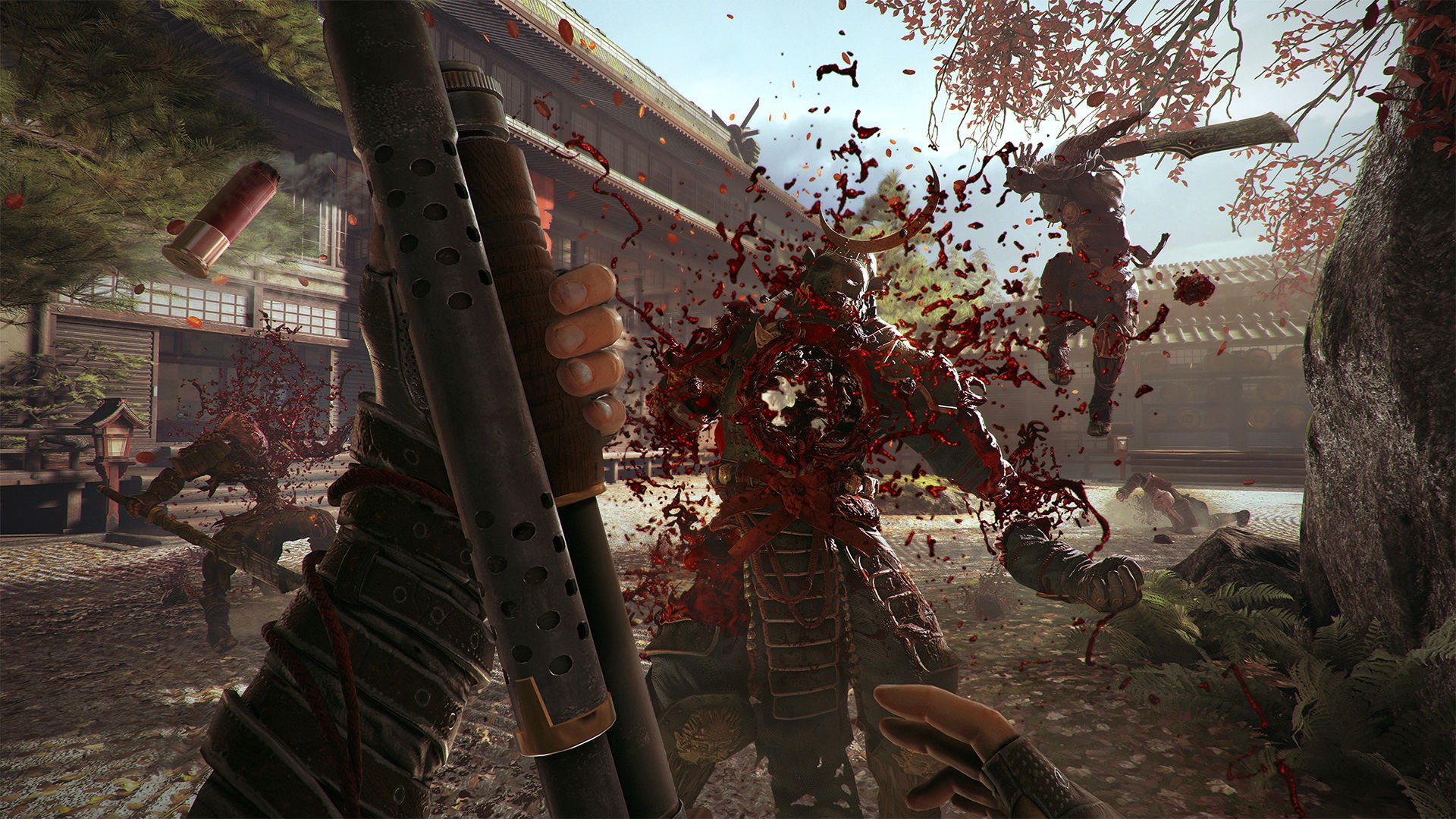 Since the last game, the developers decided to seriously up the combat and character growth aspect with brand new RPG mechanics. As you battle enemies, you’ll level up your weapons and acquire gems to augment your equipment, giving them elemental properties and buffs. While it’s not Diablo-esque loot where you’ll find near-infinite forms of the same weapons, the gems you find will give your gear some interesting buffs that will vary from character to character. Of course, you’ll be revisting missions very often, and the devs decided to include new procedural content for the level design.

Every mission (save for specific story events) will feature procedurally generated level design and content. Enemy positions, terrain, buildings, and weather conditions are all random, which will make repeat visits interesting. During one level, we came across a town with several buildings and mobs of foes to take down. The design itself was impressive, as it encouraged a large focus on vertical movement and flanking of the demons. Keep in mind that this was random, and it will feature an entirely different design. Furthermore, the level design will also take into account side-quests and other events that happen in real time, which will add more flavor.

I only had a brief amount of time with Shadow Warrior 2, but I was plenty pleased with what saw. I sometimes get worried when action games go more RPG for their sequels, but the additions to the growth system and action only enhance the core sword/gun play. I was impressed with SW2. Lastly, co-op play looks to be a lot of fun, and though the new characters are mostly anonymous ninjas, each player in group will play as Wang in their own game, while the others appear as the newcomers. It’s in a clever way of making sure everyone gets a bit of Wang.

With release set for sometime next year across PC, PS4, and Xbox One, fans of the original will be getting more Shadow Warrior into their hands much sooner than they think.