What if you took the creature editing power of Spore and worked it into a platformer for the Wii? That’s what Spore Hero is in a nutshell. We had the opportunity to get a peek at the title at a pre-Comic-con EA event last night.

Players will still have the full functionality of the Spore Creature Creator from the PC version, modified to work with the Wii Remote. You’ll have some 250 to fiddle with to make your creations. It’s what you do after creating your character that is new: A story and adventure was developed just for the Wii. You come crashing onto an alien planet in a blue meteor. That’s great; you’ll emerge and evolve and represent the power of creation What’s bad is that a red meteor follow, and inside awaits evil. You’ll take on this evil as the hero, fighting against it with your creature strengths.

The parts you gradually unlock for the creature creator are for more than just looks. Specifc parts have specific abilities, and you’ll need to modifiy your hero to overcome obstacles. Some parts will improve things like combat, while others can, say, make you a better swimmer. You’ll purchase these parts with blue meteor pieces you collect during your quest. What’s interesting is that your nemesis from the red meteor will also gradually increase in ability, so you’ll have to work to keep at his level.

As for the game itself, it’s a full action adventure, with platforming, fighting, and puzzle elements. Only one level was on display, but we could already see how the game works; it really fits in line with other 3D platformers on the Wii. When asked about total play length, an EA representative told us that the platformer could be up to 15 hours long, not counting the time you’ll spend in the creature creator. 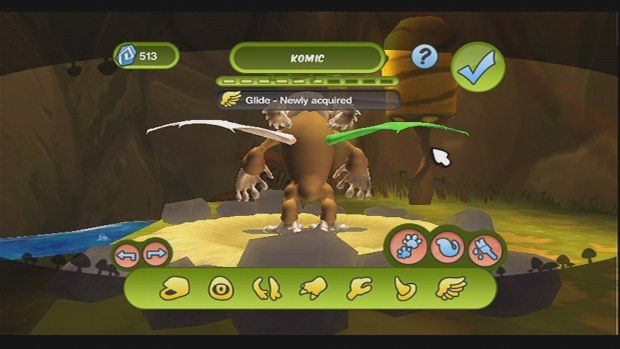 I believe he can fly.

You’ll use the Wii Remote and Nunchuck to take on enemies that you’ll come across, putting the elements you’ve incorporated into your hero’s design to good use. Got big feet? Kick ’em silly. Even with the most oddly designed creatures, you’ll get a kick out of watching them in action, thanks to the procedural animation techology that has been worked into this Wii version.

We also had a chance to take a look at the multiplayer aspect, which was essentially a fighting game. Heroes you create can be dropped into an arena to duke it out. Any of the parts you’ve earned in the story mode can be applied to your fighter, and then can be tested out on other characters that you design, or even load from an included selection. What’s nice is that there’s no handicap for your fighter — you fight with what you’ve got.

We didn’t get to see a lot of Spore Hero, but what we did see looked solid, and we’re interested to see how the story theyy’ve created for the Spore universe unfolds. Look for its release on Nintendo Wii this Fall.