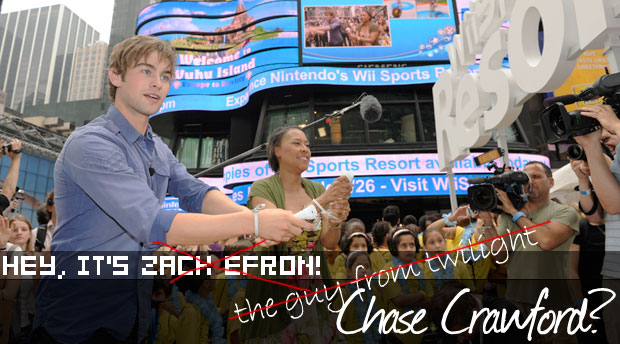 Leading up to the event, Nintendo issued about fourteen press releases, to make sure no one missed that it was happening. We didn’t — we sent Samit, our resident NY, who we haven’t heard from all day long. Maybe he’s drowning in sand. Or having too much fun. We’ll find out soon, as we all eagerly await his coverage.

These pictures issued by Nintendo give you a good idea of went on, though. Of note, Nintendo’s vice president of Corporate Affairs Denise Kaigler stands by to make sure actor Chace Crawford doesn’t pull a muscle while playing the fencing game. A mother tried to stop a child from drowning itself in the wading pool. A bunch of people got lei’ed. Get it? Like they got “laid”? Hah!

We have a full reviewed of Wii Sports Resort on it the way, delayed by a shipping error that had the game landing at our doorstep today… instead of last week. But based on the time we’ve spent with it so far, we think Nintendo might have another hit on its hands, with or without the defacing of Time Square’s Military Island.