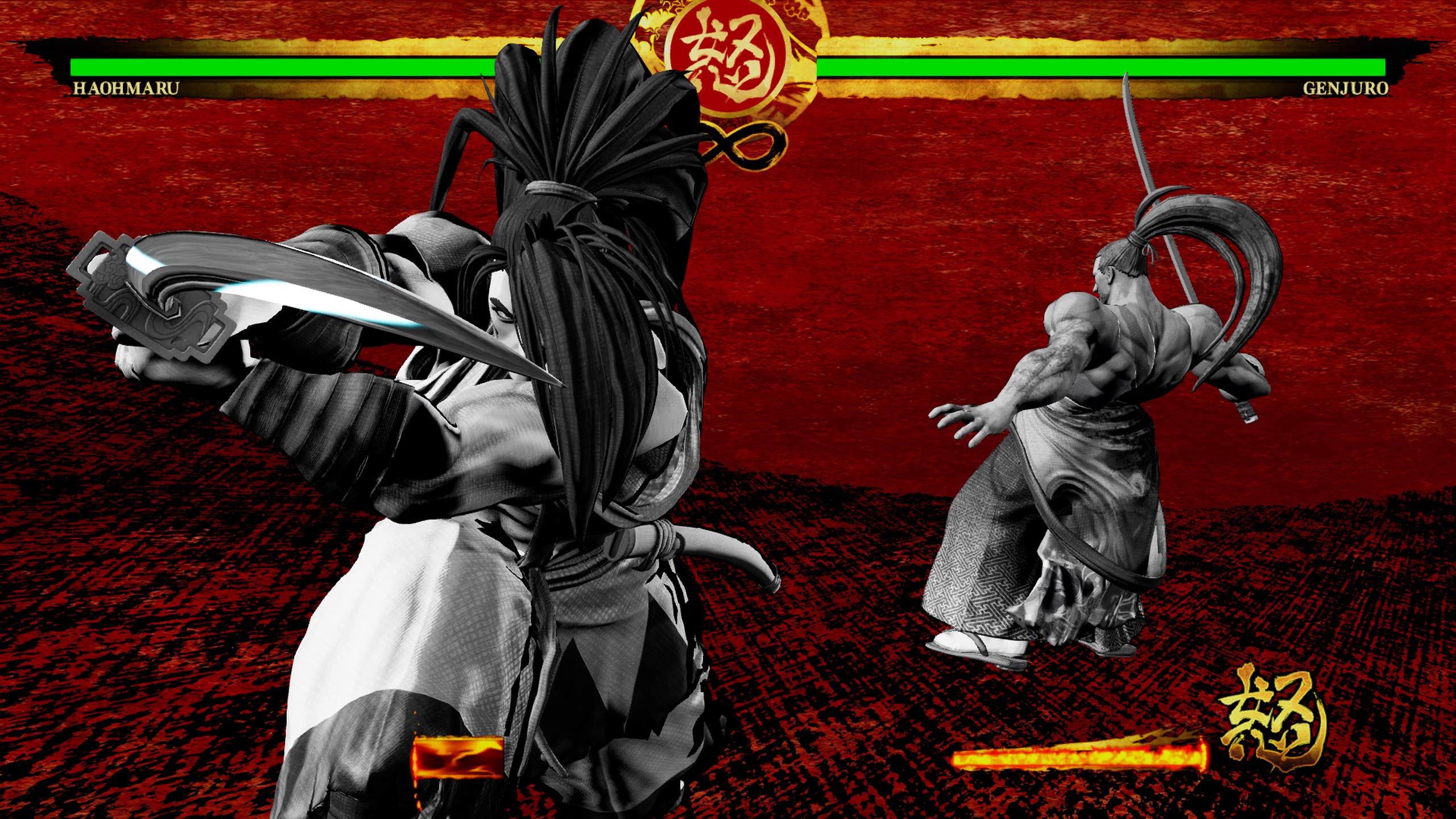 SNK has a rich history of creating arcade classics for the Neo Geo hardware. SNK was easily the biggest rival to Capcom in terms of fighting game output. The ’90s saw series like Art of Fighting, Fatal Fury, and King of Fighters pop up and take the fight straight to games like Street Fighter, Rival Schools, and Darkstalkers. It was quite the time to be a fan of fisticuffs.

One of the more revered franchises from SNK during that period was Samurai Shodown. Taking a far more realistic approach to fighting with less of an emphasis on flash, Samurai Shodown was all about recreating the art of katana fighting. While cartoonish designs and varied move sets added diversity to the proceedings, this wasn’t a series meant to compete directly with anything Capcom was making.

Now, a new entry in the series is finally coming to fruition. With 2019 seemingly being the year of the samurai (Sekiro, Ghost of Tsushima, and Nioh 2 are bringing the Edo Period back), what better time than now to revive this fan-favorite franchise? I may not be a long time fan of Samurai Shodown, but my short time playing this new entry left me feeling very nostalgic for SNK’s glory days. 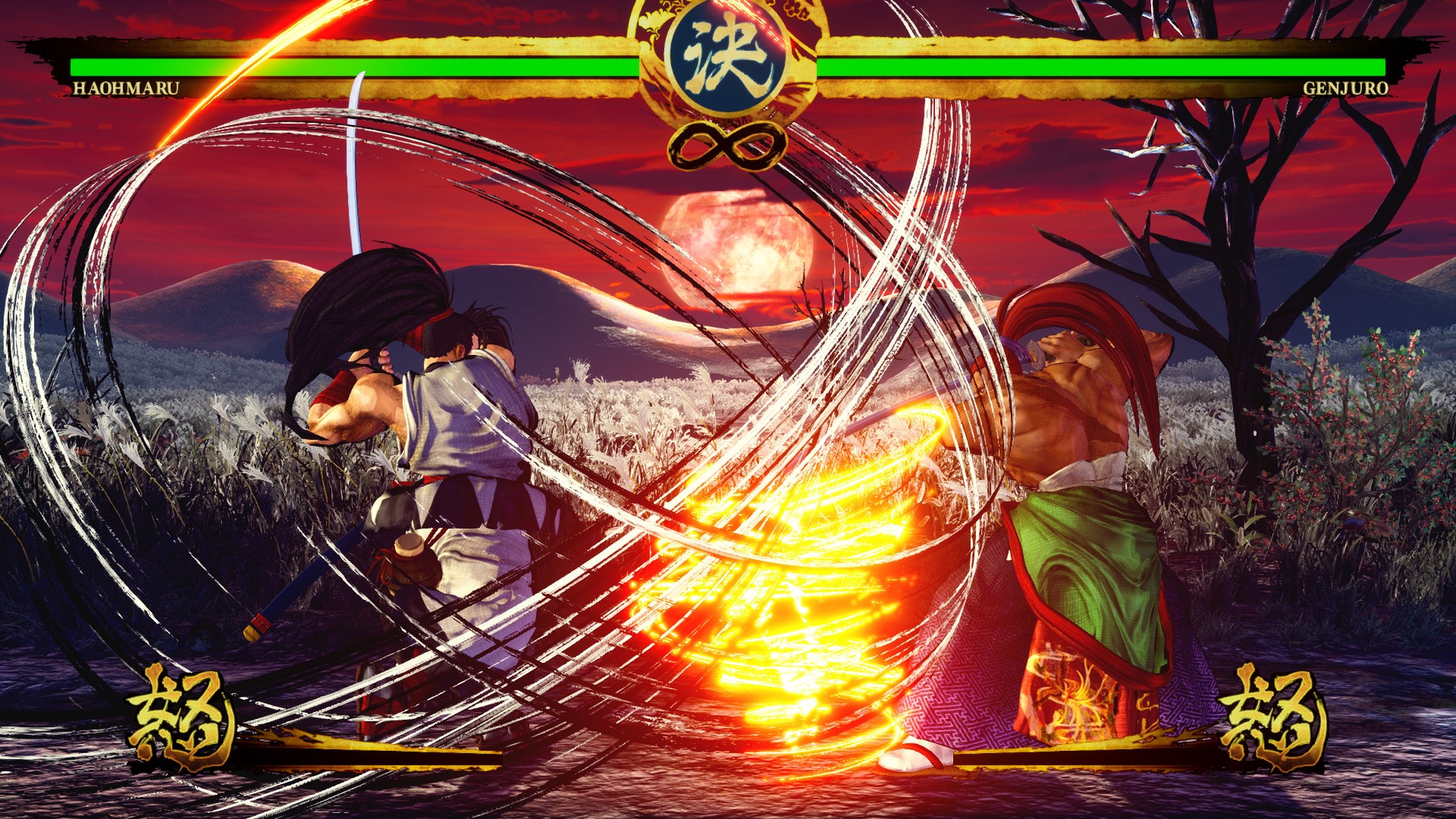 Regarding content, I can confirm that Samurai Shodown will feature 16 characters at launch with additional DLC coming throughout 2019. SNK wasn’t ready to talk any specifics with regards to paid fighters but confirmed that 13 veterans of the series will be returning along with three newcomers for the base roster. I’ve always stuck with Haohmaru over the years, but it’s nice to see the likes of Hanzo, Nakoruru, Charlotte, and Halford present. It doesn’t seem like the paid characters will be returning stars.

As far as modes are concerned, each character will have their own mini-story mode that builds up to a conclusion. This particular entry is a prequel to most of the series but does take place after Samurai Shodown V (which is the earliest point in the timeline). This was done to allow SNK to bring back the expected fighters alongside some of the characters introduced in later games, in an effort to cater to both ends of the fan spectrum.

A standard arcade ladder is present, as well as local versus and traditional online options. Ranked and Player matches will be available for you to stake your claim in the Samurai Shodown-verse. The most interesting addition has to do with this title’s machine learning AI. No matter which mode you’re playing, Samurai Shodown will create ghost data from your playstyle and upload that to a central server.

You can tackle yourself in a ghost AI mode, or you can verse some of the world’s greatest fighters without them knowing. The feature was implemented into the game based on one of the designers doing his senior thesis on machine learning, which fascinated him. Think of it as something along the lines of what Microsoft does with Forza’s “Drivatar” system, just with vastly different parameters.

Theoretically, this option will provide you the opportunity to recognise your own weaknesses and perfect them. It opens up the chance for those without local tournament scenes to get competitively viable since they won’t be dealing with AI exploits while working through a set campaign. It can also give you something new to tackle when your friends aren’t around.

As for how it plays, Samurai Shodown’s mechanics feel like a mixture of Samurai Shodown II and V. The main goal for SNK when creating this new entry was to keep the same design mentality of the past. Samurai Shodown has never been about learning combo strings and repeating them, but getting into mind games with your opponents before landing a few crucial strikes. 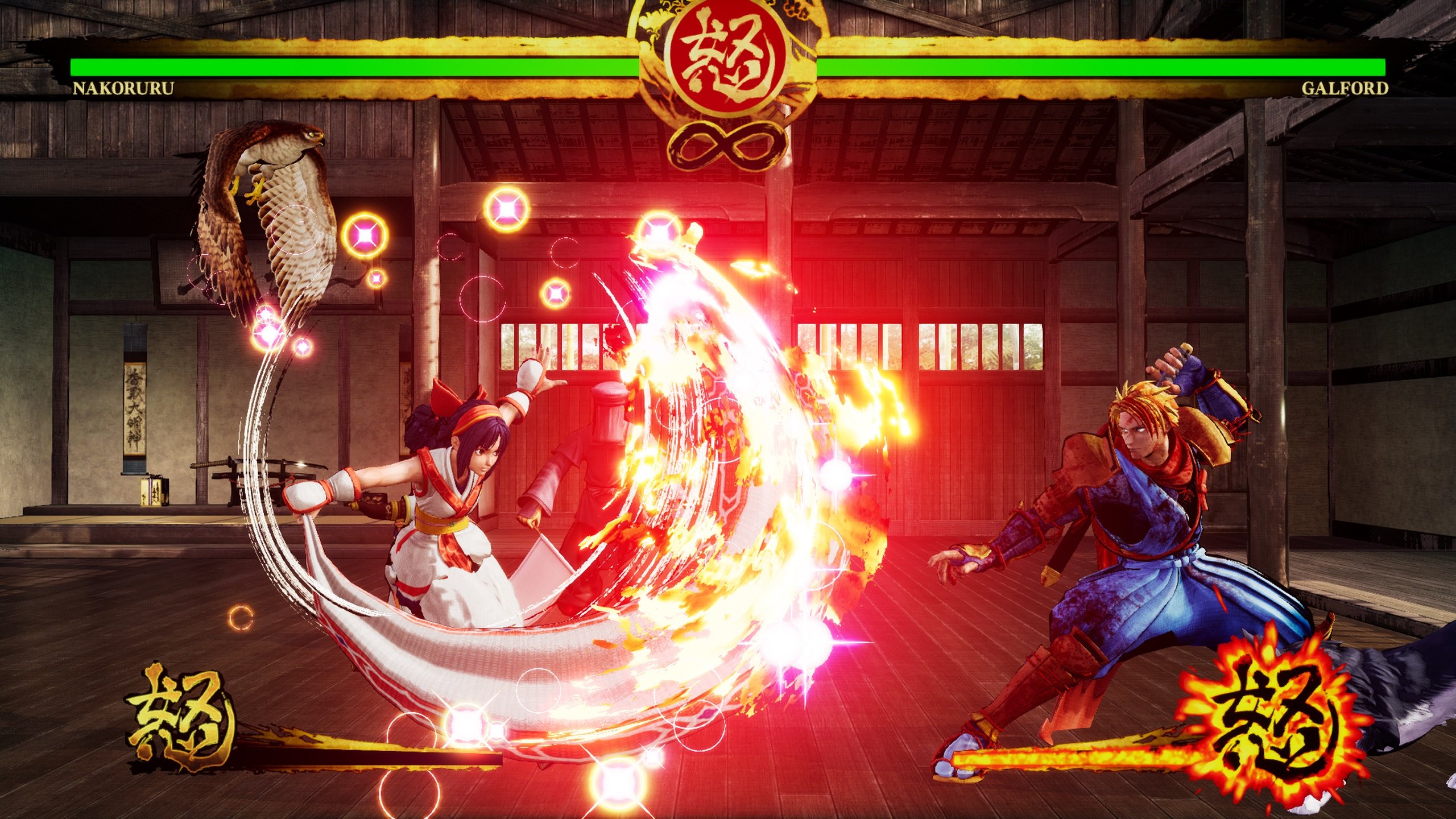 That’s not to say Samurai Shodown is a simple game. Despite playing like a game made in the ’90s, there are a bunch of different mechanics at play in 2019’s Samurai Shodown. Every character has a universal overhead, called the “Surprise Strike.” This allows characters with traditionally no high strikes to land hits that will open up their opponents for more attacks. Everyone also has access to deflects, which can disarm your opponent if timed correctly. There are even the requisite special moves, though their usage can potentially leave you open to devastating counter blows if missed.

Samurai Shodown perfectly encapsulates the old saying of, “Easy to learn, hard to master.” While I was able to perform hit confirms and land special attacks, I was told of scenarios where players can disarm their opponent, but then the opponent will be able to clasp the rival’s weapon and disarm them as well. You can even throw down your own weapon and fight barehanded to really rub it in someone’s face. There are a lot of things going on despite the lack of combo strings.

Surprisingly, Samurai Shodown still utilizes the four-button Neo Geo layout. Obviously, modern controllers aren’t built like that, but everything is operated with a Kick button and Weak/Medium/Heavy attacks. The shoulder buttons are just different combinations of those buttons, so Kick+Weak, etc. I didn’t get to figure those out, but I do know that supers and this title’s new mechanic, the “Lightning Blade,” can be performed by tapping whichever two buttons together. 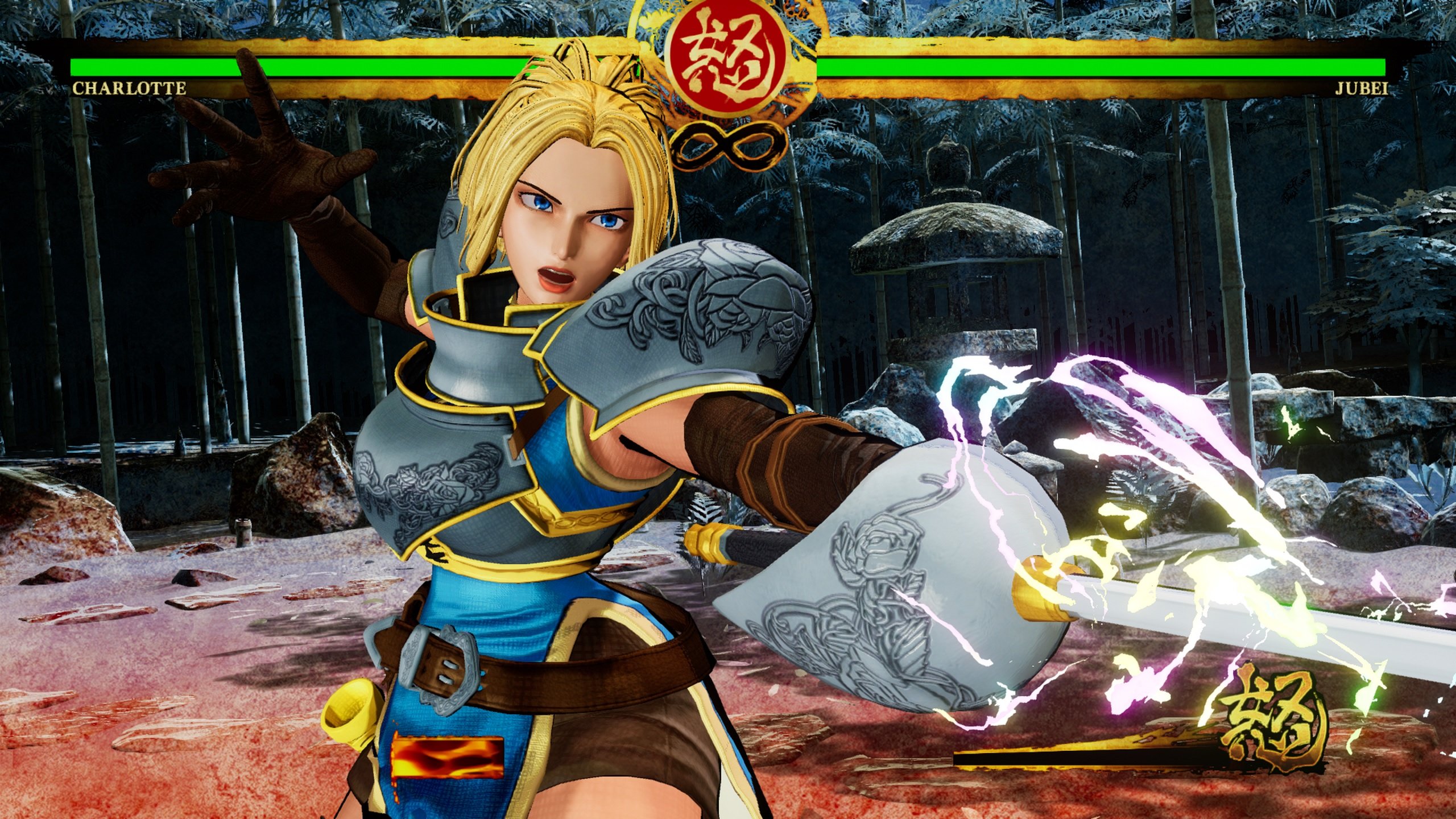 The most interesting mechanic, to me, was the way in which the super meter works. In something like Street Fighter, you’ll build up a gauge over the course of a match that allows you to unleash a super move after inputting a command. If you miss your attack, you’ll be able to rebuild that meter and try again. While Samurai Shodown does feature traditional supers, there are some new mechanics that allow you to wager your meter for insane damage.

This is where the new “Lightning Blade” command comes in. Once your meter is full, you can enter a rage mode that doubles your attack power for a short while. During rage mode, you can opt to spend the entire meter on a single attack that will deal back all of the damage you’ve suffered to your opponent at once. Conversely, if you go into rage but then don’t land this attack, your super meter will be spent and removed from the match.

The regular super moves from the series past do not cancel out this meter, but performing a “Lightning Blade” will then forbid you from doing supers for the rest of the match. The idea is similar to something like the Ultra Meter from Street Fighter IV: it’s a comeback mechanic for less skilled players that has a huge risk/reward mechanism tied to it. You can tie up a match with a single strike, end the game with a decisive blow, or trick your opponent into wasting their meter and removing potential attacks from the game. 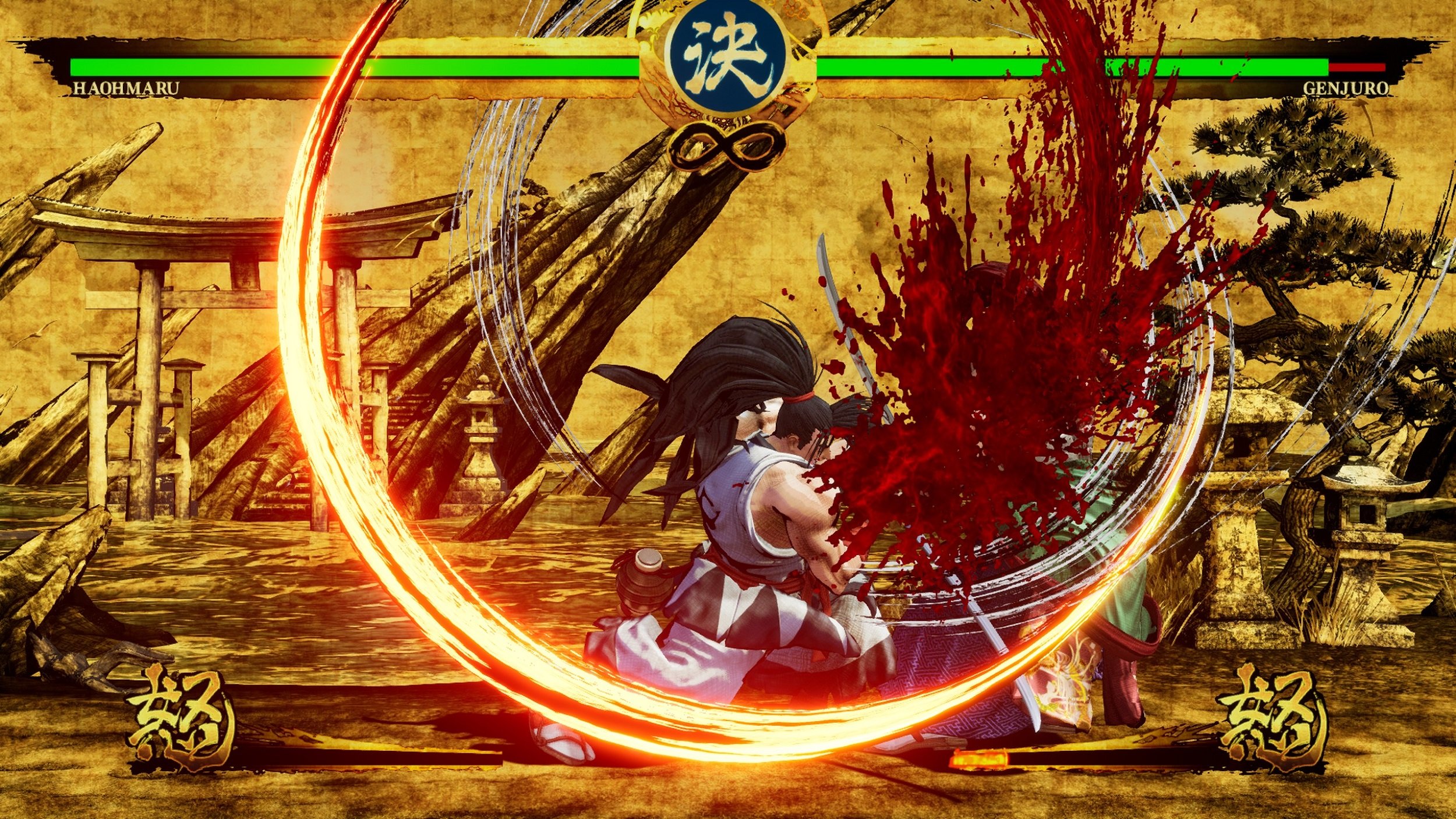 It makes me think of how “Fatal Blows” in the upcoming Mortal Kombat 11 operate. You need to weigh the pros and cons of utilizing such a maneuver in the heat of battle, but it can quickly turn the tides in your favor if executed at the right moment. Maybe you want to grab an early lead, or perhaps you’re a master at faking out your opponent by playing purposely sloppy. Whatever the case, it leads to moments where both players are afraid to strike, but with their meter burning and an action becoming necessary. It feels exactly like a samurai stare down.

I got quite a bit of practice with it, too. I played a bunch of rounds against the SNK reps present and managed to land this flashy attack a few times. There was one particular stare down we had where I had to play extra cautious so I could counter. I also love that despite not being a combo-driven game, certain moves will hit confirm and allow you to follow-up. This is where I planted my “Lightning Blade” and it worked wonderfully.

I even surprised the devs with how adept I was. When I was asked to come out, I had some reservations since I’ve only played a few entries in the series. I wasn’t a Neo Geo kid and I’ve not had extensive practice with prior entries. My main knowledge comes from Haohmaru’s inclusion in Capcom Vs. SNK 2, but I did spend some time playing SNK’s back catalog on GameTap years ago. I wasn’t sure I would be the best fit for demoing the fighter. 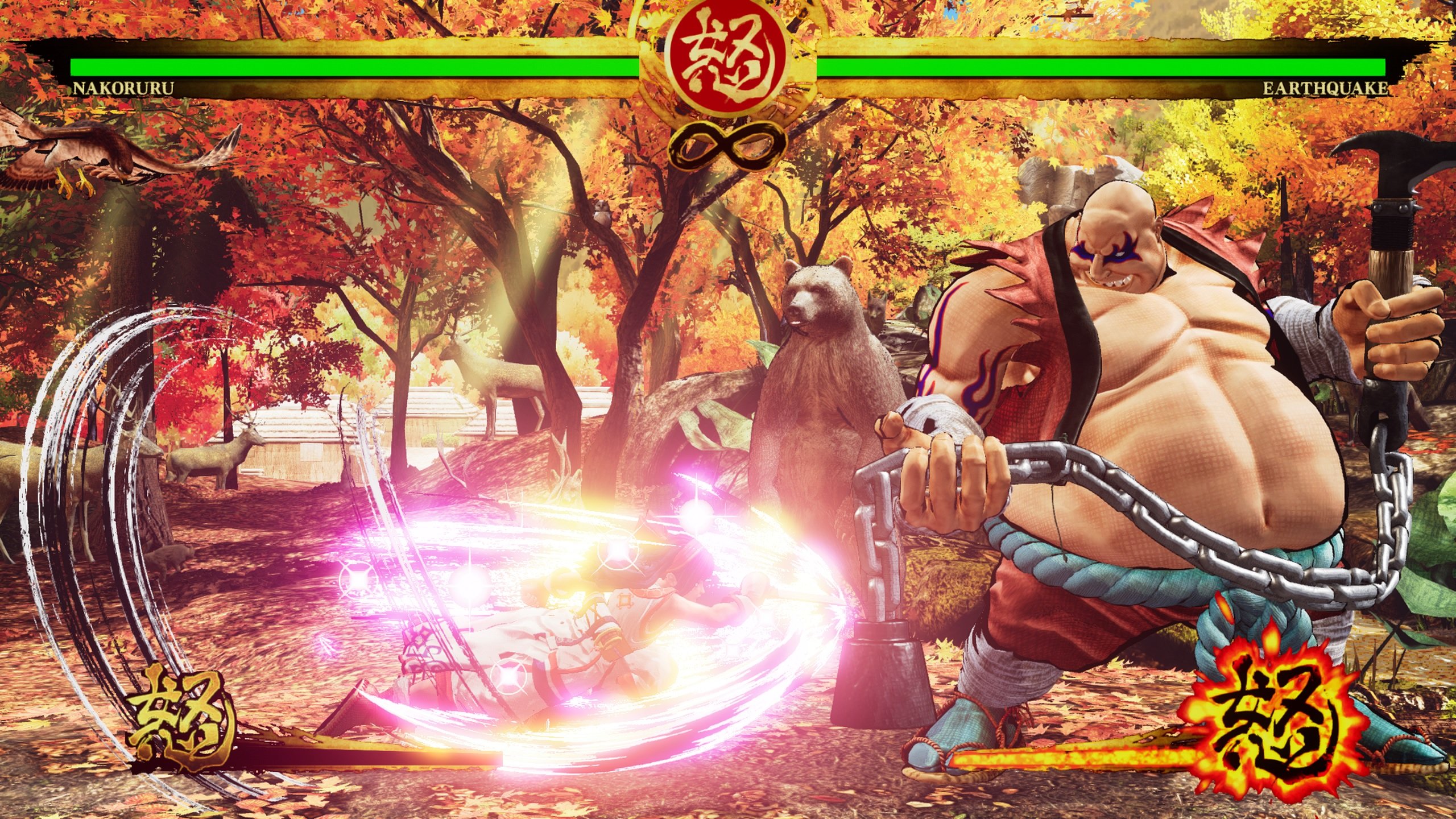 Turns out I should have been psyching myself up because I was the first person to give the devs a real fight. We had some great battles that saw them utilizing all of the game’s mechanics to topple me. I got a crash course in how this fighter works and I’ve become hooked.

A lot of what drew me in came from the excellent art style Samurai Shodown has. While I demoed it on a base PS4 console, I was assured that PS4 Pro and Xbox One X would be getting full support for the title. Even without seeing this running in 4K, the game looks remarkable. The art style is reminiscent of samurai ink paintings and everything runs at a silky smooth 60 FPS. It perfectly simulates the film techniques that are used in various samurai related media.

If you were wondering about things like fatalities, a lot of the violence has been toned down in Samurai Shodown. I specifically mentioned Samurai Shodown Sen to the team, which was an Xbox 360 entry that basically killed the series. That one put an emphasis on super gory finishers in lieu of creating a competent fighter, so you can bet the team working on this reboot tried everything to get away from that title. 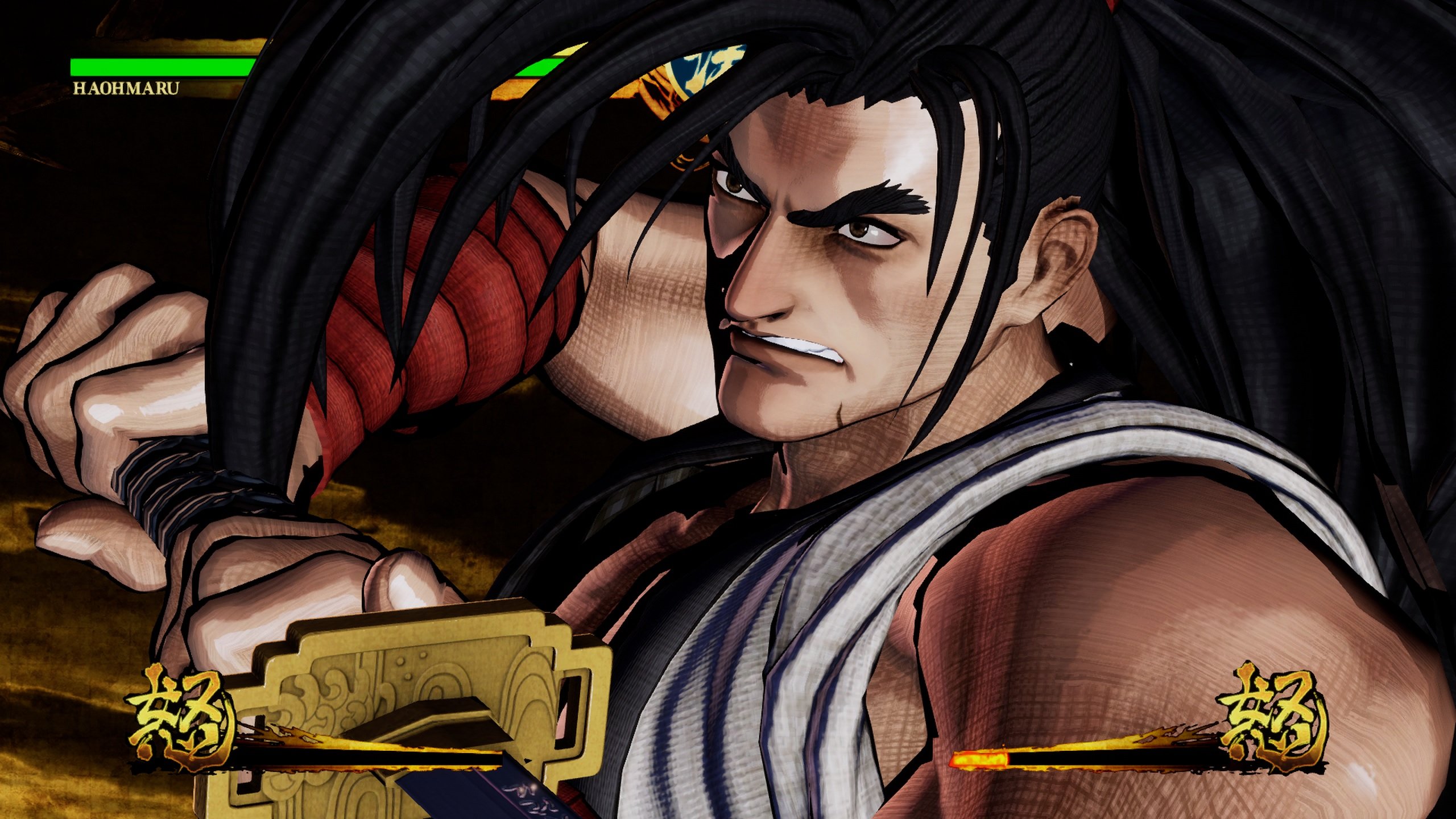 That isn’t to say blood isn’t present. You obviously can’t accurately recreate a samurai setting without blood and Samurai Shodown does have a ton of that. Some of those “Lightning Blade” attacks even result in your character spurting blood into the background like an Akira Kurosawa film. If your final strike on an opponent is a heavy attack, they’ll even split in half, though not in a Mortal Kombat styled manner. The violence factor isn’t the main selling point of this latest entry, which is for the better.

The one thing that might hold Samurai Shodown back is the seeming lack of content. Having a story and arcade mode straight out of the box is a huge step up from something like Street Fighter V, but this does feel like a fighter targeted more to the hardcore than a casual crowd. I definitely urge everyone to give it a shot, but I wouldn’t be surprised to see a niche audience develop around this title instead of it becoming a mainstream success. That’s pretty similar to the original games, though, so maybe SNK is planning for that.

While no firm release date has been determined, Samurai Shodown will be launching for PS4 and Xbox One in Summer 2019. The Switch port is set for a Q4 window while the PC version is still TBA. I’m not sure when the season pass will be available or even how many characters it will contain, but SNK will be announcing more details on that closer to release.