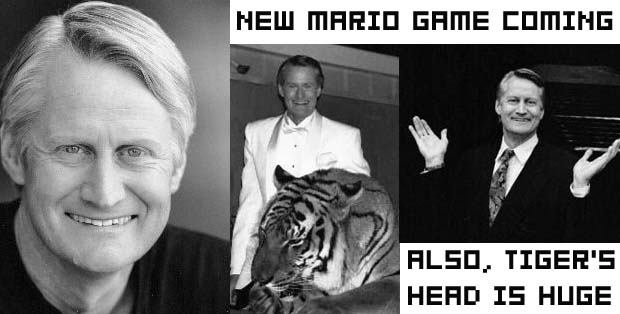 I wonder if Nintendo is pissed at Charles Martinet right now? The company is known for it’s secrecy, and their tendency to keep new games unannounced for as long as possible. It’s hard to imagine that it was part of Nintendo’s master plan to have the voice of Mario announce to the world via Twitter that there is another new Mario game in the works right now, something separate from New Super Mario Bros. Wii and Super Mario Galaxy 2.

As fun as it is to speculate about Nintendo’s potential feelings of betrayal towards the voice of their famous mascot, it’s even more fun to think about new Mario games. This new project could be anything from the expected Mario Party sequel or new Mario sports title, to something unexpected like a sequel to Luigi’s Mansion, a guest appearance in Epic Mickey, or even the localization of Captain Rainbow.

Take a listen to this creepy Cat in the Hat song performed by Martinet and think it over; what the f*ck is Mario up to this time?