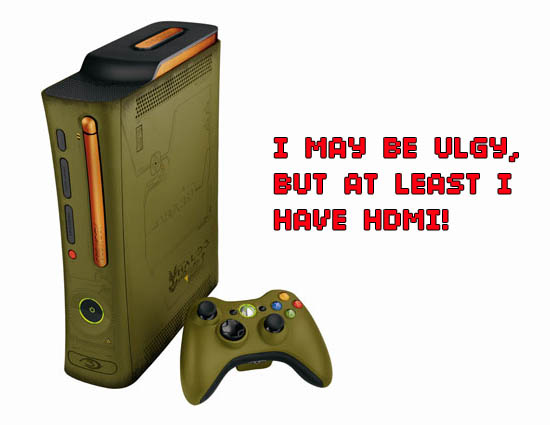 Ars Technica says that they’ve heard from an inside source that Microsoft will start making Core and Premium systems with HDMI ports after the exisiting stock has sold through.

According to my source, Microsoft wants to cut through all their existing inventory of hardware. They will then quietly “soft launch” a new version of the Core and Premium hardware in late August or September that will include an HDMI port. It’s also expected that this new hardware will feature the 65nm process for the CPU and quieter DVD drives. The new hardware will ship in boxes very similar to what we saw on store shelves now, but there will be a small “call out” on the box so you know you’re getting a system with the HDMI connection.

This may be a rumor, but it does have some weight to it. Both the upcoming Halo edition Xbox 360 as well as the currently available Elite sport HDMI outputs. It would make sense that newly made systems would follow suit.

That’s just great!  HDMI outs and cooler running chips? If this turns out to be true, then you’ll have even more reasons to hate your current (probably ailing) Xbox 360.  We have to agree with Ars Technica’s Ben Kuchera – if you think this might be true, you might want to hold off on buying a new Xbox 360.