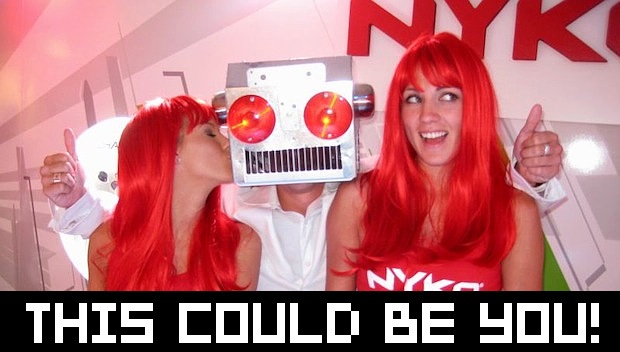 Attending E3 — it’s the ultimate dream. And trust me, as someone who has been there twice, it should be. Hell, it’s the reason Destructoid exists. E3 is absolutely pukka. It takes a a lot of work to get there, though. Breaking into the games industry is not the easiest thing to do, and while some may luck out, being an attendee at E3 is a pretty exclusive club.

But what if you could go to E3 without doing all the work it takes to break into the gaming industry? What if you could attend every gaming convention without having to jump on a plane, deal with convention funk, or actually physically be there? Awesome, right? Microsoft may be planning to do just that — bring the convention to Xbox 360 owners.

Destructoid reader Dr. Rockso was taking an online survey when he was asked to read the following concept and answer some questions about it:

Imagine that interactive, online versions of E3, BlizzCon, GamesCon, ComicCon and every other major video game convention were made available through Xbox Live.

So it might not be like actually attending the event, but it would be a pretty awesome deal. Check below the fold for the full list of features this supposed “Virtual Video Game Convention Service” may have and do give the screen grab* of the survey a look if you’re interested in such things.

The questionnaire explained that this service would be free and that players would be able to walk around a virtual show floor using their Avatar. There would be booths from all the major gaming companies and at each booth participants could check out videos, trailers, developer interviews and even game demos and betas if they were available. Keynote addresses would be broadcast live along with any other events, and you could check out what was happening on the actual show floor through live video. The ability to create a party would also be included.

Now if they can figure out a way to teleport swag into your living room traveling to the convention would become absolutely useless — except for the booth babes and the booze.

*Note: We scrubbed out a name open on Dr. Rocko’s Facebook tab in the image.