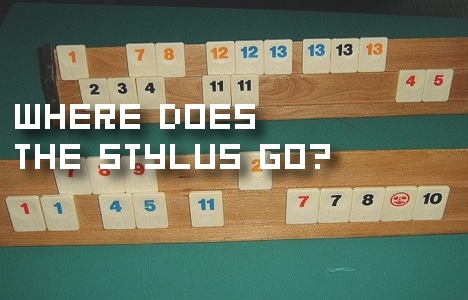 Today, the Netherlands-based publisher Games Factory Online announced that they are overseeing the development of Rummikub for the Nintendo DS. Slated for a release in late 2008, Rummikub is sure to thrill DS fans with its stimulating play, graphical quality, and competitive intensity. The developer of the title, Engine Software, had nothing to say about the project.

But the general manager at Games Factory Online, Jirriaa van Rijswijk, had this to say about the announcement:

When we acquired the official license for this game, we looked for a stable and experienced developer to turn the license into a [successful] release for Nintendo DS. With Engine Software we found the ideal partner for this project, and we are quite excited about bringing this product to the market in the near future.

was originally created in the 1940s. The object of the game is to pile as many dominoes as you can onto a table to create pretty patterns. Once the pattern is assembled, players can then count up points however they desire. The winner of the game is always decided by a coin toss or, in the event of a lack of coin, a fistfight. Rummikub can also be enjoyed with traditional playing cards as well, but the rules on how to play with a deck of cards are a closely guarded secret of the Netherlands’ government.

Hit the break for the full press release.RUMMIKUB® COMING TO NINTENDO DS(TM)

Doetinchem, July 2nd 2008– Games Factory Online (GFO), producer and publisher of Entertainment and Serious Games, and Engine Software, game developer based in the Netherlands, today announce that they are currently in the process of developing Rummikub® for the Nintendo DS platform. The game is aimed to be released in Q4 of 2008.

Since the 1950s Rummikub® has been an immensely popular family game, played by millions of people all over the world, and being voted“Game of the Year” in over a dozen countries during its existence. Now, Engine Software and GFO are bringing the officially licensed version of the game to the Nintendo DS. Rummikub® for DS will be based on the classic version of the game, and like the original game it will be targeted at the 7+ audience.

Jurriaan van Rijswijk, General Manager at Games Factory Online said:“ When we acquired the official license for this game, we looked for a stable and experienced developer to turn the license into a succesful release for Nintendo DS. With Engine Software we found the ideal partner for this project, and we are quite excited about bringing this product to the market in the near future.“

Games Factory Online and Engine Software will be releasing further information, including screenshots and other media, in the coming period. An exact release date and price point have not yet been confirmed, and will be announced at a later date.

Games Factory Online B.V. produces and publishes games for PC, Consoles and Mobile devices. The company’s head office is based in the Netherlands. More information can be found on www.gamesfactoryonline.com.

Engine Software B.V., based in Doetinchem, The Netherlands, is one of the most experienced independent game development studios specializing in handheld games. Founded in 1995, Engine prides itself in being the oldest active game developer in the Netherlands. Engine Software is currently involved in game development for Nintendo DS, PSP, digiBLAST, PC Casual and WiiWare, and is currently seen as one of the leading developers for handheld platforms.

For further information about Engine Software BV, please visit the website at www.engine-software.com

For further information about Games Factory Online, please visit the website at www.gamesfactoryonline.com