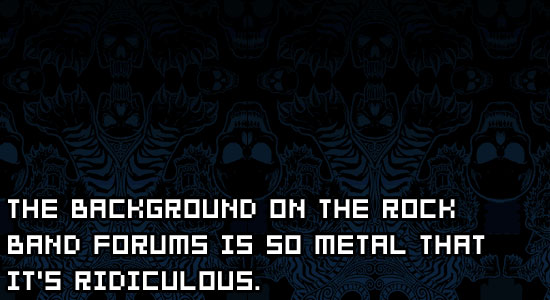 Social networking sites are all the rage, and so is Harmonix’s upcoming Rock Band, so the marriage of the two just makes sense.

Today, the Cambridge, Massachusetts-based company revealed detailed plans for ROCKBAND.com, which will include in-depth leaderboards, personal and band pages, a “Musicians Meeting Musicians” classified space, and more. The Web site will also offer the opportunity to create their own personal blog to yap about their musical tastes and find a date. Or just find others with similar interests. Coming soon will also be a “photo creator,” where virtual bands can take a virtual promotional photos.

Even more exciting is the fact that Rock Band‘s street date as been bumped up to Tuesday, November 20 (the same day this new site is launched); that’s three days earlier than the dreaded “Black Friday” release date that had previously been announced. The PlayStation 2 version of the game is now set for a December 18 street date, which will give gift givers absolutely no time to pick up a copy before having to wrestle grandmothers at Best Buy.

Cambridge, Massachusetts – October 25, 2007 – Harmonix, the leading developer of music-based games, and MTV Games, a division of MTV Networks which is a division of Viacom (NYSE: VIA, VIA.B), along with distribution partner Electronic Arts (NASDAQ: ERTS), revealed today details for the ROCKBAND.com social community website. The site will launch on November 20, alongside the North American release of Rock Band for the PLAYSTATION®3 computer entertainment system and Xbox 360 ™ video game entertainment system from Microsoft®. A PlayStation 2 version of the game will also ship on December 18.

The ROCKBAND.com Web site will incllude in-depth Rock Band™ leaderboards, personal and band home pages, and a “Musicians Meeting Musicians” classified section to help form bands online. The site will also give fans the opportunity to create their own Rocker Profile pages and communicate with other Community members, blogging about their musical tastes and meeting others with similar interests.

“ROCKBAND.com blurs the lines between fantasy and reality, ” said Melissa Macaulay, Producer of ROCKBAND.com, Harmonix. “The site allows you to hype your in-game band’s accomplishments, while providing a forum to meet other real-life people and potential band mates who share your musical tastes.”

Personal & Band Pages: ROCKBAND.com will automatically load your in-game characters and game stats from an online database so your personal profile page will always be up to date. Choose from four genres in the game to customize your profile pages with cool background skins that reflect your rock tastes.

Band Classifieds: Find and create your own band through the ROCKBAND.com Band Classifieds page. Here you can advertise your own rocker skills or search through dozens of rocker profiles to choose band mates who share similar music tastes.

Rock Band Leaderboards: Climb to the top of the charts as a solo artist or band! From band rankings to solo scores, the ROCKBAND.com leaderboards will earn you fame and fortune as you progress on your journey to Rock Band stardom.

Rocker Blogs: Find out what’s happening behind the scenes with your favorite bands through their blogs. Use your blog to communicate with band mates about practice times, meet others with similar musical interests and keep your groupies in the loop with the website’s unique blogs.

Rock Band Forums: Interact with other rockers and music lovers about anything and everything rock!

Photo Creator: (Coming Soon!) Take the ultimate promo band or solo shot with the website’s Photo Creator. Pick a location, the right lighting, and a coordinated (or not!) pose for your band. Take it over the top cheesy or seriously intense. It’s all about your band’s total image.

“We see ROCKBAND.com as a true extension of the Rock Band world. It will be an awesome way to meet new people who have similar musical tastes,” said Josh Randall, Creative Director for Harmonix. “With ROCKBAND.com players will be able to come together and express themselves in a collaborative manner, which is what playing music is all about.”

Harmonix has partnered with the San Francisco creative powerhouse Mekanism to build the social networking site.

“We are designing ROCKBAND.com as an online home for your band, and as a creative platform for living out your rock and roll fantasy”, said Pete Caban, partner at SF-based digital studio Mekanism. “The bands and rockers that you can create in Rock Band are insanely unique, and it’s going to be fascinating to watch this community come to life.”