Everywhere I looked, my peers seemed to be having fun. Mere minutes before, everyone couldn’t stop talking about how cold that Santa Monica rooftop was. It was the opposite of fun. Now, that had melted away, a distant memory that really wasn’t all that distant. It might’ve had something to do with the suddenly functional heat lamps, or it could’ve been the mass of people simultaneously releasing their inner rock star.

In all honesty, it was probably a combination of the two.

Near-hypothermia aside, most everyone looked so excited. Many wanted to hop on one of the two stages (okay, one was just a corner of a room outfitted with monitors) and get their first crack at Harmonix’s Rock Band 4. I imagine their eagerness was two-fold: they wanted to play the game so they could do their job, and a fair number likely hold Rock Band dear in their hearts. So, in pursuit of (at the very least) an opportunity to do the thing they were sent by their editors to do, the outgoing meshed with the timid to form makeshift quartets for three or four minutes at a time. 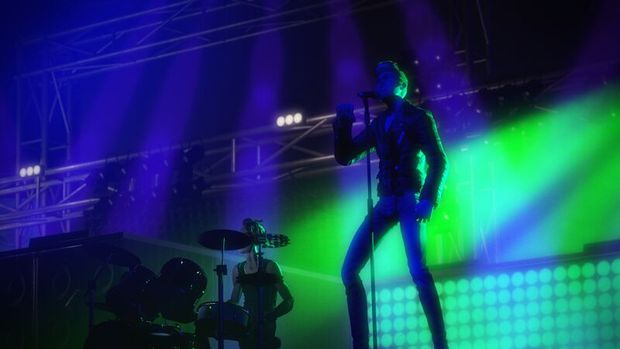 Between those dueling stages was an innocuous, decidedly less interesting room. But, what it lacked in flair, it made up for in substance. Some posted up nearby talking Filipino politics, but those who ventured inside found the biggest change to Rock Band in years. Guitar solos aren’t what they used to be.

Trepidation was abound. Shredding in Rock Band is such a staple. Now it’s different. Accuracy has been replaced with creativity. I couldn’t help but think that’s a musician’s move right there. I also couldn’t help but be a little dejected that there’s less skill involved with the instrument that I spent the most time trying to perfect.

Down the hall, Pearl Jam’s “Alive” started playing, and Eric Pope couldn’t hide his disdain. I thought about firing it up to figure out how these new solos worked. I refrained and chose “Cult of Personality.” In everyone else’s hands, this is a plastic guitar; in my hands, it’s a pipebomb.

Things didn’t pan out quite as I wanted. Rather than rhythmically dissecting the song until the solo hit, I was met with five minutes of solo. That’s a dev mode thing — perks of the preview event. I guess that’s adequate time to figure out the ins and outs of the new format. I was mostly right, but not entirely.

A small group had formed after a few minutes. Someone made a comment about the five buttons on a Rock Band guitar. The timing couldn’t have been more perfect. A Harmonix representative sprung into action to correct the misstatement and pitch the Freestyle Solos — a system that reminded everyone there are ten buttons on these axes.

Intricate notes have been left by the wayside for colorful patterns. Blue means to play in first position (normal notes); orange indicates you need to slide up the neck and play on those five forgotten-about buttons. An algorithm decides exactly what gets played, whether it be sustains, eighth notes, sixteenth notes, or just wildly tapping without any strumming. One of the patterns mandates you just play anything. Make noise, anything works.

While it sounds somewhat insane, it mostly works. The solos come together in a way that’s satisfying — as if you were actually playing the solo. However, substituting that for nailing a classic solo isn’t a trade-off that I necessarily appreciated. It just feels like maybe it’s a bit too easy now. 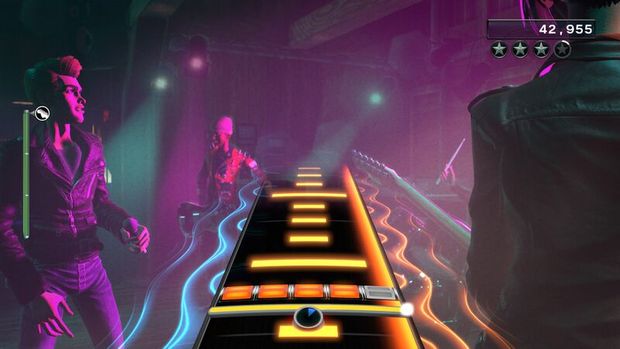 That’s not the only concern. Harmonix has made a point of framing Rock Band 4 as a party game that anyone can pick up and play. But, I saw many of my peers struggling to integrate the solos into the gameplay they already knew. When I asked the devs how long they expected it’d take for casual players to grasp Freestyle Solos, they thought it’d go pretty quick. I estimate it’ll take slightly longer than very casual players want to commit. In that event, the mode can be turned off, which seems like a less than optimal solution.

For those who have the patience to learn it but aren’t dedicated enough to excel at the old solos, Freestyle may be a fine compromise. Wailing on those solos makes you feel really good even when you’re performing a relatively simple task. It makes for a nice little illusion for anyone who doesn’t want to look past it.