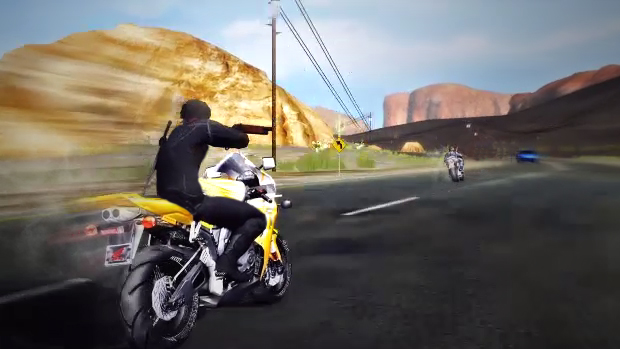 Get those chains ready

It’s been a long time since there was a Road Rash sequel, but Road Redemption may take away the ache of waiting. Composed of a team with 35 years of combined experience and in production since 2009, Road Redemption is a homage to the motorcycle-combat series that many of us loved in the ’90s. With most of production done, developer DarkSeas Games is asking for $160,000 on Kickstarter to polish and distribute the game on consoles.

DarkSeas hopes to evolve the Road Rash concept with firearms, multiplayer, and 6+ mission types (with more that may come from the community). The project is designed in part by Adam Grantham, who previously worked on the rather bland PlayStation Move title Sorcery. Road Redemption is built on Unity 4 and will release July 2014, free of DRM and microtransactions.

I love Road Rash and have wanted a proper follow-up for over a decade. There have been rumors of reboot attempts throughout the years, but DarkSeas seems to have made some progress with a title that actually exists before the public. It’s been too long since I’ve whipped someone off a bike with a chain.