Let’s croak us some toads…

The noble bard told us “Uneasy lies the head that wears a crown” and nobody knows this better than Redgi of the Crimson Fort. Having only been King nary a minute, Redgi already lies, broken and alone, under the blood and mud-stained bodies of his own people. His father slain, his kingdom in aflame, his family missing, and his people in panic. The Frog Clan had made their presence felt, effectively and with callous disregard for the life of the innocent. It certainly is the most ignoble of starts to Redgi’s reign, but while the scaly marauders surely brought unheard catastrophe to the Rat Kingdom, they made one mistake, they left our young king’s heart still beating…

So begins Tails of Iron, a brand new action-RPG from indie outfit Odd Bug Studios. Inspired by fantasy fiction of yesteryear and pad-snappingly tough examples from the “Souls-like” genre, the British developer’s new release — only its second video game to date — hopes to capture the same murky worlds, engaging characters, and tense, hyper-combative gameplay of its contemporaries, transitioned to an anthropomorphic storybook universe. With a beady-eyed cast of characters both stylized and named after the team’s own, dearly departed rodent pals, the furry friends get to live again in this somber-looking, yet strangely beguiling, fantasy adventure.

So cut yourself a chunk of the finest cheese (not my writing) and let’s take a look at this regal rodent saga. 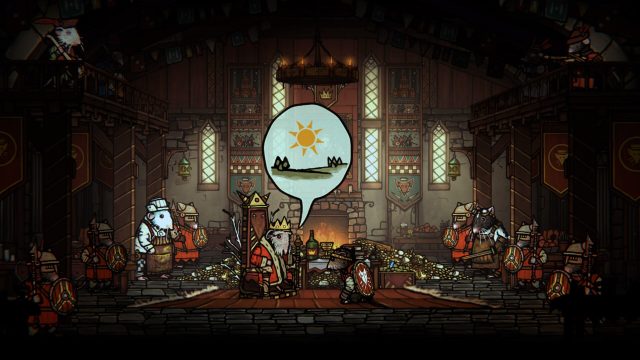 Tails of Iron establishes its mood in its earliest minutes. While no one would deny the inherent cuteness of its rodent cast and their lovely little kingdom; violence, death, and destruction are swiftly visited upon young prince Redgi and his people — the merciless Frog Clan striking fast and hard while the city has its guard down. It soon becomes apparent that for all of its adorability and quaint storybook appearance, Tails of Iron will adhere to the dark, medieval tone of its older, Souls-like brethren. In more ways than one.

Now a king without a kingdom, it is the player’s task to guide Redgi on a perilous quest to rescue his abducted brothers, rebuild and rehouse his fallen people and, finally, tread the grim, well-worn path of vengeance to the lair of the Frog Clan and its disgusting leader, Greenwart. Our story is told without dialogue, our friends and allies conversing in pictograms and sparse musical notes, much like the rodents of ’70s children’s show The Clangers. We aren’t wholly without context, as the dulcet tones of Geralt of Rivia himself, Doug Cockle, narrates the unfolding story, provide guidance for the player’s actions, and adding some rare, but welcome, moments of dry humor.

This is all in fitting with Tails of Iron‘s clear olde wurlde influence, further reflected in its illustrative and striking visuals — like a decades-old picture book sprung magically to life. Redgi’s kingdom is awash in murky Grimm stylings, with parallax scrolling and puppetry-style animation adding depth and personality to our cast and their world. The narrative itself is interesting enough, though a solid opening act gives way to some oddly eventless padding in the middle. The story picks itself up for an interesting, even surprising, final third, culminating in a thrilling climax.

For all of the spirited and fist-pumping pomp of Tails of Iron‘s opening, a chunk of its story is surprisingly dry — featuring a lot of back-and-forthing against insect-ridden sewers as our noble regent performs jobber fetch quests, our lust for revenge craving him to start dismantling Greenwart’s slimy army, Yojimbo-style. For a king at war, Redgi sure seems to do most of the kingdom’s “busy work”, a strange story choice that even the narration itself calls out.

Still, the tail… erm… tale does find its feet. The opening and closing thirds of the adventure are very satisfying.

Redgi’s quest blends area-based exploration with the challenging and deliberate combat of a Souls title. Redgi starts out with a humble sword and shield, recovering and/or crafting new weapons — along with armor, helmets, and even ranged tools — as his journey continues. These death-dealing artifacts have distinct stats, offering better or lesser effect against varying species of enemy. Weight is also a factor. You can be the rat equivalent of Juggernaut for all I care, but it doesn’t mean cheese if you can’t dart out of the way of impending danger.

Every fight, from the smallest bug to the biggest of wartoads, is a potential “Game Over” situation, as signified by that now genre-standard statement: “You Died”. Players must exercise timing, patience and deft agility to win each battle, utilizing the best tools for the job, recognizing the opponent’s attack “tells”, and ensuring that they are not too encumbered to get the hell outta the way when stabby sticks approach their whiskers. Drop the opponent’s health far enough, and Redgi can end the furor with a face-caving execution. That, my friends, is gonna leave a mark.

It must be noted that those turned off by the difficulty of the FromSoft catalog might find themselves right at home with Tails of Iron. While undoubtedly challenging, this particular take on the genre is firm but fair, and most anyone with an ounce of patience and an eye for preparation will hold their own in battle. In fact, Tails of Iron makes an ideal entry point to the notoriously difficult genre — its 2D plane and simple inventory stripping back on the complicated movement mechanics (not to mention the abhorrent camerawork) that can haunt other titles.

Tails of Iron provides a perfect place for newcomers to cut their teeth, while still offering satisfying and engaging combat to battle-hardened warriors. Personally, I feel that, if anything, Tails of Iron lowers its guard a little too much as it progresses, becoming a bit over-generous with its head-cleaving axes, spears, and broadswords. Still, combat remains difficult, (and occasionally painful), but never frustrating — an important sweet spot for beginners and veterans alike. 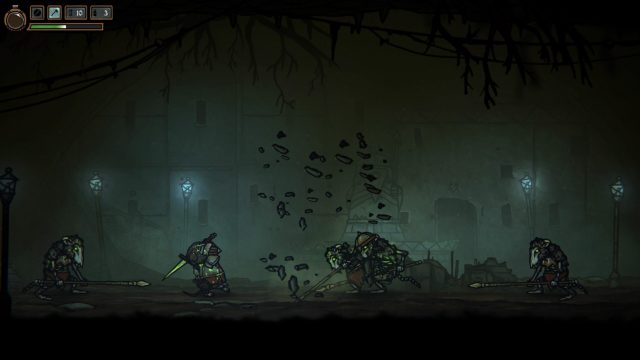 While Tails of Iron has few failings of note, there are limitations, (perhaps budget-based), that cast a shadow over the RPGs full potential. While the kingdom is pretty vast, and Odd Bug Studio has done well to create distinctly different locations, (with a latter-hour locale being a particular standout), a lot of the missions are very samey, often revolving around traveling to an area to perform a quick bout of the aforementioned bug extermination. I think there’s much more to be explored in the story of Regdi’s impending battle against his amphibious enemies.

After a strong opening, we’re missing missions where our furry hero stealths into a camp to steal plans, or perhaps intercepts a weapon delivery, destroys a guard post, or some other Art of War chicanery. While the rebuilding of the Crimson Fort and the final surge are gratifying, quests to clean out basements of beetles, find a cookbook, or construct a beehive are a touch anti-climactic given the apocalyptic events of Redgi’s week. Regardless, Tails of Iron holds firmly to its unrushed and sure pace, paying off during the back half of its 8-10 hour quest… longer still if ye keep dying.

To introduce a new world and its characters is no easy feat for any video game, but Tails of Iron succeeds, despite any aforementioned motivational shortcomings. Importantly, the story definitely left me wanting more, and I only hope that this release finds deserved success, and we revisit the Rat Kingdom again in the future. There is so much scope and possibility within this universe, and Tails of Iron is an ideal prologue to further epic tales of Rats And The Frogs Who Hate Them. 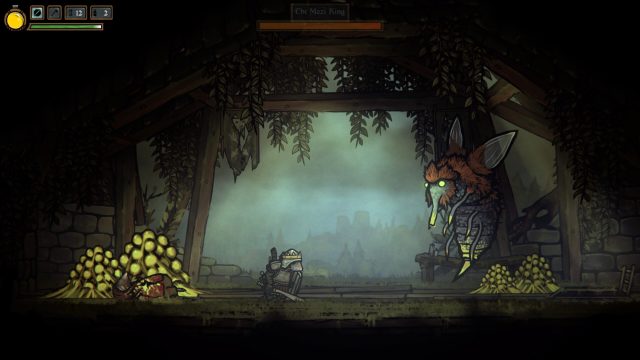 2021 has seen many brilliant indie releases, and Tails of Iron absolutely deserves to stand among them. Odd Bug Studios’ grim-yet-charming fable of bravery and brotherhood is a passionately made tribute to both classic storytelling and the challenging efforts of games of yore. Importantly, the very heart of its developer is up there on-screen, pumping the blood of the Rat Kingdom’s enchanting world, empathetic heroes, and dastardly villains. If you’re yet to jump into “Souls-likes” and want a place to start, or if you’re a Souls veteran who just fancies a more unique take on the gloomy, unforgiving genre, then you can’t go wrong with this walk on the particularly wild side.

With its tough-but-fair combat, timeless storybook visuals, and unique furry fantasy, Tails of Iron is one of the year’s most distinctive RPG experiences. The intentionally subdued pace and challenging nature will definitely test the impatient, but anyone looking for a knuckle-cracking slugger, powered by a tale of valor and vengeance, will find Odd Bug Studio’s sophomore effort washes down like a fine flask of Bug Juice. Rest well, Redgi, your friends have done your memory proud.