Time is Running Out.

Somewhere, in another time and another place, armageddon looms. An insatiable black hole — The Ultravoid — is ripping the galaxy apart, mercilessly swallowing up entire stars, planets, and civilizations. As it bears down on its next victim, the government seems incapable of reaching an agreement on what is to be done, poised at the complete obliteration of their homeworld. Taking matters into their own hands are the Voidrunners, a fearless and talented squad of adventurers, scientists, and technicians, whose mastery of both time and space stands as the one hope for the planet, and perhaps the rest of the galaxy. Something, however, has gone terribly wrong.

In the midst of a do-or-die operation to activate the Starseed, a powerful device that can destroy the Ultravoid from within, the Voidunners journey has become a calamity. Battered, broken, and alone, one Voidrunner seemingly remains, perched on the void’s event horizon. Her team missing, her communications lost, and with the plan now a catastrophe, it is up to this final courageous traveler to explore the Ultravoid, find her companions, activate the Starseed and, hopefully, return home from the brink of oblivion.

This is the story of Solar Ash, the highly anticipated second release from indie developer Heart Machine. Skating in the wake of the 2016 smash hit Hyper Light Drifter, Solar Ash hopes to capture the same phantasmagorical wonder of that neon-electric sci-fi adventure, similarly awash with mood, abstraction, and otherworldly intrigue. On occasion, video game reviews can be pretty daunting. This occurs when a title comes from a beloved developer, is an anticipated sequel/follow-up, or is a deliberate title likely to appeal only to a niche corner of the gaming community. Here in Solar Ash, we essentially have all three, which makes a tough task of accounting whether you, personally, should part with $35 to play it. Those who skip to the arbitrary number tallied at the end of this feature will miss the context of the review, and in a game as inevitably polarizing as Solar Ash, context counts for everything.

A tranquil yet unsettling third-person adventure, Solar Ash puts the player in the finely tuned bodysuit of Rei, our sole protagonist and the last remaining Voidrunner of a failed response mission. We guide Rei on her journey through the Ultravoid: a huge, three-dimensional open-world built of the planets, cities, and communities that it has consumed, all folded up on top of one another. As Rei speedskates her way through this stunning tableau of death and destruction, she will learn about those who have come before, the fates of her companions, and ultimately the source of the Ultravoid itself. Rei is the last person capable of activating the Starseed and ending the cataclysm — a terrifying responsibility for our hero.

It should be noted, first and foremost, that exploration and traversal are the key elements of Solar Ash. Combat and action are relatively sparse. Waypoint finding, efficient movement, precise acrobatics, and good, old-fashioned nosing around are the core elements of this adventure. Rei must pick her way through a string of sectors set within the Ultravoid, eradicating a gross, sentient, tar-like matter and locating various A.I. checkpoints in order to ultimately activate the Starseed. After cleansing each locale, Rei will be confronted by a terrifying “Anomaly” — gargantuan guardians who must be mounted and destroyed in true David vs. Goliath warfare, (Shadow of the what?) Once a location has been cleared of all Remnant activity, a little more power is restored to the Starseed, the next sector opens, and Rei’s quest continues.

While comparison is often regarded as a no-no in reviews, it is almost impossible not to make immediate collation to Ubisoft’s divisive 2008 release Prince of Persia. Much like that title, Solar Ash tasks the player with navigating wide-open spaces, climbing to dizzying heights, cleansing an area of a form of “corruption” and engaging in an occasional boss battle, all within a serene-but-doomed landscape. The similarities between the two titles are readily apparent, from the quiet, dream-like atmosphere; to the simple, rudimentary combat; and (happily) the innate satisfaction of accessing areas that once seemed beyond your reach.

To put it even more simply: the crux of Solar Ash‘s gameplay loop is “See that place? How are you gonna get there?” Heed well that this is the core component of this casually paced adventure. Save for the Anomaly battles and some slight conversations, Rei spends most of her time dashing, climbing, leaping, and grinding. Oh, and falling… Lots of falling. 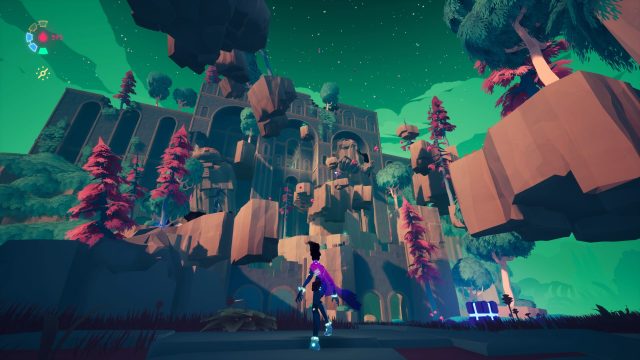 Like so many third-person platformers, Solar Ash‘s traversal can be both a thing of beauty and the stuff of nightmares. While the world is designed in such a way as to lead the player to water, so to speak, it can be easy to get lost en route to your goals, to lose track of your orientation, or to simply slip from a great height and find yourself at the bottom of a tower you were hacking at for some time. Thankfully, Solar Ash is relatively forgiving with sticking the landing, and will latch our girl onto rails, platforms, and the like with ease. For the most part, traversal through the Ultravoid is exhilarating, though there’s no denying that more than a few deep sighs might exhale from your lips after a tumble.

While this all sounds fairly positive, Solar Ash, unfortunately, carries with it some critically disengaging flaws. Due to the game’s theme of isolation, plus the abstract nature of the world’s design, the Ultravoid can feel exceptionally empty. Not necessarily “lonely”, but empty in regards to engagement, direction, and motivation. One of her only forms of communication, Rei stumbles across written journals of both her fellow Voidrunners and the black hole’s victims. Elements such as these feel anachronistic to the title’s interstellar “new world” design. Solar Ash often feels like a world in search of a game to occupy it, and while it is an undeniably attractive adventure, there is something incredibly “thin” about the whole affair, a pervading sense of unrealized promise that haunts the experience.

Take the Anomaly battles, for example. These encounters are visually splendid, cinematic, even emotional affairs. Rei scurries across fantastical, sometimes frightening creatures, attacking a series of weak spots in order to take down the mighty guardian. As you can see from the screenshots, these are stunning, epic sequences. But to play, they’re rote, clunky, and frustrating affairs, set to strict time limits that will see Rei thrown back to square one if she fails to chain her hits accurately. The linear and mechanical engagement of the battle doesn’t align with its cinematic spectacle, resulting in fights that often come off feeling more like wars of attrition, rather than satisfying, skill-based victories. 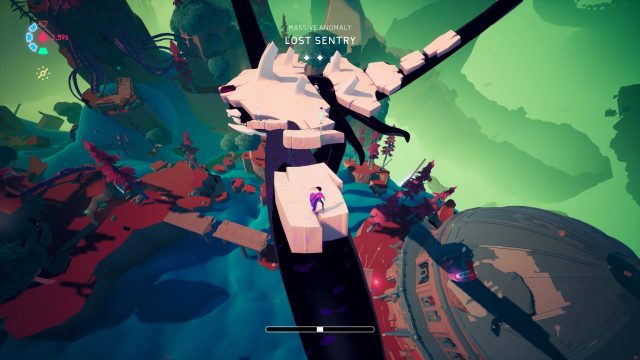 Solar Ash dares to be repetitive by design. A tactic that can and has worked for many titles in the past. Rei finds a zone, cleans out the Remnants, defeats an Anomaly, activates a Starseed node, then moves to a new area to do it all over again. As you may have guessed Solar Ash is, ultimately, a game for explorers and wanderers. You are playing to search nooks and crannies, you are playing to navigate the highest heights and subterranean depths, you are playing to locate hidden logs and uncover suit upgrades. If you’re choosing to play for the story, for the action, or for genre evolution, then you’re likely to be disappointed. This is, foremost, a game of orienteering. Purely in that regard, it’s a positive experience.

Of course, it would be remiss not to focus on two of the title’s best elements, the first being its exquisite stylized design. Solar Ash is an attractive, occasionally dazzling game, featuring vivid effects; surreal, inviting landscapes; and eye-popping colors — Heart Machine once again dives into its favorite palette of pink, magenta, violet, and turquoise. Fans of Hyper Light Drifter will feel right at home with the Ultravoid’s converse blend of high-energy neon visuals and grim, nightmarish monsters. An equally emotive score also offers Rei sole companionship as she trips the light fantastic.

And speaking of Rei, she deserves a special mention herself. In a quiet world of death, destruction, and utter isolation, our protagonist shines brightly. Our faceless hero is infused with courage, vulnerability, selflessness, and even a little joy and humor, complementing her cool visual design and slick ‘n’ silky animation. Though her future looks distinctly dire, Rei’s bravery and spirit glow as she skates through the Ultravoid — a ray of hope in Solar Ash‘s foreboding world. 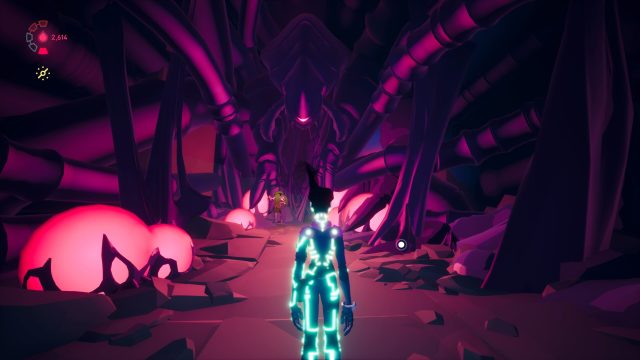 In modern game critique, “above average” translates as “bad”. And this attitude will not serve Solar Ash truthfully. Far from being bad, Solar Ash is simply fine, albeit a game that requires both patience and a penchant for exploration in order to be truly appreciated. With its “Difficult Second Album”, Heart Machine has definitely created a title that offers more conceptually than it successfully delivers, resulting in a mid-tier adventure boosted by arresting style. I had hopes that Solar Ash would be something very special and, unfortunately, it doesn’t meet those hopes. But what we do get here remains at least very agreeable, and that’s fine.

Solar Ash offers a collection of promising concepts that don’t quite hit realization. While undoubtedly a visually striking experience, Rei’s journey into the Ultravoid suffers due to a disengaging narrative and repetitious gameplay. Solar Ash’s attractive world struggles to provide the player with captivating experiences. The elements do occasionally come together, however, ensuring that while Solar Ash isn’t quite the adventure it might have been, it successfully retains unmistakable Heart Machine charm.