I’ve been reading Destructoid for roughly six years now. I can’t remember the first article that I read, but I certainly know the first article that made this my home for video gaming news. It was the review for Nine Hours, Nine Persons, Nine Doors. I’d never considered a visual novel as a form of entertainment I would enjoy prior to that, but the passion in the words on the page pushed me to drop $35 and pick up the game (which at the time became difficult to find).

For the next six days, I forced my eyes to stay open through the early morning hours as I became completely enthralled in the story. It was a masterpiece and easily one of the best games I’d ever played. The decision to click that link changed my history, forging a path where I now write for the website that opened my eyes to a new world of gaming. That decision, theoretically, could have created two different timelines and different versions myself.

I don’t know what that other universe holds for that CJ, but this one is clearly superior because it allowed me to experience a game as satisfying as Zero Time Dilemma. 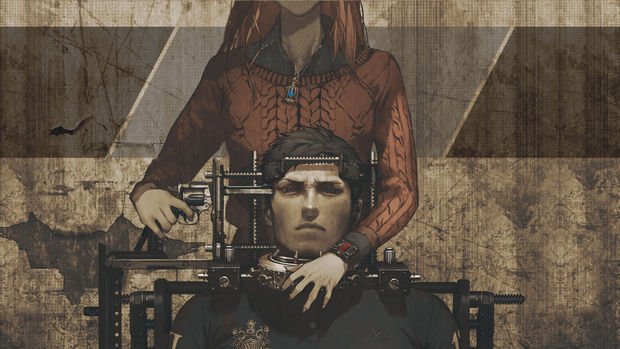 As promised at the end of VLR, Zero Time Dilemma takes place in 2028 in the Nevada desert. As we learned in the last game, this is ground zero for the outbreak of Radical-6 and you’re being sent in to investigate what happened and prevent the Red Earth. While the first two minutes or so are in the Mars colony, the bulk of the story takes place in a secret underground facility. Zero — er, the second Zero, has kidnapped the nine people in the experiment, forcing them to take part in The Decision Game.

You’ll notice I didn’t say The Nonary Game just now, and that’s because, in one of the major shifts for the franchise, you won’t be playing it. Instead, the colony subjects are split into three teams, and you’ll take control of each of them as you try to unravel the many, many mysteries this game holds. One group features newcomer Carlos, the whitest and blondest man ever to be named Carlos. He is joined by Akane and Junpei from 999. Another has VLR‘s Sigma and Phi teaming up with Diana, who fills the role of girl-who-just-wants-everyone-to-get-along. Finally, the third team is made of all new people, including Q, busty Mira, and the awkward Eric.

The cast here is quite the departure from the past in that all of the characters are like normal, everyday people. There’s no circus ringmasters or belly-dancing computer programmers. Instead, you have a collection of average people who you find out are anything but average. How quickly you find this out, is entirely up to you.

Zero Time Dilemma takes the timeline jumping mechanic from the last game and turns it to 11. Now, you no longer follow set paths of a story. Instead, you’ll spend the roughly 20-hour campaign jumping from moment to moment across a variety of alternate timelines. It was all a bit disorienting at first and I worried it would hinder my ability to enjoy and fully understand the story. But then I found it — the thread that tied together each and every scene and scenario I’ve experienced. Suddenly it all made sense, and the puzzles pieces started to fall into place.

I can’t compliment the writing enough. It does away with the over-explaining of the last game, instead providing players with dialog that is succinct, on point, and sprinkled with the right amount of comedic quips to break-up the otherwise brutal story. The plot runs the gamut of themes, from suspense to science fiction and mystery. There’s even a bit of romance and melodrama here, neither of which feel out of place as they perfectly complement the absolute horror of The Decision Game. 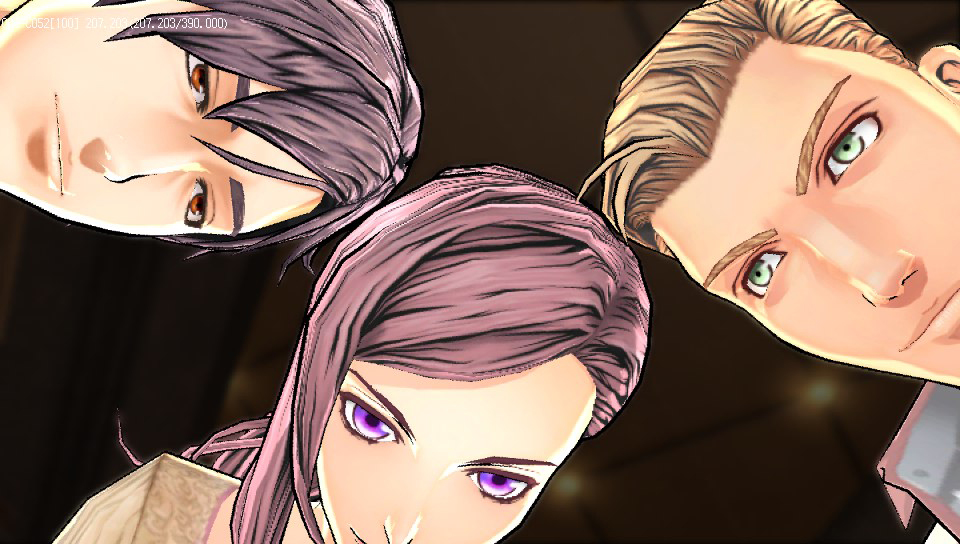 Trust me when I say things escalate quickly, and go south so fast. The overall goal is to escape the bunker, but the only way to do that is to collect six passwords needed to open the door. Passwords are rewards when another player dies. Throughout the many timelines, you’ll be given the opportunity to kill your competition in The Decision Game. These deaths don’t hold back, and you’ll be subject to some truly fucked-up shit throughout. I don’t want to give too much away, but hematophobics should probably steer clear.

The Decision Game is the driving force of the story, placing the “escape” segments firmly in the back seat. In all, there are 13 puzzle rooms, each of which leads to another round of The Decision Game. Difficulty-wise, these are some of the easier escape segments in the series. I had trouble with just one obtuse puzzle and was able to get past it by guessing every answer possible. When I finally succeeded, I looked back at the clues and still didn’t know how the hell I was supposed to come up with that solution.

Difficulty aside, the escape segments are still a load of fun and quite diverse. Some test your math and problem-solving skills while others test your memory. I have four pages of notes with scribbled sentences, equations, and guesses I needed to complete everything. Of course, the escapes aren’t the only puzzles you’ll have to unravel if you want to succeed. Mastering the many universes is also required. 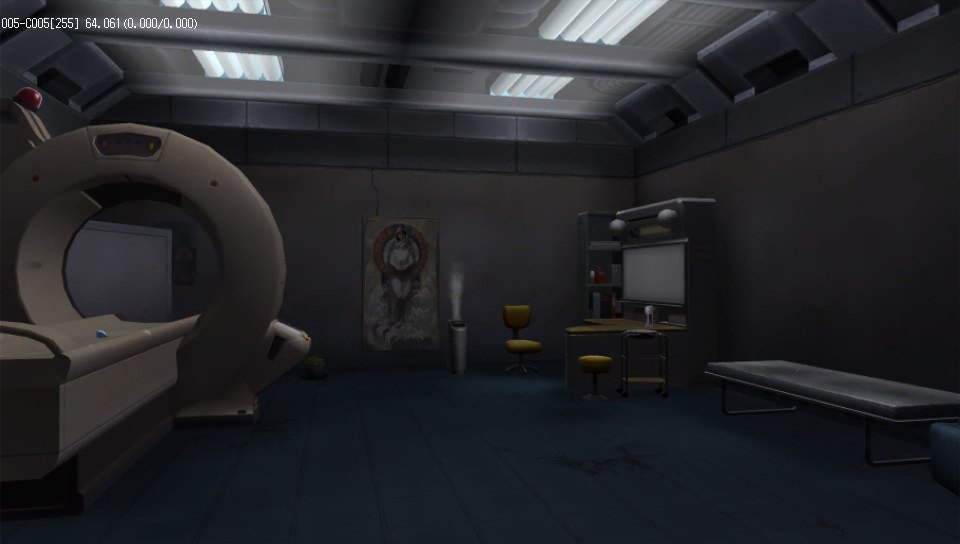 I wish I could end my review right here, but I can’t go without mentioning the abysmal presentation. On the DS, 999‘s story was brought to life with grossly descriptive text and beautiful artwork by Kinu Nishimura. In VLR, we got quality voice acting and 3D character portraits that adequately captured the diversity in each character. This time, it features fully animated cut scenes. None of the characters have stock movements, with just about every raise of the hand or shake of the fist being unique to the situation. I’m not going to beat around the bush here: the animation sucks. It’s 2016, but characters move like they’re in a Dire Straits video from the 1980s. They’re robotic, slow, unnatural, and in the early hours of the game, incredibly distracting. Their faces aren’t any better. Characters lack facial movements that accurately reflect the emotion of the perfectly acceptable voice acting.

Compounding this issue is the awful camera direction of these story segments. The camera is always moving, with slow pans, slower zooming shots, and awkward extreme close-ups. More rare than a shot that isn’t moving is finding one that’s not at a Dutch Angle. You would think the bunker is built on a slope given how many tilted shots there are. 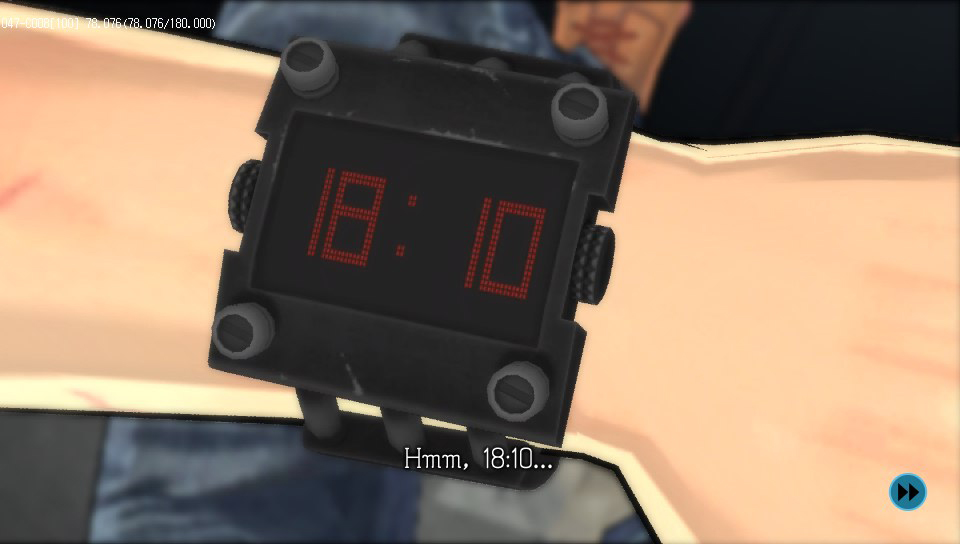 Eventually, the poor direction of the story segments stopped bothering me. Not because it got any better (because it didn’t), but because the story is so goddamn good. Hands down, Zero Time Dilemma has the best story in the series. It made me laugh, shocked me, sickened me, surprised me, brought a tear to my eye, and taught me to look at Back to the Future in an entirely different light. There are seven endings that “matter,” but in truth, every ending you see is significant. Hell, there’s even a complete secondary story you have to figure out by yourself that adds another layer to the game and the series as a whole. Zero Time Dilemma is nothing short of a flawed masterpiece.

It’s sad to think there may be another universe out there where I never clicked that Destructoid link nearly six years ago. I feel sorry for that CJ because he missed out on one of the greatest experiences I’ve had in my 27 years of video gaming. I encourage everyone else to give Zero Time Dilemma a try — just make sure you play the first two games in the series before you do.