Rebellions are built on multiballs

You wouldn’t believe it now, but there was a time when it was hard to get your hands on any new Star Wars merchandise. A decade-long gap between the release of Return of the Jedi and the re-launching of the brand in the early ’90s, back when the Star Wars brand sat largely unused aside from a few novels here, a terrible tie-in cartoon there.

I grew up in this period. A huge Star Wars fan, absolutely starved for anything that involved lightsabers or Stormtroopers. I used to haunt yard sales and the rinky-dink model train swaps in my town, scavenging for any old action figures, prizing my collection of paint-chipped aliens and skinny Darth Vaders, missing their capes.

I remember the first time I laid eyes on the Star Wars pinball machine. This glorious mess of tubes, ramps, LCD X-Wings, and a chromed-out R2-D2 presiding over the head of the table. It was gorgeous. I must have dropped my body weight worth in quarters into that machine over the years.

Of course, those lean days are long over. Ever since Lucas decided to go back and butcher the original films with the 1997 Special Editions and then buried the franchise in insipid sequels, there hasn’t been a toy shelf in North America without a droid or wookie taking up space. Now that Disney is breathing new life into the franchise and returning it to form, the marketing machine is working overtime. You can get everything from lunch pails to faux-wampa skin rugs for your home.

What does this have to do with Zen Pinball 2: Star Wars Pinball: Rogue One? Well, I’m trying to decide if I’ve just been spoiled and jaded by the wealth of Star Wars tie-ins available today, or if this table is really as dull and uninspired as it seems. 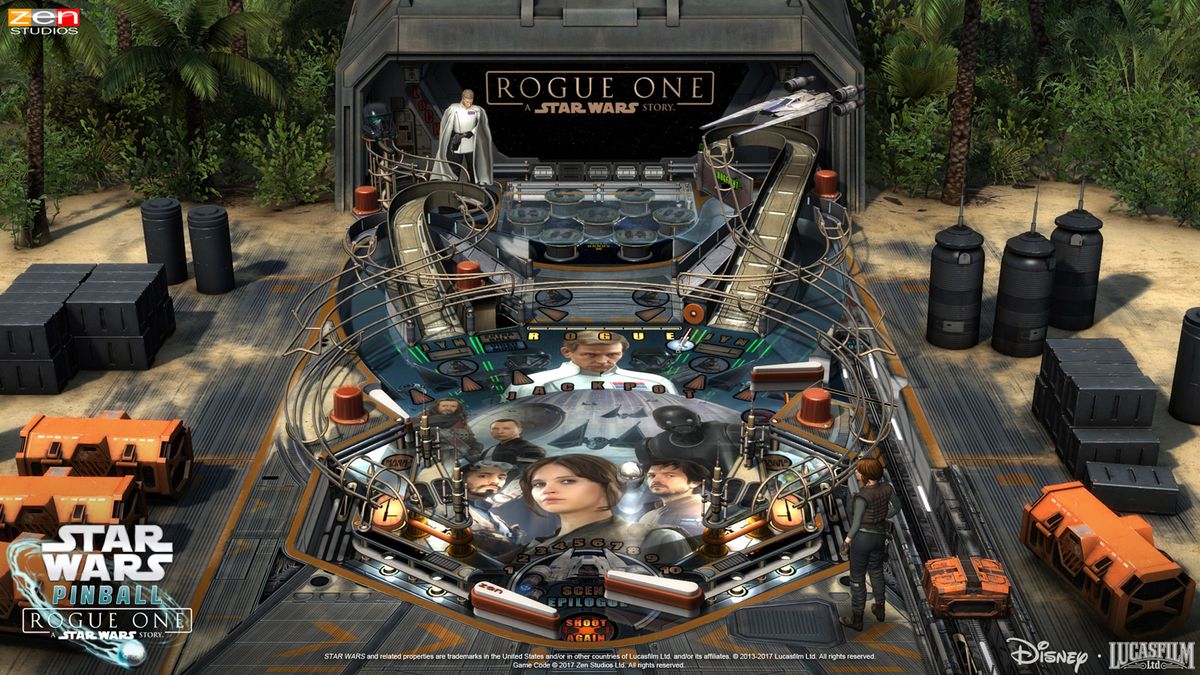 Zen Pinball has been doing its thing for a long time now, so you likely know what to expect with Rogue One. This is another fantasy table that mixes classic pinball design and trappings to fantastic semi-interactive hazards and animated figures. It’s like a real table, but one that comes alive in the middle of play and sometimes allows Stormtroopers to run amok across the playing field.

The problem is, this table can’t seem to decide which end of the spectrum between realism and fantasy it wants to live in. The table itself is not so much a table, but a weird re-imagining of the Scarif beach base area featured in the climax of the film. Docking ramps and cargo crates blend almost seamlessly into the play area creating a slightly surreal effect.

Cool, a crazy, weird, re-telling of the final scene of the movie if all the actors were replaced with silver balls and bumpers, I’m down with that.

But then, Rogue One chickens out and pulls way back on the fantasy elements. Compared to other recent Zen Pinball releases, Rogue One plays it very straight when it comes to mechanics. The table features a few collections of side ramps, a few targets at the top of the table, and a bumper zone in the mid-field that will sink the ball and shoot it out of a pocket a moment later. The fantasy elements are surprisingly restrained, focusing more on sound effects and quotes from the film than anything wild.

That said, the game isn’t totally devoid of outrageous moments. A multiball, for example, is rewarded with a frantic fight against a black-clad Deathtrooper firing lasers in the middle of the table. Jyn will occasionally mix it up with a Stormtrooper, clobbering them with her baton if you hit the right target. Complete enough objectives and the bumper area will recede to reveal a Death Star target zone, or a bust of K-2SO, sending balls flying with a rotating fan.

The trouble is, most of these moments are tied to the progressive story mode. As is now standard in pinball games, the table includes a series of tasks to accomplish that will unlock score bonuses and temporarily change the table as objectives are completed. These goals are also key to achieving a high-score, awarding millions of points in comparison to the trivial 10K or so you get for hitting a ramp. Unfortunately though, Rogue One‘s story mode objectives are somewhat tedious to accomplish. They include tight time constraints, demanding requirements, and tricky unlock conditions.

Unlike other recent Zen tables, there is no way to save your progress on these story objectives between games or complete them out of sequence. Every time you sink your last ball, you’ll be back to square one. So even though there are some legitimately cool sequences to unlock and experience, it’s infuriatingly difficult to make progress towards them.

In a weird way, this frustration is compounded by the fact that the table itself isn’t particularly challenging. It features forgiving side pits, predictable returns, and a lenient middle drain. It’s relatively easy to keep the ball in play and just trade off shots between ramps or send the ball sailing to the middle field where it is reliably dropped and returned through a kick-out. The only difficulty lies in meeting the time requirements on the story mode’s skill shots. This leads to a lot of drawn-out games where it feels like you’re just killing time, keeping the ball in motion until you get a chance to take another shot on the story objectives.

Star Wars Pinball: Rogue One just doesn’t commit far enough in any direction to make an impact. As a Zen fantasy table, it’s a little too restrained to compare to the wild craziness of the recent Bethesda Pinball or Alien vs. Pinball. But, it’s also not straight-laced enough to be enjoyed as a purist experience. The table is probably too easy for serious pinheads to really get into it, but the story mode is too tedious and demanding to be fun for more casual pinball players. It’s a plain scoop of store-brand vanilla ice cream. Perfectly fine, but not likely to thrill anyone.

Star Wars Pinball: Rogue One isn’t a bad pinball game. It still has the same great level of detail we’ve come to expect from a Zen Pinball game, the same great physics, and plenty of great quotes and sound effects from Rogue One to bring out the movie’s personality. But it never proves itself as anything exceptional. For a single-table pack, it just doesn’t have the sizzle you’d hope for.

One thing I will say for it though – when you drain your last ball and you’re asked to input your initials for your score, Riz Ahmed’s character wistfully says “they’re asking for a callsign…” as the three-letter faux-LCD screen blinks.

C’mon. I don’t care how jaded you are by the wealth of Star Wars stuff out there now, that has to bring a smile to your lips.