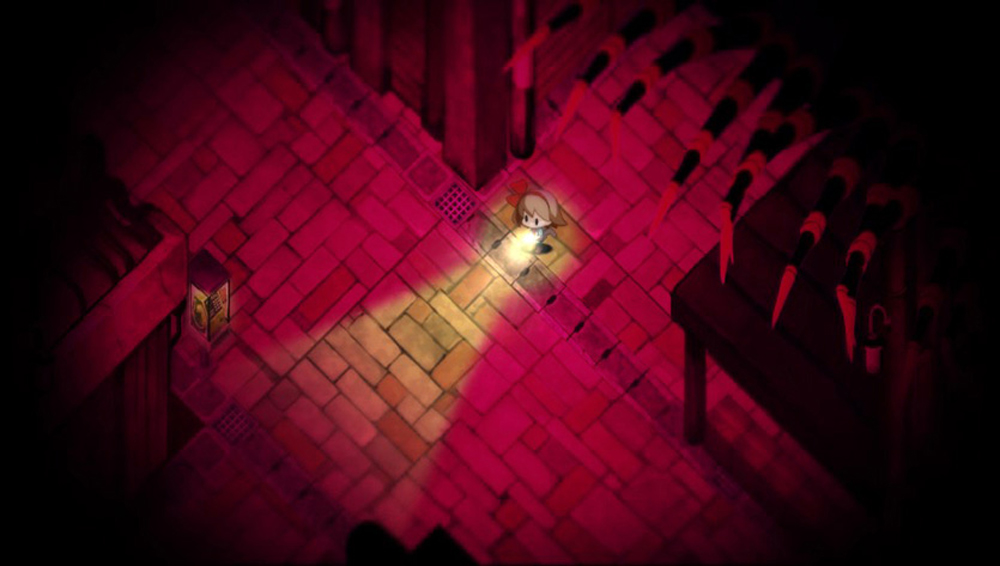 Be still my beating heart

There is only one proper way to play a horror video game, just as there is only one proper way to watch a horror movie: with the lights off. In order for horror to work, you have to invest yourself in it. You have allow yourself to be scared even though you know the images you’re looking at can’t really hurt you. Otherwise, it would be too easy to dismiss it as not scary.

That’s what I did for Yomawari: Night Alone. Huddled up on my bed, I turned the lights out and opened myself up to the terror that awaited me. 20 minutes later I turned those lights right back on because hell no, I ain’t playing this creepy-ass game in the dark. 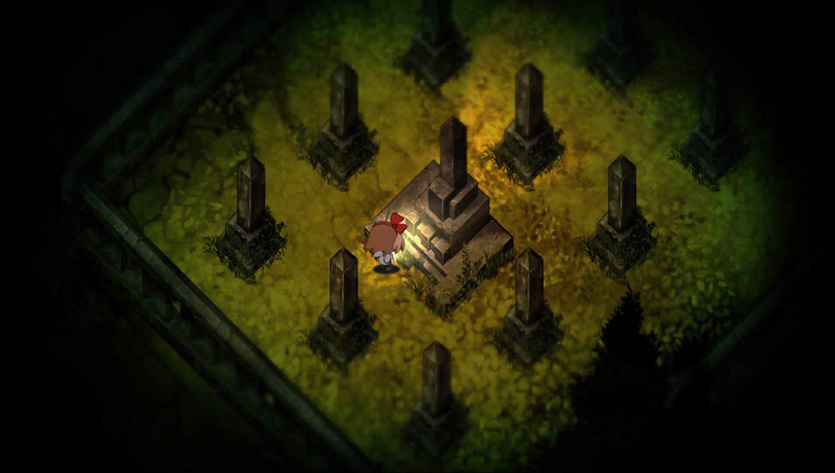 Yomawari: Night Alone made me flinch in the first three minutes of gameplay. As a small girl walking her dog Poro in the middle of the night – like you do – I nearly dropped my Vita when the dog chased after a small rock the girl tossed, only to be hit by a truck. When the picture faded back in, all that remained of the dog was a trail of blood, leading to the edge of the road. Calling out for the pup, the girl runs home to get help from her sister. The older girl leaves the little one alone, and after waiting for far too long, she goes to search for her big sis. When the two reunite, big sis instructs the girl to close her eyes and not to open them no matter what. With her eyelids firmly locked shut, a terrifying sound startles her. When at long last she opens her eyes, her big sister is gone and a waking nightmare is about to begin.

The entirety of Yomawari‘s opening was gripping. Before I knew how the game worked or what monsters were waiting for me in this deserted burg, I proceeded with trepidation, terrified of what would be around the corner. Like the first five minutes of any horror film that’s worth a damn, the beginning of Yomawari sets the mood for what you’ll see over the next two and a half hours or so.

Yomawari is an isometric survival horror experience divided into several chapters. Each chapter has you exploring more of the town as you search for your dog, sister, and solve many of the puzzles that stand between you and the cryptic end of this chilling tale. The town is pretty big, and more of it opens as you proceed, though you are generally pushed in the direction of your main objective. Throughout the streets, back alleys and forest pathways are shiny objects and creatures of the night, most of which can only be seen when exposed to the glow of your flashlight. There is no combat, so when standing face to face with the many horrors that haunt you, your only option is to run and hide.

This isn’t a game that holds your hand. Outside of the brief tutorial, you’re left to figure everything out on your own, which was a breath of fresh air when compared to so many other titles that overexplain everything. There is a minimalist quality about Yomawari that is the smartest choice the developers could have made here. There is little to no score, leaving only the sound of the girl’s footsteps on the ground and her beating heart that grows more intense as creatures approach. There is very little story, just instructions on where to go next, allowing you to view events from the standpoint of this scared, and yet somehow so very brave, little girl. A little girl doomed to die many, many deaths.

Death came quickly for me, and quite often as it’s one-hit kills. When running for your life, the faster her heart beat, the slower she’ll run. This gives you just a few brief moments to figure out how not to die. The blood-red death screen stained my Vita so many times without me ever seeing what hit me. I take responsibility for most of my deaths, literally slapping my forehead when I figured out the key to avoiding a certain enemy, though I can honestly say a few came about due to touchy controls. Many of the objects in the game, either things you pick up or covers you hide behind, have a small area of activation where pressing the correct button will perform the necessary task. I know of a few instances where I died multiple times because I advanced too many pixels past an object I needed to hide behind. 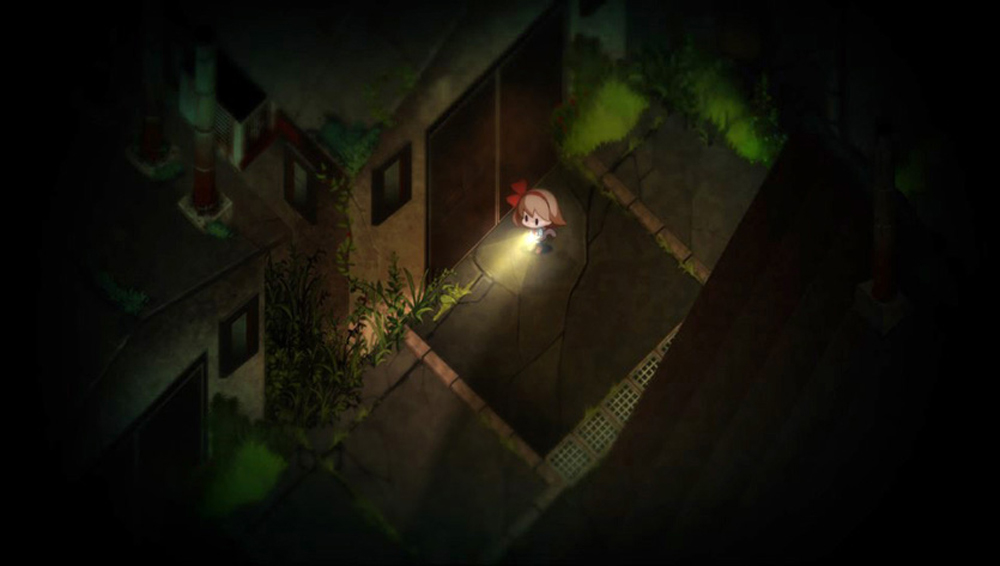 When I did successfully cower behind a rose bush or sign, the camera would zoom in on the little girl as pulsing red lights representing the creatures chasing me would slowly move away. It’s a beautiful choice in art direction, one of the many found here that makes Yomawari one of the best-looking games I’ve played this year. There are no graphical boundaries being pushed, but the magnificent hand-drawn art and inspired enemy design combine to provide an experience that absolutely creeped me out.

Though it arguably became less scary as I neared the end of night, I’ll admit there were moments in this game that truly spooked me. There are jump scares, but not so many where they start to lose their effect. Instead, it was the general feel of the game that kept my arms covered in goosebumps. Eyeballs suddenly appearing on the ground, a ball bouncing by itself in a playground, the sudden passing of a speeding train – there was an overall sense of dread throughout each chapter.

I never knew what I was going to see. Sometimes the creature around the corner wasn’t scary, like when I came across a flaming headless horse that elicited an audible “What the fuck was that?” out of me. Other times I would be walking down a darkened side street only to see a massive monster waiting at the end of it, kicking in my fight-or-flight response. 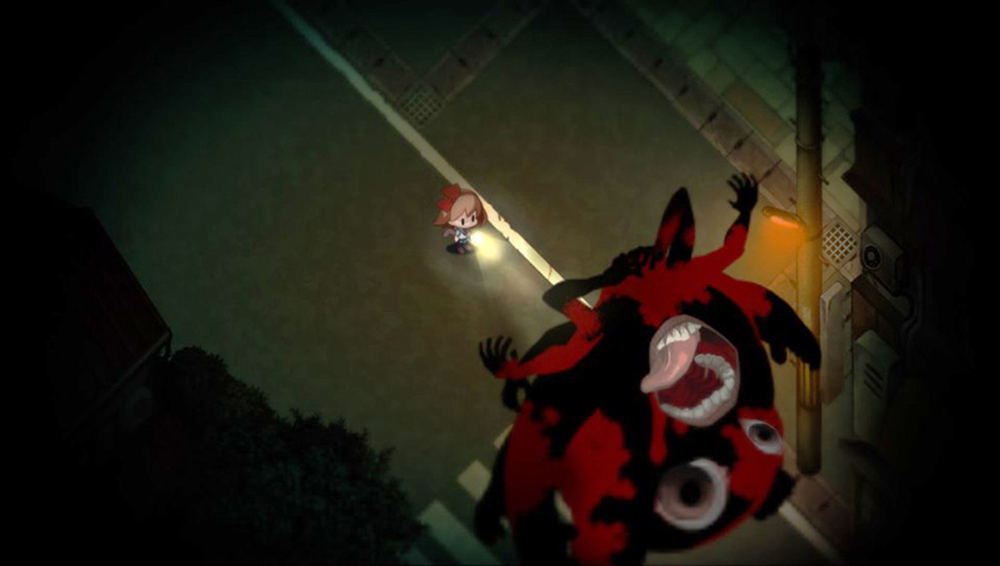 I mentioned the two-and-a-half-hour play time above and I just want to touch on that. I didn’t rush through this game, I just naturally ended up finding my way to the end of most chapters in very little time. I could easily see myself doubling or tripling my play time by going through and thoroughly exploring as much of the town as possible in each chapter because I know I ended the game with many puzzles left unsolved. Had more of these puzzles been mandatory for finishing each chapter, this wouldn’t have been an issue.

I still get chills thinking about my time with Yomawari: Night Alone. Whether it’s a particularly scary moment that pops into my head or one of the many weird visuals that I just can’t get out of my mind, this is a game that’s going to stick with me for a while. I just wish there was more of it for me to remember.