There are some genres that work brilliantly when combined, and others you wouldn’t expect to mash up very well. Yoku’s Island Express blends a Metroid-like action platformer with pinball mechanics, and you’d be forgiven for thinking those are two great tastes that wouldn’t necessarily taste great together, like peanut butter and ham. But the end result melds the two genres better than I ever could have expected. As far as I know, nothing like this has ever been attempted before, but the development team pulled it off beautifully.

Despite the coprophagial tendencies of the hero, this game is very decidedly NOT a steaming pile. On the contrary, it’s one of the most ingenious, original games I’ve played in a long time. 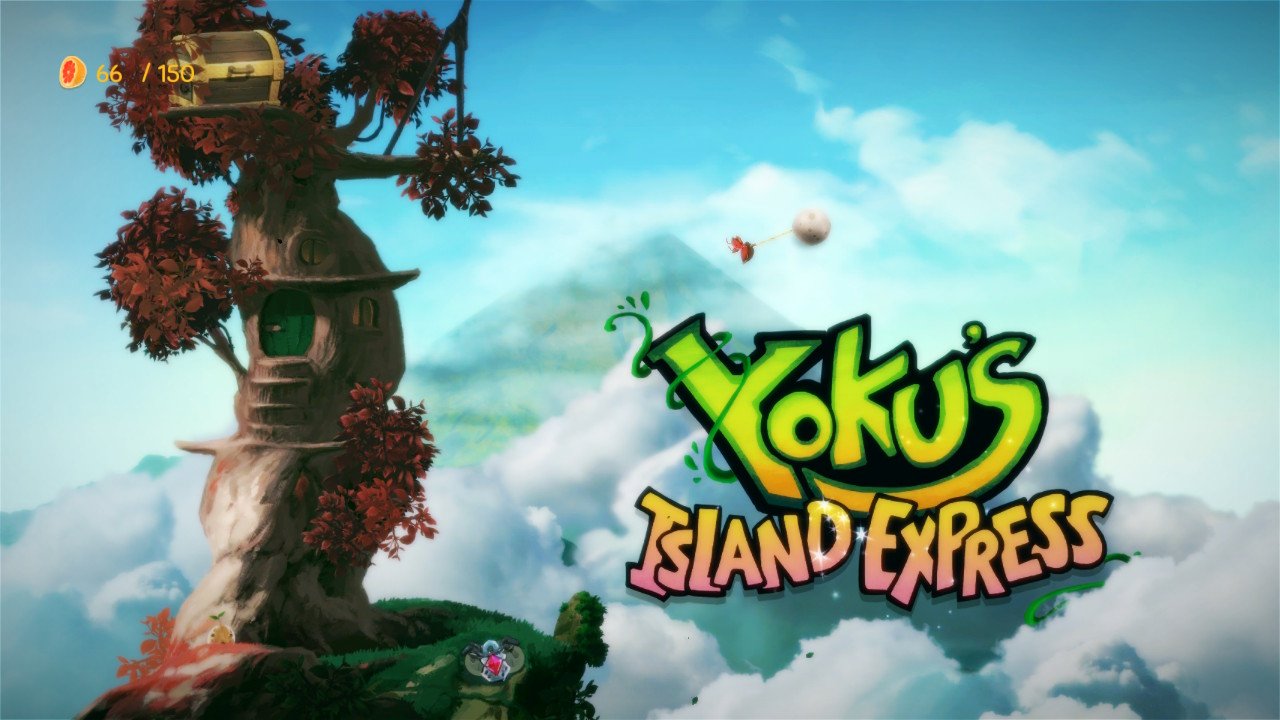 Yoku is a dung beetle who washes up on a small island and is immediately put in charge of the local postal service. When he reaches town, he finds that the laid-back island life he was expecting has been disrupted by someone called the “God Eater,” which has already killed three quarters of the islands’ deities and has designs on the fourth. The only chance to save the island is to find the leaders of three factions and bring them together for a ceremony of healing. And hey, since you’re heading out to deliver mail on your route anyway…

I enjoy the two genres represented here separately, but it’s sort of tough to explain exactly how the end result ends up being so much more than the sum of its parts. I love how seamlessly this game combines exploratory, ability-based action platforming with pinball. There have been a lot of Metroid-style games coming out of the indie scene lately, and I wouldn’t blame anyone for thinking Yoku is just another pretty platformer. But the addition of pinball physics to the platforming is what makes Island Express so distinctive, and such a joy to play.

Yoku’s controls are unique, and the mechanics are what sets this game apart from everything else. The beetle is attached to his ball of whatsit by a short rope, and the two are quite inseparable. Where one goes, so does the other. Yoku can’t jump, and is compelled to push around his sphere whenever it’s not being flung around by some other force. Fortunately, the island is littered with ramps, bumpers, flippers, and lanes that will help him get to where he wants to go. When Yoku pushes his ball onto a yellow or blue bumper, the player can launch the orb using the controller’s shoulder buttons, and the little fellow hangs on for the ride.

It’s pretty interesting having a living ball to control, and you’re probably familiar with the concept if you’ve ever played Sonic Spinball or Metroid Prime Pinball. The pinball physics are above reproach, and some of the “tables” you play on wouldn’t feel out of place in Zen Studios’ catalog. The game is quite forgiving, so even those who aren’t well-versed in the silver ball can succeed through persistence; there’s no time limit, and you only lose a few of the island’s plentiful fruit pickups if you fall into a gutter. 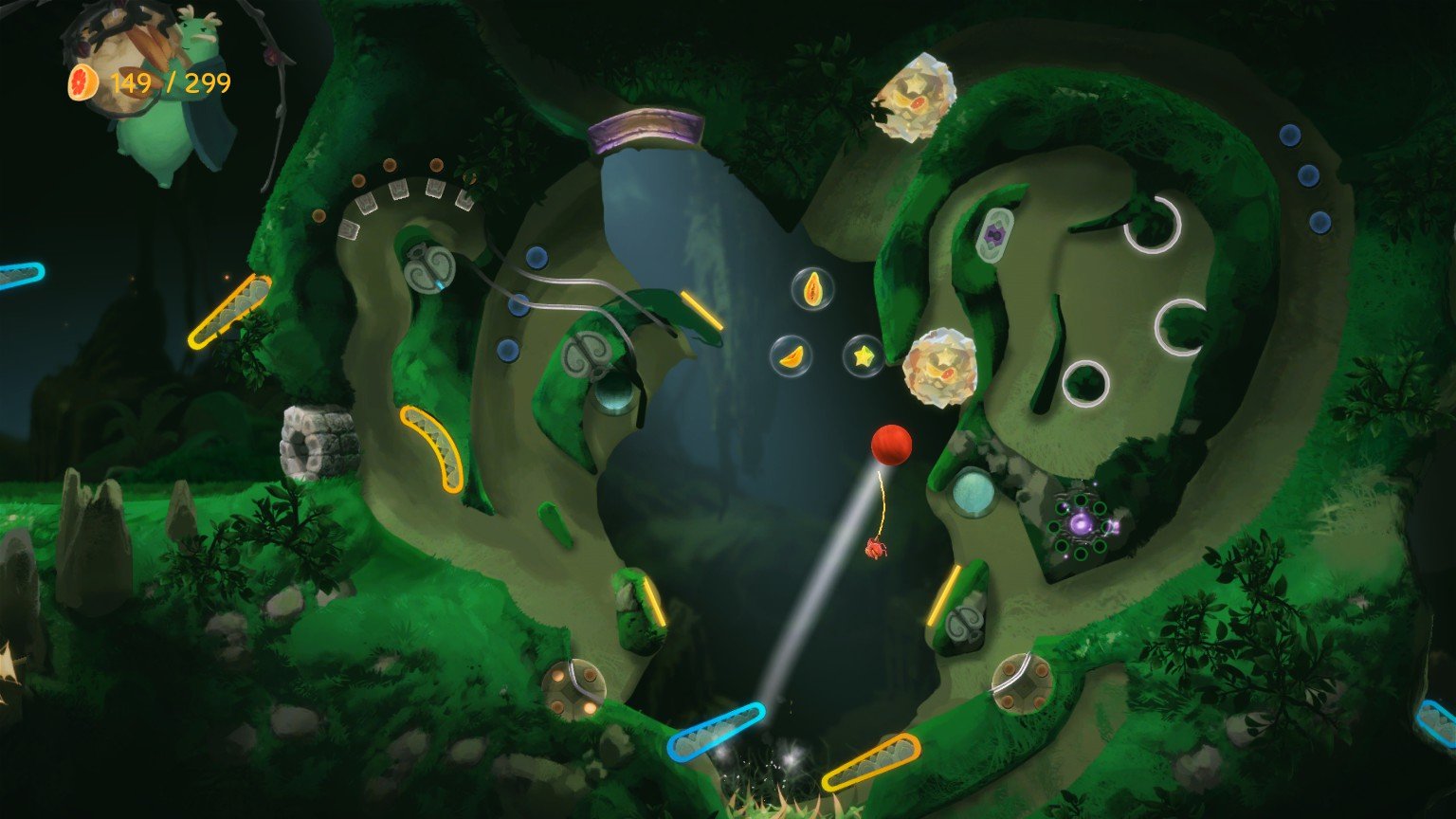 Those fruit come as a reward for doing well in the pinball sections, and can also be found in the wild, or earned for completing quest objectives. Yoku can spend the fruit to unlock additional bumpers, which usually provide alternate travel paths or open the way to new sections of the map. Some NPCs may also offer useful items for sale, if Yoku can gather enough fruit for them.

Even though the pinball physics take center stage, the world Yoku explores has plenty to see and do. Lush 2.5D graphics show off everything from a steamy jungle to a snowy, windswept mountaintop, and there’s tons of hidden stuff for completionists to collect. The island’s inhabitants all have plenty of personality too, and you’ll meet lots of weird characters like exploding slugs, astronaut frogs, and a cordyceps mushroom who wants you to spread its spores as far as you can. Along the way you’ll also learn some new abilities, which will help you explore the island more thoroughly. 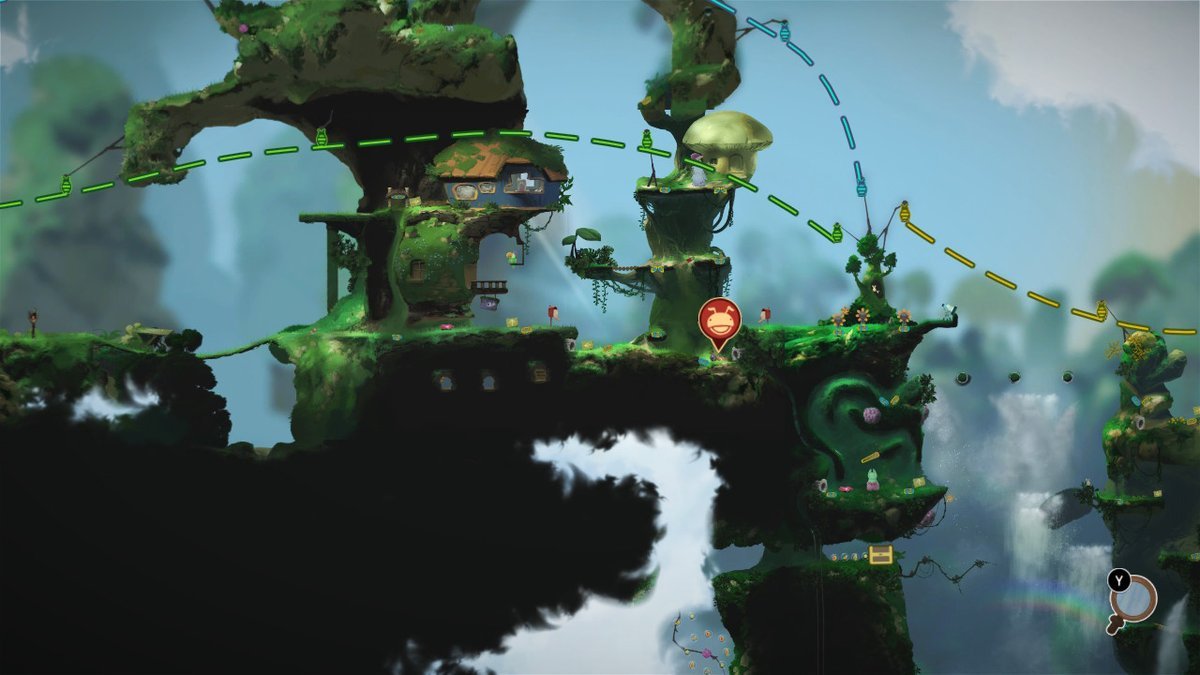 There are many optional sidequests Yoku can undertake as he explores the island, everything from delivering mail to helping a god’s egg hatch. Many of these quests reward him with upgrades to his wallet, allowing him to carry more fruit. Others may allow him to change the appearance of his ball or slightly upgrade some of his movement abilities. Some of the island’s inhabitants will even want to see a specific decoration on your ball and will reward you if you show them the correct design.

One section I encountered fairly early on warns that you can only attempt it once. To my surprise, this was no exaggeration, and I was locked out permanently after falling through the bottom. I’m not mad though, and it’ll give me an excuse to start up a second playthrough. I’m also curious to know what will happen if I manage to reach the secret cave which keeps track of how many times Yoku has fallen with as low a score as possible. You don’t usually think of Metroid-style games as having a ton of replay value once you’ve found everything, but I must admit I am intrigued. (Edit: I was mistaken, and this section can be accessed later via an alternate path.) 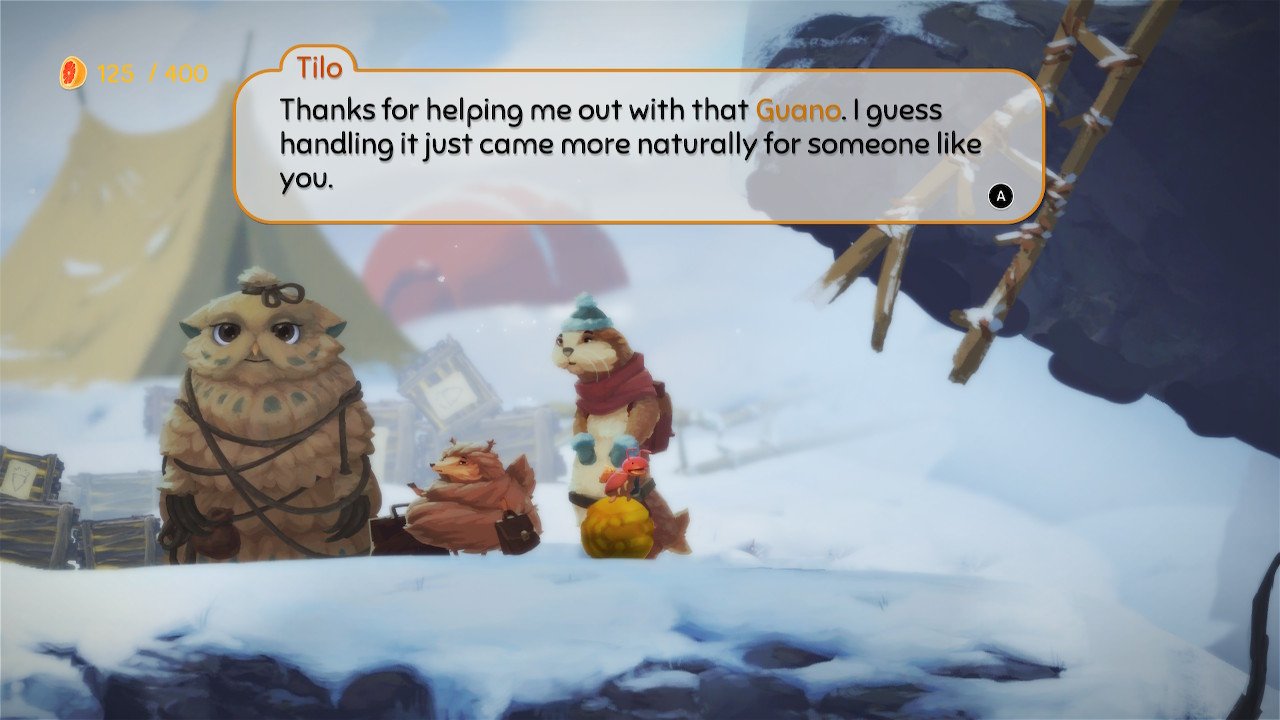 By now it’s probably clear that I enjoyed the hell out of this game, but I recognize it may not be as much fun for everyone. Even though the tables are very forgiving, pinball takes some skill, and repeatedly missing a shot can become frustrating. You’ll need to understand the timing of your shots and the ball’s trajectory as it leaves your flippers to make much progress. During exploration, even though there’s a pretty good fast-travel system in place, backtracking is something you’ll end up doing rather frequently. Most pinball tables can be bypassed if you’ve already completed that area, but there are a few you’ll have to play through repeatedly as you move from section to section.

I played through Yoku’s Island Express on the Switch, and did notice a few minor things that may affect your choice of platform if you decide to try it out. I had some trouble reading the map in handheld mode, but a day-one patch made some of the icons easier to see. It’s still a little tough to see where all the Wickerlings are located, but you’ll probably want to play the game in docked mode to enjoy the hand-drawn art, anyway. There’s also some slowdown when moving quickly from area to area using the fast travel system. It’s possible other platforms don’t have this problem, but it was only a minor annoyance in any case.

Yoku’s Island Express is a delight, plain and simple. It’s gorgeous, plays beautifully, and I hope it’s the start of a new franchise, because I want to play a lot more of this.