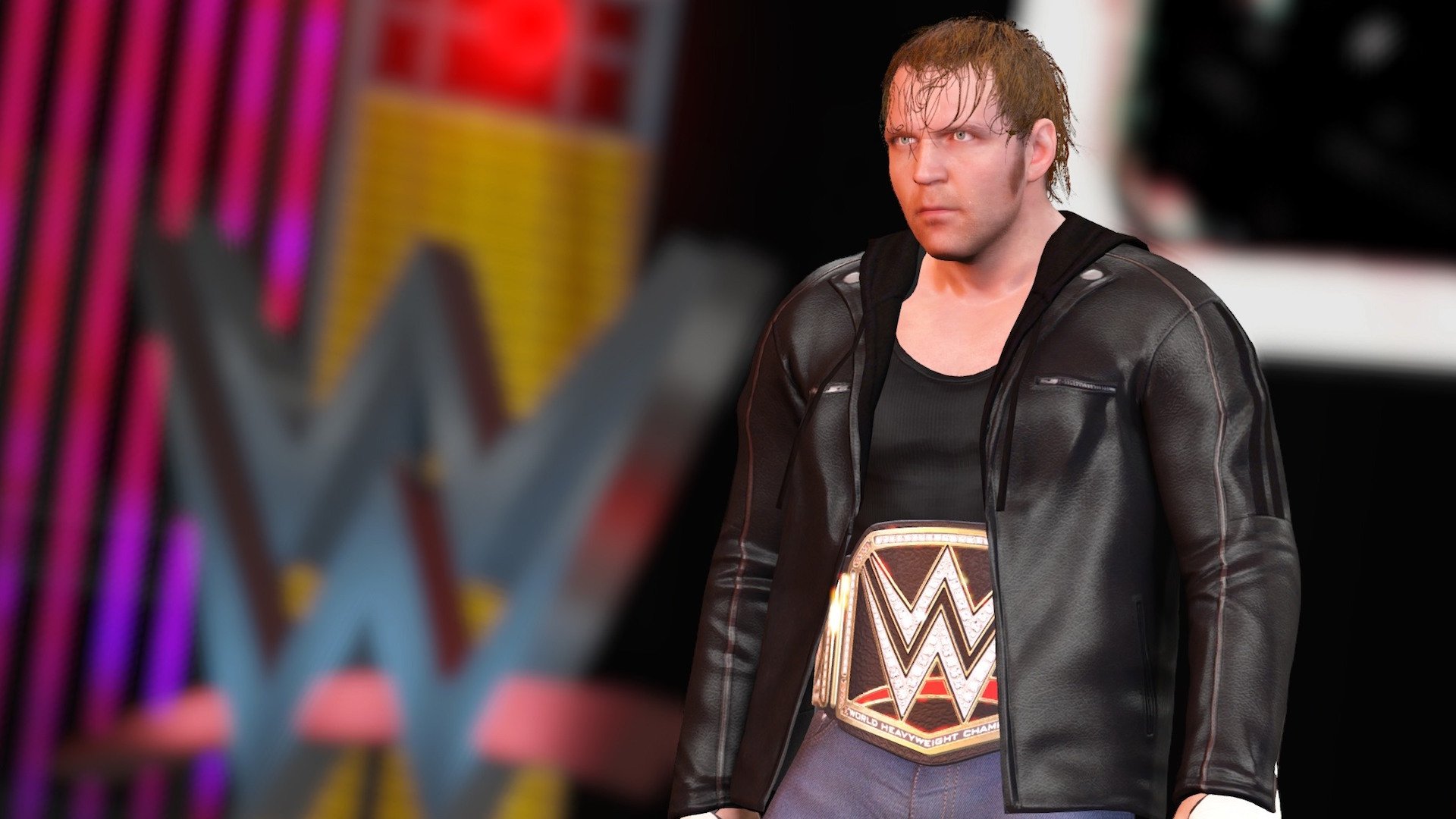 Look, I don’t know what I expected. Whenever I talk to fellow pro wrestling fans about the WWE games, they often grimace before offering a handful of excuses. “It’s not as bad as last year’s” is a favorite refrain, although it rings hollow once you realize that means this year’s game is still bad.

Such is the case with World Wrestling Entertainment Two Thousand and Seventeen, A.D. It’s an encapsulation of everything people hate about the “reality” era, stapled to a bunch of mediocre gameplay modes. WWE 2K17 doesn’t even manage to clear the lowest possible bar — the fact that it is a video game starring wrestlers you ostensibly like — with a roster that hides some of its most promising talent behind downloadable content like we’re back in the early 2010s.

In fairness, WWE 2K17 is not offensively terrible; it works on a technical level, albeit not as well as you’d hope considering this is the series’ third outing on current-gen hardware. It doesn’t crash, the frame rate is perfectly fine, but that doesn’t mean it’s worth your time or your money. 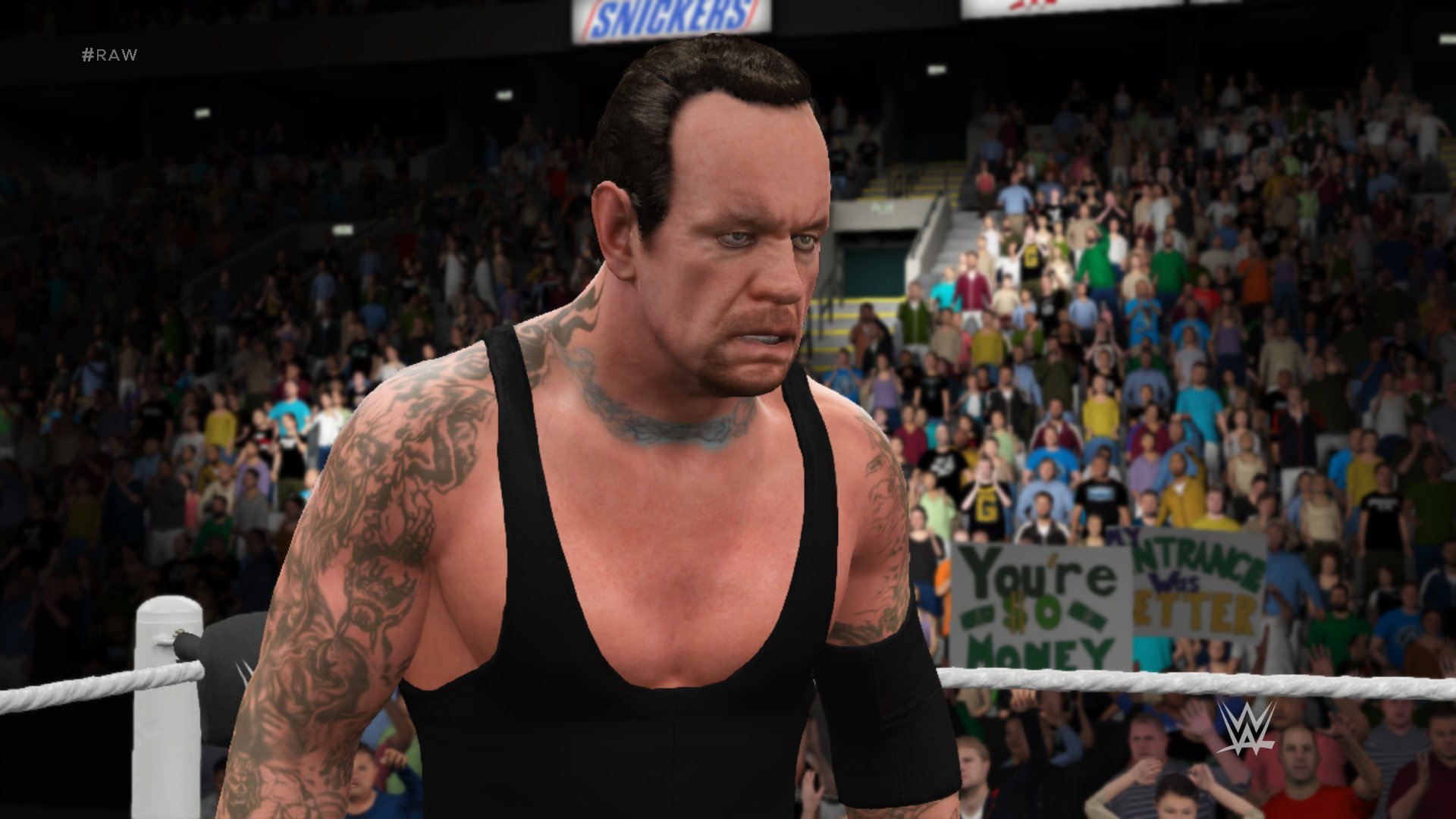 Five seconds into booting WWE 2K17, and you’ve already discovered the game’s biggest problem: there’s nothing worth doing. The game has modes, as is customary with sports games these days. You’ve got “MyCareer,” where you bring a rookie up from the Performance Center to the main roster (skipping NXT entirely, for some reason). There, you slog through week after week of WWE programming (with the unskippable TV openings mostly intact), engaging in poorly defined rivalries and slumming around the lower card.

You can actually cut promos in MyCareer, which is a cool idea that would hypothetically allow you to flesh out your custom wrestler. In practice, you jerk off the WWE Universe (read: fans) and complain about the Authority (an evil group that hasn’t been a factor since WrestleMania) if you want to be a good guy, and talk about how great you are if you want to be a bad guy. There’s no room for nuance; in an era where so many good guys are willing to play PG-rated anti-heroes, it feels misguided to penalize players for actually playing a character rather than screwing with a minigame. Even if you decided to ignore the scoring aspect, the promos are really bad — they’re not “tater tots” embarrassing, they’re just rote. There’s no personality, no bite. They could be applied to any performer, at any time.

Universe mode is a cross between the MyCareer mode and the “be a GM” modes from other sports games. You are given a year of WWE programming, and you can either simulate it and let the AI play it out, or decide for yourself how WrestleMania 32 will play out. (I had Sami Zayn, my good good ska boy, win the Royal Rumble and go on to capture the title from Triple H.) It’s fine, certainly better than MyCareer by virtue of allowing players to skip whole months of programming if they’re so inclined. However, without any restrictions imposed on players, it’s little more than a sandbox; a toy to occasionally poke at until you’re bored. Just like the real Vince McMahon!

The Universe mode does allow for some pretty neat fantasy booking, if there’s a star (Cesaro) you’ve always (Cesaro) thought could use (Cesaro) a solid push (Cesaro) but never quite (Cesaro) managed to get one. Imagining a match between Brock Lesnar and Heath Slater doesn’t quite have the same appeal as watching it play out, even if it’s within the confines of a video game. For the record, Slater came out ahead, along with Daniel Bryan, CM Punk, The Rock, Goldberg, John Cena, Roman Reigns, me, Randy Orton, Golden Truth, and Finn Bálor. I got a lot of enjoyment from taking the legendary Brock Lesnar to clown town, is what I’m getting at here. If there’s a single reason to give WWE 2K17 a look, this is it right here.

Sadly, the fantasy booking aspect is hindered by the game’s archaic DLC practices. If you want NXT Champion Shinsuke Nakamura, future Raw Women’s Champion Nia Jax, or the incredibly promising Apollo Crews, you have to either buy the collector’s edition or wait several months and then buy a DLC pack. Austin Aires, Mojo Rawley, The Club, and Tye Dillinger are locked behind another DLC pack. It’s not the same as the Legends DLC — Sycho Sid doesn’t really need to be on the roster, but the “Future Stars” pack contains people who are wrestling right now, putting on some really fun matches in the process.

I can sort of understand not having the brand split stuff in the game (the new arenas would’ve taken some work, although most of the new titles are little more than palette swaps, so maybe I don’t totally get it), but I can’t imagine a good reason for excluding these characters, some of whom have been with the company for a while. It’s like we’re back in the 2010s and necessary content is once again hidden behind a paywall. You can always peruse the community creations for a home-made Nakamura, but then you’d be missing his signature moves and the unique physicality that made him so popular. 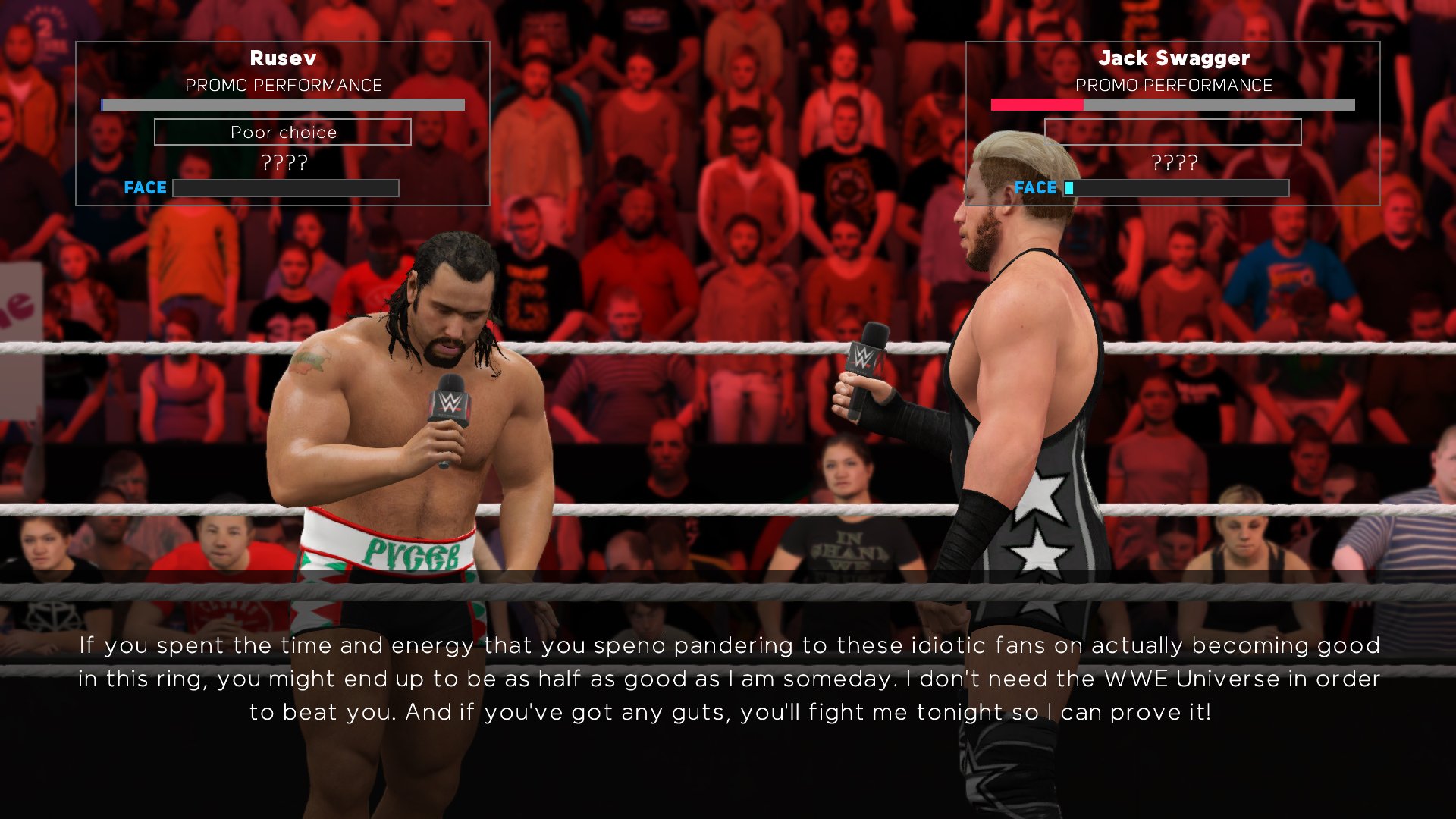 Also, this is such a petty complaint, but I think Finn Bálor is the only wrestler who manages to bring his entrance into the game mostly unscathed. Enzo, Big Cass, and Carmella all deliver their respective catchphrases like there’s a gun to their heads. The New Day is alright (Big E actually does a great job), but the trombone is just off enough to be irritating. Sami Zayn does his little fistpump well before “Let’s go!” Becky Lynch doesn’t throw her goggles into the crowd or give them to a kid. Nakamura’s pre-entrance reveal absolutely fails to capture the raw energy of his real-life counterpart. It doesn’t help that nobody actually enters during their entrance — their music hits, the camera cuts to the crowd, and then the wrestler in question just sorta appears on the ramp. For me, entrances are a crucial part of the pageantry inherent to pro wrestling. Whenever I’m at a TV taping, I love singing along to Sami’s theme song or reaffirming that you indeed can’t teach that with Enzo. To see entrances neutered like this is a huge bummer, even if they’re a big step up from last year. (See? Even I’m not immune to that line of reasoning.)

The wrestling itself is perfectly fine. Once you get used to it, you shouldn’t have any problems. Just about everything about the action inside the squared circle is customizable — you can make it so your opponents will literally never counter your attacks or you can turn even the weakest jobber into an unstoppable monster.

Reversals still feel iffy, completely unchanged from the similarly inferior 2K16. In games that ape the Arkham style of combat, you hit the counter button when you’re about to be hit. Here, it feels like you’re supposed to counter when it’s most convenient for the game to interrupt an animation, not when it feels natural to counter a move. You don’t counter when you’re about to be punched, you counter when your opponent is setting up for the punch. It can be immensely frustrating if you haven’t memorized the game’s suite of moves. Even when you do get the hang of reversals, there will still be parts of a match where you’re frantically jamming on the right trigger so you can actually do something in this video game. 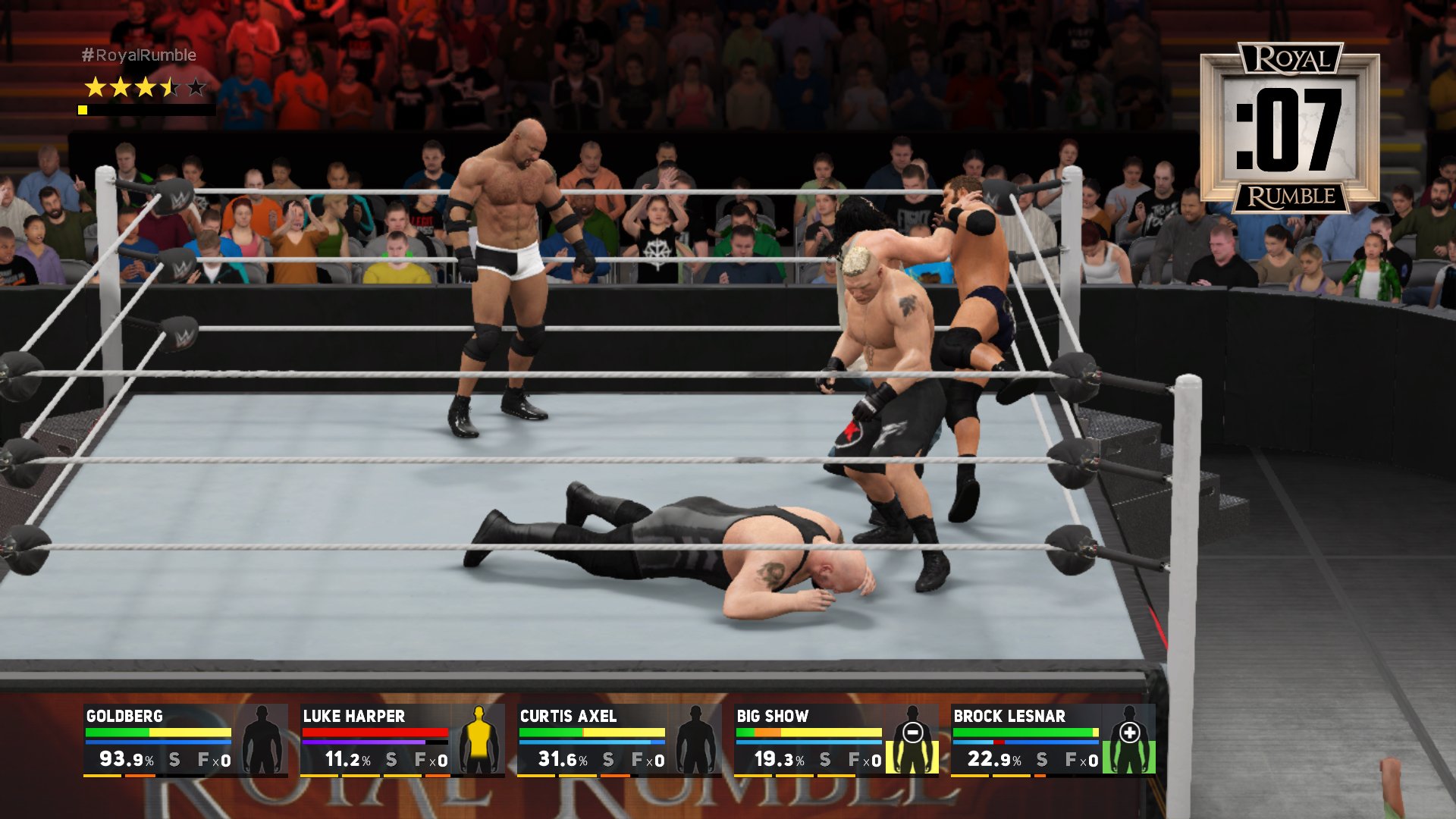 A bunch of small things about the in-ring action bug me, like the targeting in the Royal Rumble or the finicky nature of corner work, but all the small nitpicks would be excusable if the fights were exciting — and they aren’t. The default options make the game boring, turning pro wrestling into more of a sport than the spectacle you recognize from TV. You can fine-tune or even turn off mechanics like stamina or reversal limits, but then matches are too easy.

You can also make an entire roster’s worth of custom characters, TV shows, and championships, if you’ve got a free Sunday and you live on a deserted island with literally nothing else to do. I’ve also got a theory running that Yuke’s has started making wrestlers in their own create-a-wrestler. Seriously, look at Kevin Owens and John Cena’s character models next to each other. Cena looks almost photorealistic, and Owens looks almost unrecognizable.

WWE 2K17 is a poor simulation of the WWE product, often because it seems ashamed of pro wrestling. This is a television universe where Jon Stewart has interfered in back-to-back SummerSlams — you either get on board with the nonsense or you give the license to somebody else. Adding a promo mechanic is a vague half-step towards acceptance, but it almost feels like an obligatory nod to the parts of the show where people talk into microphones. WWE’s current weekly programming is arguably better than it’s ever been; that level of quality deserves a game to match. That game is not WWE 2K17.

Also, they got Finn Balor’s Demon costume wrong for the second year in a row. C’mon.